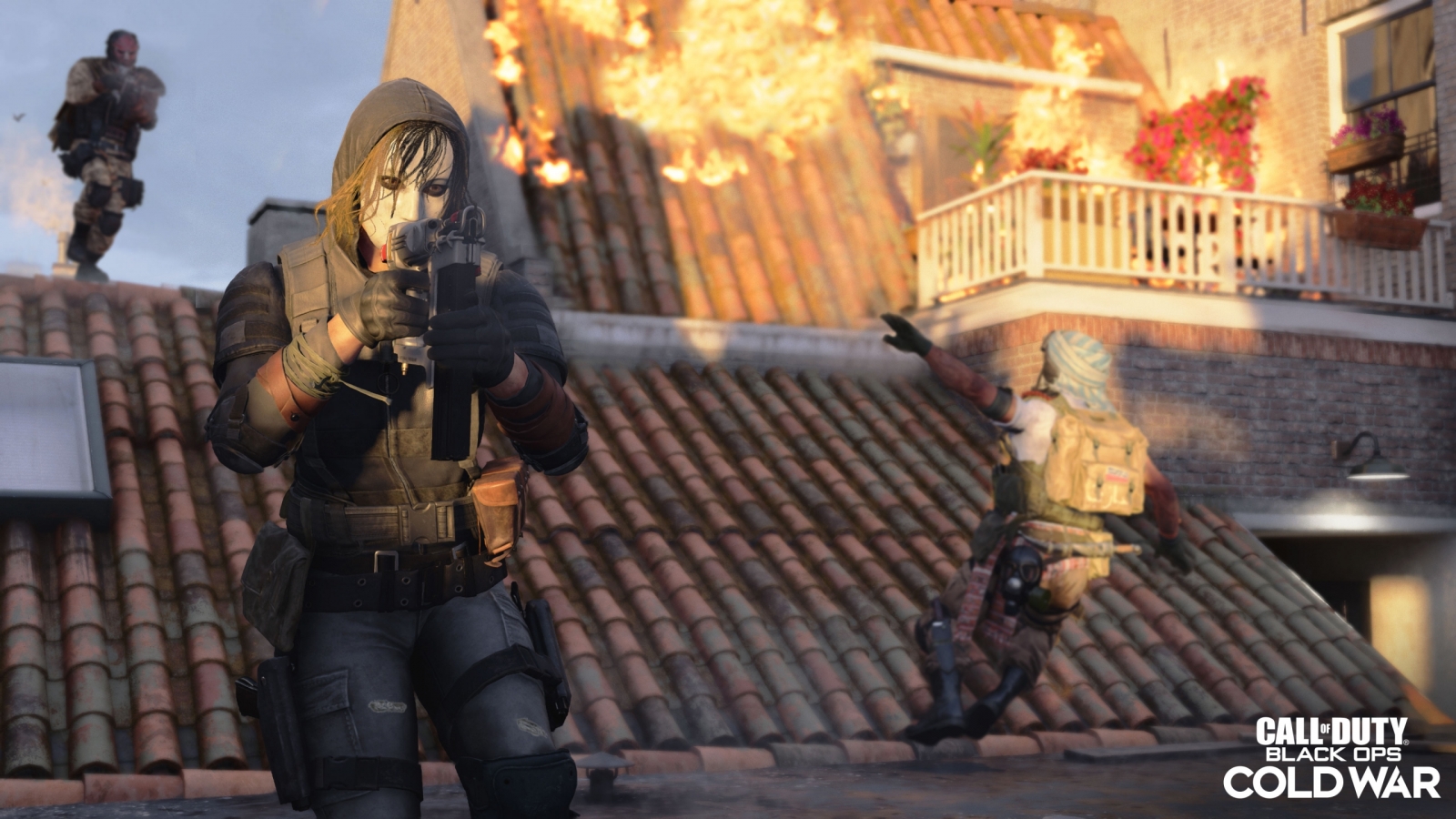 This season was always going to be a weird one. It’s the midway point of the current Call Of Duty game, with the next one assumed to be coming in November, and there may be a little bit of fatigue kicking in. I’ve put almost six days into the multiplayer so far (my account shows 162 hours), so I’m only thirty-eight hours away from my all time high of two hundred in Modern Warfare 2019, and given I’m most likely breaking that record I’ve been looking for other ways to change up the gameplay while I wait. The seasons do a decent job of that; the start of Season 3 definitely felt like more of a good thing, and while not bad still left things feeling a little labored. With the beginning of Season 4, I feel good about the content, but I do worry that I’ll be right back to that weary feeling if the grind doesn’t get a little less… grindy.

I know this sounds like doom and gloom, but let me be straight with you: this season’s offerings are still enjoyable. My opening paragraph makes it sound like a drag, but never fear, there is some good stuff here. Treyarch has plenty to offer this time around, and they’re pairing a big drop at the beginning with a still meaty, smaller addition mid-season. While I’m looking forward to some of the mid-season items, especially the OTS 9 submachine gun, there is plenty to like even if it doesn’t fit my playstyle as well. This is something to bear in mind: I play a fast moving, entry man, route running SMG role. While I push to figure out all maps, some just aren’t going to work as well for me as say, the more compact Crossroads Strike map.

Since we’re already talking about maps, let’s discuss those. Hijacked is the one you’ll remember right away, with a big yacht in the middle of the ocean that is mysteriously missing passengers and returns from Black Ops 2. I guess to make up for it, special forces dropped in and there’s a lot of chaos to this map. One of the things I didn’t realize was how much vertical gameplay is in this one, with three levels to the boat; an engine room beneath, the main deck, and two large second story rooms overlooking everything. There are a lot of places to cover, and it certainly seemed like during gameplay there were plenty of people camping in corners, upstairs, and especially in the engine room. We actually ran into a full stack that sat down beneath the deck, armed with Streetsweeper shotguns and a bunch of trophy systems to combat grenades. I don’t know that there’s a much cheaper way to play this map, but that definitely lends itself to that happening on the regular.

The one that I absolutely love is the 2v2/3v3 map Amsterdam, although it’s only running as 6v6 because of the current mode. Built on sprawling rooftops that feel ripped out of the opening campaign level of Black Ops Cold War, this is exactly the kind of new map I want, but it’s relegated to one specific small mode. This is an SMG’s paradise, small spaces, back door lanes to flank through, the works. I hope there are plans to grow this map into a permanent 6v6 one, because if it were I may never want to leave it. I’ve been begging for a long time for High Rise from Modern Warfare 2 (one of my favorite maps) to get it’s remaster, and while that wouldn’t happen in a Black Ops game this is close.

Collateral is the other 6v6 map to drop, and while it’s new it also feels familiar. This one is a sprawling, abandoned Algerian town, and it’s very similar to Hijacked in there being plenty of verticality (although only two stories as opposed to three), along with a bunch of open areas. I found this one and Hijacked to be ruled by the flank, as even in 6v6 you can lose sight of opponents who simply rotate to another side. There are plenty of windows and hiding places to post up with more stationary weapons, but the flow does allow skilled players to knock people out of them, with multiple angles to attack each one from. The map also has plenty of lanes to it, but unless you can really rock an SMG out in the open it’s probably best to pick up your assault rifle or LMG.

Speaking of AR and LMGs, the season starts out with two new ones available at levels 15 and 31 of the battle pass. The MG 82 is another light machine gun that probably needs a big nerf, not necessarily because it’s quick, but because it’s powerful. Even focusing on attachments offering speed didn’t bring me close to the movement I prefer when playing the game, but when you can just blind fire in a random direction and get a few picks it doesn’t matter too much. This gun will definitely find its way into the hands of people who want to exploit it, so it’s worth keeping on hand to fight fire with fire.

As for the assault rifle, the C58 isn’t going to turn any heads, even if it does blow a few off. This gun is decently accurate, packs a punch, and can be semi-fired more easily than its counterparts. The problem with that is that the C58 is way too slow in fire rate, and it’s even worse up close, with a slight delay in pulling the trigger to firing compared to other assault rifles. Once again, I’m an SMG main, so my complaining is going to sound silly as someone who generally opts for an XMR and Groza, two ARs that can be outfitted to my preference. But the C58 certainly isn’t going to be a better pick than the Krig 6 or Fara 83, two weapons that are certainly at the top of the AR list. It’s good, but if you’re playing to be competitive you’re not going for it first.

Now, I can’t finish up talking about weapons without covering the Nail Gun, which I absolutely freaked out over when it was revealed. This gun has led to way too many people using the M79 grenade launcher, as this one is unlocked by getting five eliminations in fifteen different matches. If there’s anything that infuriates you as a COD player, it’s constant grenade launchers firing. The Nail Gun itself functions almost like an automatic pistol, although the bullet/nail drop is definitely more substantial. One thing that is frustrating about playing against someone using it is that it is a Special weapon, meaning the projectiles continue on after your opponent dies. I had way too many moments where I thought I had a kill and was moving on to the next point, only to die a split second after from a wayward nail that was fired. This is one of the few weapons I think should function like a pistol, where your death cancels the gunfire.

One of the things I’ve gotten really thrilled about is the addition of new modes, and while there weren’t a ton of new ones as this year did launch with a lot, I want to point out two in particular: Hardcore Hardpoint and One In The Chamber. First off, HC Hardpoint. As I’ve mentioned before, I’m a hardcore player, I just enjoy the speed and strategy of the game type. But for reasons unknown to me Modern Warfare 2019 never had Hardpoint available as a hardcore variant. The streak continued at the launch of Cold War, and I’ve been left recently to grind in League Play to enjoy the competition of the mode, but not any longer. Hardpoint is essentially King of the Hill, but the hill moves, so rotating and flipping spawns is a big part of it. Yes, like Domination there are a lot of kills to be had, but this mode promotes teamwork if you want to win, and my group has had a ton of fun playing it. As for One In The Chamber, I’m more excited about this one for those times you want to switch it up and play custom games with friends. It and Gun Game aren’t generally much fun in public lobbies, but get about 6-8 buddies online and you’re going to have a blast.

Lastly, the battle pass this season is honestly still one of the best purchases in gaming, and the 100 tiers are worth the grind. Besides the new weapons not being my preferred choice as I alluded to above, the pass is again packed with plenty of COD points, Double XP tokens, calling cards, emblems, reticles, and operator skins. I’m really happy with the abundance of great weapon blueprints, not that the other passes have been missing them, but because these are a step above with some really cool designs. While I think the use of it in multiplayer is a bit silly, the very first reactive operator skin is available at the end of your battle pass journey, and while it’s one of the neatest ideas out there, I’m not sure being flashy on the battlefield is exactly what you want when trying to clutch a 1v2 in Search & Destroy.

Overall, there are some good offerings in this season, and I feel like there are even more promising additions coming mid-season in the OTS 9 SMG and the next big Zombies expansion, Mauer der Toten. But the opening to Season 4 seems like something more meant to tide me over for the next big thing rather than the reason for you to pick up a copy of the game. While I do enjoy what Treyarch is doing, the map choices feel like they’re relying a bit too much on nostalgia when what I want as a player is new experiences. Some locales like Standoff are iconic, but I don’t want half my play time to be spent “in Black Ops 2”. Maybe we’ll see that change in Season 5, but I wouldn’t count on it. Now if you’ll excuse me, I have a ship to hijack for the umpteenth time.