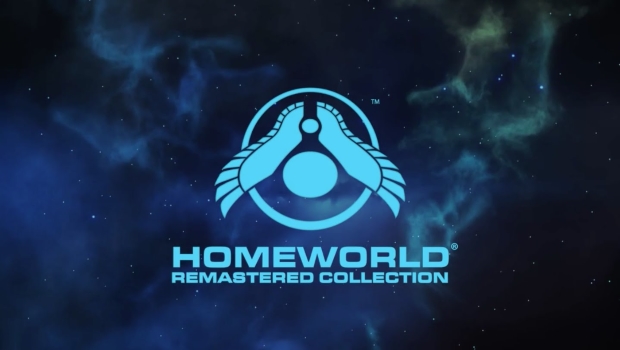 Those words, first stated in the original Homeworld all the way back in 1999, started a space epic that I was unable to put down until I finished. The second I heard them again at the beginning of Homeworld Remastered, I knew I was in for that same sweet ride that I’d first experienced when I was a kid. Little did I know that I wouldn’t just be taking the same ride, I’d be taking one that surpassed it.

What Gearbox has done with Homeworld Remastered shows just how valuable actual remasters of old games can really be. While other similar collections of old games being brought to a modern audience are content to just bump up the aspect ratio of the graphics and let the game be experienced as originally intended, Remastered goes the extra mile and strives to improve on the original without diluting why the source material was so great in the first place.

This game has some great backgrounds.

The gameplay itself is what really impressed me about this collection. Since Homeworld came out in 1999, the gameplay wouldn’t entirely hold up today. Going back to check out the Classic edition included with this collection shows just how big a difference small changes to the control scheme can make. Instead of leaving controls that would be considered sub-par today intact, the method of ordering around your ships and the UI have been vastly improved.

If you’ve played Homeworld before, you’d remember that to interact with the game required you use a menu you’d pull up by right-clicking a ship. In order to move a unit, you’d need to pull up a movement disk using a hotkey. Now you can bring the movement disk up with a simple click, and this alone makes the game vastly easier to play. You can still access the menu if you really need to by holding shift and clicking on a unit, but more frequently you will find yourself issuing simple orders like harvesting by clicking on the sleek new UI.

There are a few minor annoyances with controls when it comes to selecting units that are grouped together, and sometimes the UI makes simple information (like being able to see what action a unit is performing, which you can’t without actually seeing the unit in question) hard to come by. But for the most part, Homeworld has been updated to feel and play like a modern strategy game. In fact, with its 3D movement offering such a variety of available tactics, I’d say it’s even somewhat stronger than many of its modern contemporaries.

That’s extremely impressive, considering that with a few small improvements and a new user-friendly interface, Homeworld has been updated to what I’d expect from a modern game. It shows just how strong the original title was that after a few small changes it holds up today. Yet the strength of its gameplay isn’t quite entirely why many (including myself) consider Homeworld and Homeworld 2 the best strategy games of all time. Rather, it’s the fantastic campaign.

The sleek new UI makes commanding your ships easier then before.

The campaign which still holds strong even today, with its strong narrative. Never have I felt so compelled by a story told in a strategy game, never have I felt so attached to the experience of a story told only through disembodied voices. That’s just how strong the writing is, that moments of wonder and even sadness can leave such impressions on me without any face to truly root me within the universe. Strategy game developers today could still learn from such atmosphere and storytelling, as no other game in the genre has managed to keep me invested in a story for such a long time.

There is also a strong feeling of progression. This feeling is born from the consistency of the campaign, where every ship you build and every resource you collect carries over to the next mission. It makes you really feel like you’re guiding these lost people across a journey filled with enemies, both natural and civilized. I felt bound to the forces I built up, because they were my own, and I saw the fruit of my work in every mission as my fleet grew bigger and more powerful to take on my ever stronger and more diverse foes.

Speaking of diverse foes, the campaign also successfully puts you in a wide variety of situations. You will find yourself having to create new strategies to take on different challenges. Some are environmental, and some are adversarial, but each challenge is different. How do you take on a ship that disables your capital ships? How will you battle a foe that uses only strike craft? These are just some of the questions you’ll have to answer as you adapt to your ever changing hostile and gorgeous environment.

You really feel like you’re guiding a lost people to a new home.

That’s the second time I’ve used the word “gorgeous” now, and that’s because that term perfectly applies to this games presentation in every possible way. Not only is that UI nice and clean, but the visuals and audio make you forget that some of the code for the game you are looking at was written over 15 years ago.  The attention to detail on the movement of the guns on the larger ships, the explosions, the nice lines on the varied ship models — I could go on about how pretty this game is. Even the environments look great, and the whole thing takes place in space.

I have to save something for my final review though, so stay tuned for that. In the meantime, just know this — while I haven’t finished enough of Homeworld Remastered to review it, I have played more then enough to recommend that if you are a fan of space titles, strategy games, or even just good science-fiction stories then look no further. This is all without having even touched the multiplayer.

This game is an incredible deal. You have two classics remastered into titles that feel modern, and access to the originals and all the great mods that have been borne of them. Whether you are a long-time fan, or a player who wants to visit these masterpieces of strategy game design now that they’ve been updated, you will find a long game with a lot of quality content and the spectacle of awesome space battles you won’t find in many other titles.

My name is Niko, I'm currently 20 years old. I spend most of my time on my computer gaming as I got hooked on videos games from a young age. While my first experience with video games was with the Gameboy Color, I first got seriously into games while using the original Dreamcast and the PlayStation 1. I played many games back then, but the highlights were definitely Pitfall 3D, Pokemon Blue, Rayman 2, and Ecco the Dolphin Defender of the Future. All games that I spent many many hours on and filled the long hours where I stayed at home mostly by myself thanks to living in unsavory neighborhoods. From then on, I pursued a lot of video game consoles. I was particularly enthralled with the Super Nintendo and Nintendo 64. As I grew up further, my tastes shifted and I tried more and more games, especially after I got a PC. My first experience with a PC RPG was Star Wars Knights of the Old Republic, and it was really the game that made games an integral part of my life. I played video games a lot back then, but ever since playing KOTOR I've been a lot more opinionated and interested in games. I even entertained the idea of wanting to be a developer at multiple points, but I just didn't have the skillset. Still, KOTOR ignited my interest in video games as a way of telling stories. I loved the ways video games could tell such large and complex stories, combining the best parts of every other medium of entertainment with the unique pieces of what video games themselves offered. Now, my favorite genre is definitely RPG's. With my primary interest being the story driven ones. Though, I still enjoy my occasional shooter and action titles I enjoy mostly great cinematic titles with good stories. Though I also enjoy the Stealth, Strategy, and Action-Adventure genres quite a bit. I also think that the PC is a wildly superior platform to any console, due to the wide variety of options. Whether it be in graphics, mods, or the selection of games themselves.
Related Articles: Homeworld Remastered Collection
Share
Tweet
Share
Submit