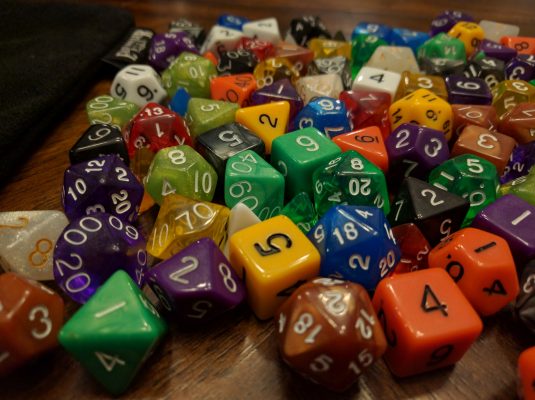 I’ve been in the videogame business for a long time, but many of you might have noticed that I also tackle D&D reviews, as well as the occasional dabble in tabletop games. I’ve been playing the likes of GURPS, Dungeons & Dragons, Mechwarrior, and Shadowrun as far back as I can remember.

Recently I moved to Texas, and my moving company decided now would be a great time to steal or destroy nearly $18,000 worth of my things, including nearly ALL of my books, dice, modules, a full-size Chainsword replica, and more. While I was lamenting the loss of my childhood, I realized I was going to need some new rollers in addition to books for replacements.

Checking out Kickstarter, I ran across a company named Easy Roller Dice Co. They were running an effort to bring solid metal polyhedrals to RPG and tabletop gamers alike, but they also have a store with a large assortment of dice and bags on offer as well. Their Kickstarter was wildly successful, driving to $39,269 of a $7,000 goal. Knowing that I needed at least four sets of D10s for Munchkin levels, a handful of D6 for fireballs, and D20s for random chance rolls, I picked up their “bulk dice set” for a diverse array of rollers.

A great assortment for the price.

I expected a plastic bag full of plain dice, but was surprised to find everything came in a soft black velvet bag with a blue satin lining. The bag is punctuated with a thick braided double drawstring. The satin interior prevents dice from picking up any fuzzy remnants on the odd rough edge, not that I found any here. The bag also has a double sided tag with the Easy Roller Dice Co. logo, so your friends will know where you nabbed your bones.

The assorted dice pack comes in array of colors, types, and construction materials. I grabbed the largest set, coming with 105 dice in a bigger bag. All of the dice are “factory first” meaning that they aren’t recycled in any way — something many manufacturers cannot claim. The set truly is an assortment, sporting opaque, glittered, translucent, and color swirled dice. Some colors lend themselves better to the different processes — brown color swirl isn’t as good looking as the hematite-like black or smoke swirled dice.

I wanted a specific set of dice, so in addition to the assorted bag, I also nabbed a set of 10 called “Black Smoke.” Arriving in a smaller felt bag, the set is comprised of a D4, four D6, D8, D10, D12, D20, and a 10-sided D100 (percentile) dice. You can also get them in a set of seven that eschews the spare D6, but with fireball taking upwards of eight D6, I wanted the spares.

My wife is a huge fan of copper, so these were a no brainer.

While they won’t be available to buyers until the end of July, I also got my hands on a pair of metal dice. My wife has an unnatural obsession with copper, so I had an obvious interest in the “Legendary” set. My personal preferences run darker, so I wanted a set of the “Serpent’s Blood.” Both come in a solid leatherette case, with a foam cutout in the shape of each of the seven included dice. It makes for a gorgeous display case, and these are certainly worth showcasing.

These turned out way better than I could have hoped.

The metal dice have a heft to them. Solid to the core, they weigh four times more than a standard die, as you can see below — 0.2oz versus 0.8oz, consequently. As a result, they are what I’d call ‘impactful’ when you roll them, landing with a solid thud. We fixed this by using a felt rolling surface, allowing the die to clunk about without scratching the table wood. I have to admit — they bring a certain satisfaction to the game, and they make a hell of a life counter. The first time I rolled them at my local geek shop, I had a small crowd of folks suddenly paying attention to my game. Putting them back in their case, I also heard several folks appreciating that each die has a form-fitting space for storage.

There is a good heft to these dice.

I tend to be a mise en place (everything has a place, and everything in its place) sort of person, so the last thing I nabbed from Easy Roller was one of their large bags to store everything. These things are a little bit of beauty. Reversible, one side is black, and the other is red, replete with a leatherette wyvern on the side, they are large enough (7”x5”x5”) to hold the 105 dice, the small 10 pack, and both metal dice display boxes, with space enough to still draw the strings. For $19.95, they are a must-have for anyone wanting to keep all of their dice from rolling off after a long session.

These bags are amazing!

The large dice bag gave me a product idea for Easy Roller — I’d love to have something of similar quality to use as a rolling surface for the metal dice, though the bag itself does nicely when empty. Beyond that, I was surprised at just how high quality the entire package is. Like monitors and keyboards, many folks don’t pay attention to the peripherals of tabletop gaming. While a good set of quality dice won’t necessarily make you a better Mechwarrior, or land more critical hits, it does help reduce “clutter aggro” by collecting my rollers in one sheik place.

If you want to pick up any of these items for yourself, drop by their website and tell em I sent ya!

Ron Burke is the Editor in Chief for Gaming Trend. Currently living in Fort Worth, Texas, Ron is an old-school gamer who enjoys CRPGs, action/adventure, platformers, music games, and has recently gotten into tabletop gaming. Ron is also a fourth degree black belt, with a Master's rank in Matsumura Seito Shōrin-ryū, Moo Duk Kwan Tang Soo Do, Universal Tang Soo Do Alliance, and International Tang Soo Do Federation. He also holds ranks in several other styles in his search to be a well-rounded fighter. Ron has been married to Gaming Trend Editor, Laura Burke, for 21 years. They have three dogs - Pazuzu (Irish Terrier), Atë, and Calliope (both Australian Kelpie/Pit Bull mixes).
Related Articles: Easy Roller Dice, Tabletop
Share
Tweet
Share
Submit