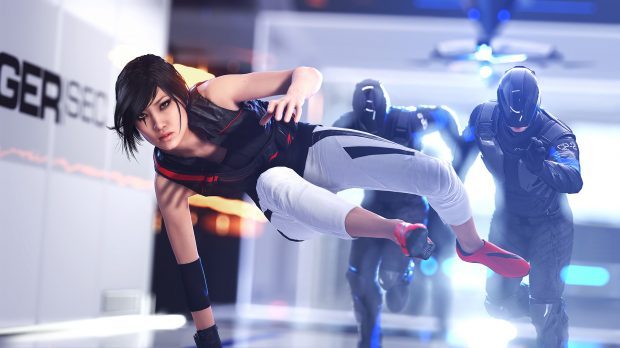 Fans have been asking for a follow-up to Mirror’s Edge for a long time, and with DICE’s ambitious open-world prequel, called Mirror’s Edge Catalyst, players will finally have the chance to jump back into one of the most beautiful dystopian futures seen in gaming. However, although Mirror’s Edge Catalyst delivers the core things that are important to a Mirror’s Edge successor, in many ways the title falls flat in delivering the sequel that players have been hoping for.

Mirror’s Edge Catalyst is a prequel to Mirror’s Edge and tells the story of Faith, a brooding youth recently released from juvie, and who is a part of the “runners,” an illegal organization that trades information on-foot via traversing the rooftops of the City of Glass. The City of Glass is a not-at-all sinister sounding dystopian dwelling, where each citizen’s actions are monitored by The Conglomerate, a mysterious organization who controls everything. Throughout Mirror’s Edge Catalyst, Faith embarks upon her task of rebelling against the powers that be, and disrupting The Conglomerate’s plans.

Unfortunately, the storytelling in Mirror’s Edge Catalyst is one of the weakest aspects of the overall experience. Predictable, uninspired, and full of contradictions — the narrative does not draw the player further into the world of Mirror’s Edge. One issue is that the player learns a lot about the world in Mirror’s Edge Catalyst from a second-person perspective, rather than seeing/being involved in those events. In one case, the player learns that one character is becoming more violent and unpredictable when a character contacts you via comms and says something like “She’s becoming more violent by the day. I heard she shot a ‘traitor’ the other day.” In another instance, we learn offhandedly that the world has a dire water shortage when a character mentions casually, “not a lot of people know this, but water is becoming a scarce commodity.” Most notably, however, we keep hearing characters talk about “the greylands,” where those who have been banished from the city of glass are forced to go, but we never see it or learn anything substantial about it that impacts the story.

When the narrative of Mirror’s Edge Catalyst isn’t telling the player about important things that it would have been more fun to experience first-hand, it’s throwing a barrage of cliches, obvious twists, and contradictory anecdotes their way. Just a few of the cliched characters include the quirky, robotic hacker who doesn’t understand human emotion, the mob boss character who likes to cook food while he’s intimidating people, and the paranoid, violent, and unreasonable rebel leader character. Mirror’s Edge Catalyst doesn’t have a lot of original narratives archs either. Without going into spoilers, I’ll say that the plot twists will be immediately obvious for a lot of players as they’re predictable and far from original. Even worse than that are some of the themes, specifically regarding the opening and closing monologues of the game containing clear contradictions from a storytelling perspective that simple don’t make any sense.

The free-running in Mirror’s Edge Catalyst is incredible, and is without a doubt the star of the show. It’s very much a step up from Catalyst’s predecessor and every bit as fast-paced, complex, and adrenaline-inducing as players would have hoped. Players have a few new tools at their disposal to improve running as well, including a grappling hook, and a whole slew of new abilities that are available via a character progression system. Overall, I have very few complaints about the core mechanic that is the hallmark of the series.

The combat, on the other hand, serves as somewhat of a counterweight to Mirror’s Edge Catalyst’s incredible free-running experience. Faith has no weapons at her disposal, and so uses melee attacks, and her superior mobility, to take down foes. In certain cases, combat is a lot of fun — specifically when the player is running past enemies, knocking them to the floor, or shoving them off a balcony while continuing to escape. In many instances, however, the player is trapped in an area and pigeonholed into fighting a group of enemies, which makes up some of the most unpleasant sequences in the game. In order to succeed, the player either has to run around in circles, and try to jump on all of the enemies, or chip away at their health with weak punches and kicks. Sequences of forced combat like this simply aren’t fun, and seem extremely out-of-place for a game where the protagonist is made out to be an underdog, when she is apparently able to take on a dozen trained combatants toting guns and wearing heavy armor with her bare hands.

The open-world elements of Mirror’s Edge Catalyst provide opportunities previously unavailable to players, many of which will provide countless hours of entertainment. Collectibles, side quests, and optional areas litter the rooftops of The City of Glass, and the player can explore every inch of it. Furthermore, a multiplayer element allows players to create custom challenges, and invite their friends to try to best their records. Unfortunately, when it comes to trying to get from one place to another quickly, the open-world element can also be massively annoying. For example, I found myself traversing the same dark hallways and recognizable rooftops again, and again, and again, as I sprinted from one main quest location to another. It would have been nice to be able to fast travel through parts of the city that I had already traversed, because by the end of the game, I came to despise certain areas that I was forced to slog through time after time.

Mirror’s Edge Catalyst’s presentation is top-notch. This is best showcased during escape sequences, wherein the music is tense and fast-paced, and the player hears bullets hissing past their face and Faith’s heavy breathing, as they scramble from rooftop-to-rooftop. The City of Glass is enormous, beautiful, and nearly everything is sterilized with a shiny white coat of paint that often goes hand-in-hand with a dystopian/utopian city. As the player gains access to new areas in the city, they’ll be stunned by the massive vistas that the skylines of the City of Glass offer. Especially impressive, is the level of detail that can be seen in the city below the rooftops, which the player never visits. Cars occupy the roads below, and buildings and streets have a surprising level of detail, which is showcased whenever the player misses a jump and falls to their death on the ground below.

Mirror’s Edge Catalyst is a gorgeous game that nails the free-running experience that fans want, but lacks an interesting narrative, compelling combat, and a fast travel system that will likely leave many fans disappointed.

You know that jerk online that relentlessly trash talks you after every kill? That guy was probably Travis "Tie Guy" Northup. Competitive, snarky, and constantly wearing a tie, Travis has been writing his opinions about electronic media since he was a teenager, and is pretty much the only person to hold his opinions in high regard.
Related Articles: Mirror's Edge Catalyst
Share
Tweet
Share
Submit