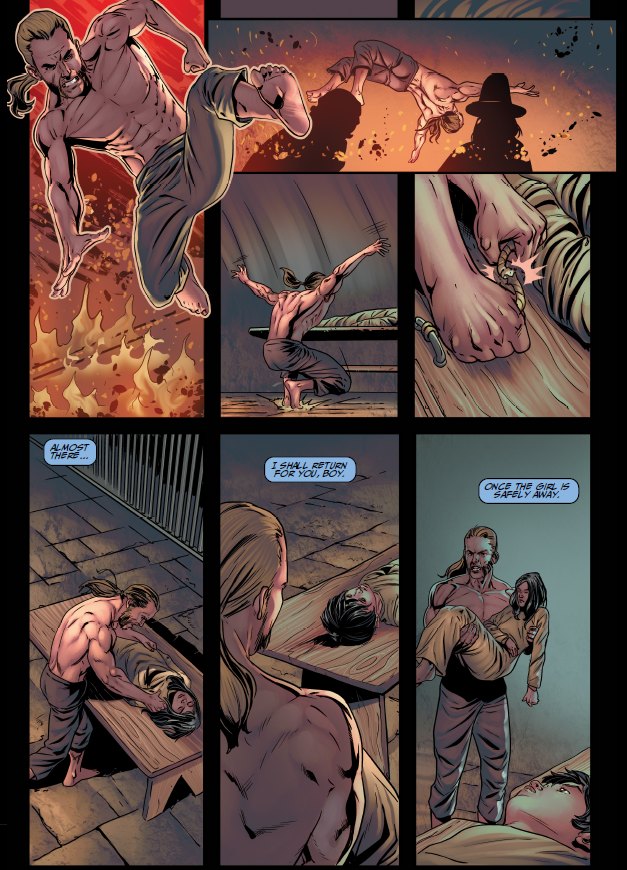 The fourth installment of the Assassin’s Creed comic series continues to follow the exploits of hard-hearted Assassin Tom Stoddard as he seeks to safely secure an artifact that could tip the scales of power between his and the Templar clandestine factions. Modern day gamer-turned- rookie-assassin Charlotte (Char) continues to mentally piggyback over the course of his mission via the power of the Animus device, which true to the video game franchise’s lore, allows an individual to consciously relive periods of their ancestors lives.

After the twists and turns of the previous episodes, our surviving revolutionary era heroes find themselves in even deeper trouble than when their daunting mission started. Stoddard’s risky but well laid plans have fallen apart, and his objective looks as if it will not only fail to reach his fellows in the Assassin Brotherhood, but fall into their adversary’s grasp.

The fourth issue of the Assassin’s Creed mini-series performs well as the story’s ultimate rising action and brimming climax. The tension is high, the outcomes are unpredictable, and the results are believably dramatic. Where the earlier books were still working to sell me on their quality and execution as a new project, Trial By Fire is leaning on that confidence it’s built and bringing you home to a conclusion.

However, there are ultimately several stories at play here between the modern day Assassin cell that Charlotte has found herself allied with, her ancestor Tom Stoddard’s current journey, and their own individual emotional revelations. By the end of this chapter, while possible, it’s not looking as if all your questions as reader are going to be tied up in a neat little bow by the end of this mini-series.

That begs the question, if the fifth issue is going to leave some things open ended, will this story arc still feel complete enough stand on its own?

Assassin’s Creed comic #5 completes the circle (or at least the origin circle) of Charlotte’s induction into the Assassin Brotherhood and her maiden voyage into the minds of her ancestors. Her first virtual host, the revolutionary war era Assassin, Tom Stoddard, has seen the end of his mission (for better and worse) and now Char must decide if she’s interpreted her visions accurately and deciphered how they apply to her current situation.

This issue quickly and effectively mirrors the stakes set in Stoddard’s historical mission against Char’s modern-day circumstances. Although Char conceptually understood that Tom was known as a ruthless Assassin and his reasons for it, she never saw past the venire that she was riding atop his mental coattails via Animus. She, as a character, placed herself in the position of just being a snarky youngster passing judgement on a different, more ignorant, era and way of life. She was stubborn against acknowledging those differences to further her insights.

Now being forced to see the similarities between the old and current world’s more ruthless underbellies, Char is coming to grips with the reality that cold-hearted decisions can be forced upon you in a variety of ways, even by accident.

This issue takes place entirely in the modern day, and follows the members of Char’s Assassin cell as they reach the end of what this mission has in store for them. It’s a solid end to what has proven to be a well-crafted story, but doesn’t stand up on its own as well as some of the other entries have.

I really enjoyed this series as a whole, and look forward to the next installment if and when it happens.

To get our take on the whole thing, look out for our upcoming review of the entire series!

I've been a huge fan and critic of games and movies ever since I had a voice to speak about them. I love power and influence of great storytelling, interactive and otherwise, and now want to be more than just a consumer. My biggest strength in this regard? Almost every time, I'm fair all the time.
Related Articles: Assassin's Creed, Beyond the Page
Share
Tweet
Share
Submit