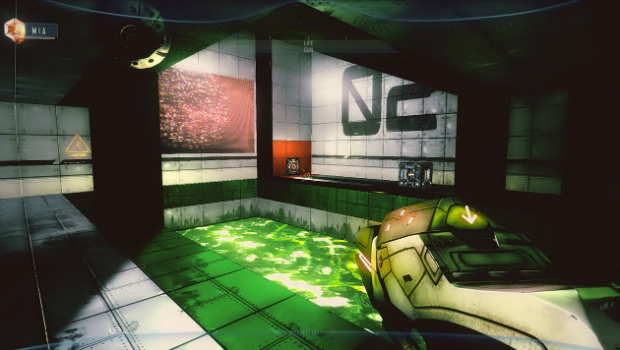 While current trends indicate that TV is on the outs, video viewership is still a key piece of our entertainment consumption. Nothing can prepare us for the scrolling madness that will be future video delivery, but a few fun guesses on what we may see is never a problem.  The format, world, content, and supposed delivery may be intriguing, but is the show any good?  Despite a few stupid flaws, Attractio is both a good game and a good show.

Attractio is a first- person puzzler set in a post-post-industrial solar system where terraformation has necessarily expanded human life across all planets.  With the billions upon billions of humans needing both an escape from a long day and a heroic goal to cheer on and obsess over, Attractio provides a bloody and challenging televised puzzle-gauntlet, akin to American Ninja Warrior but with 100 percent more death, set in space.

The game is played through vignettes of three characters, as they compete in different sectors of the giant spacecraft that is Attractio’s set.  This allows the game to tell three distinct stories, but it also expands the gameplay into three separate styles.  The stories are humdrum, with a murderer who claims he was framed going for a freedom prize, a cop from a fringe outpost looking for an advanced technology prize, and a benevolent factory worker who wants a monetary prize.  The characters aren’t very interesting and all have that hypercute bug-alien stare of putridity on their faces that has been made famous in the various Sims franchise games.

Looks aside, the game’s three characters create three distinct experiences while playing.  The goal is to make it from point A to point B while avoiding obstacles and using boxes to trigger switches, block laser paths, create ledges and stairs, and other applications throughout.  The vignette style of the story progression serves to split the game into individual puzzles, and each of the three characters hasve a distinct power pertaining to gravity, such as boots that can reverse it or a gun that can assign directional gravity to a box.

The puzzles are a mix of climbing and jumping challenges, with an emphasis on the use of the puzzle box companion.  Finding creative ways to implement these little boxes is the difference between survival and bloody death.  With treacherous jumps and steep ledges, death is almost certain, but the game allows you to quickly get back into the action and has frequent checkpoints.

The creative challenge of the puzzles is very deep, but overall Attractio can drag due to the tasks always being to climb, jump, or maybe fall for some distance.  The game does still reward you for quick bursts of play, another benefit of the vignette style.  This allows the game to be played for a short period of time, but still progress at a good pace.

Attractio can also suffer from bad lighting and camera placement, and combined with an overall clunky movement mechanic, this can cause some frustrating scenarios.  The graphics overall are pretty ugly and non-interesting, and the game has a host that plays like a mix of Max Headroom and that foppish TV host from the Hunger Games.

Attractio is a puzzle platformer that has a slight portal reminiscence and provides a bleak outlook for both humankind and Earth, but a pretty sweet vision of bloodsport entertainment casting off all ironic shackles. Fun, quick paced, but a little clumsy, Attractio is passable and provides a fun and unique alternative to a shooter.

Patrick Rost has been with Gaming Trend since 2013. At first focused on sports coverage, Patrick has gone on to cover a wide range of games and other products for the website. Outside of Gaming Trend, Patrick writes and records music, grinds perpetually in Elder Scrolls Online (PS4), and lives day to day with his two dogs, Bob and Stella.
Related Articles: Attractio
Share
Tweet
Share
Submit