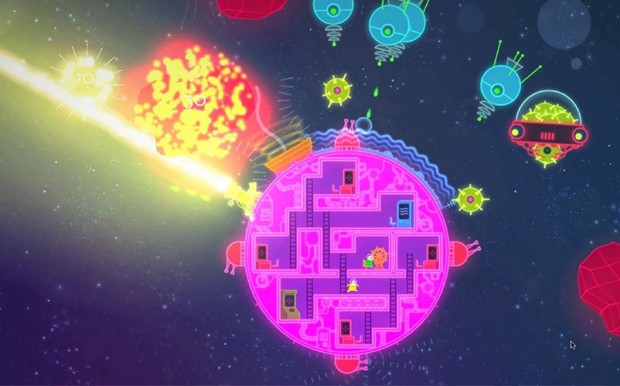 Looking at its well-deserved success, it’s unlikely many fans of Lovers in a Dangerous Spacetime would believe it was once described as very nearly an accident by at least one of its developers. (Unless you count Portal, in which case you might actually scour the gaming world looking for titles which have the words ‘whoops’ somewhere in the development notes.) But lo and behold it has been, and may serve as yet another exemplar to all the world’s creative screw-ups that great fortune may lay within the gaping jowls of flawed determination.

So now we look to see if the Playstation 4 edition of Lovers in a Dangerous Spacetime further solidifies this title’s place amongst other fantastically beneficial accidents, such as post-it notes, the Slinky, and penicillin!

(Spoiler Warning: It does!)

So a quick recap of the premise of Lovers in a Dangerous Spacetime:

The story is about a futuristic world where the population has literally captured the power of love as a source of energy and unification, spreading peace and prosperity across the galaxy. However an accident with the primary source of this power rips a hole in space-time, allowing the malevolent forces of anti-love to enter our hero’s world and start reigning havoc on the population.

As a member(s) of the Lovers, a spacefaring organization dedicated to maintaining peace and order, you and your partner (of either the bipedal, player-controlled type or the furry, AI-controlled type) must race to your ship, save the citizens of the cosmos, and push back the evil forces of anti-love!

That about does it for the story, and that’s not a bad thing. Lovers in a Dangerous Spacetime is all about the meta, the gameplay of the experience, and it delivers on that in spades. (See here in Sarah’s review of the original release.) Once you have your narrative set-up, you’re immediately plunged into the colorful, action-packed, and hilariously stressful world of the Lovers, which will make you wonder if god shorted you on the number of fingers you’ll need to face every challenge.

The controls are simple, responsive, and perfectly calibrated, so it’s not a question of how the game literally plays.As gamers already venerated with this title will tell you, Lovers’ challenge is about priority management first, then closely followed by the coordination of your efforts. It’s about how you play it, who is doing what, and are they doing it in a way that’s going to get you killed?

You and your partner, who is either a friend playing with you (co-op) or a semi AI-controlled Pet (single player) which is sort of controlled by you are flying in a ship which is comprised of several rooms. Each room has a panel which controls one of the ship’s functions, and it must be actively manned for that function to do its thing.

All of these functions must act in concert for your craft to be effective, which means at any given moment, even during the titles’ easier, early stages, there is just a bunch of things to do. All of these tasks are simple enough once you start doing them, but never quite enough on their own to guarantee survival.

So there you and your partner go, running around your vessel doing whatever needs to be done while it needs doing, and trying not to get in each other’s way.

The need for polished cooperative efforts or super-human multi-tasking capabilities in this game are so profound, that it heightens the sense of victory and defeat to levels few other titles can touch. As you are swarmed by enemies, set-upon by space monsters, and pummeled by drifting asteroids, you’ll rarely find your mind focusing on how dangerous your opponents are or what you’re doing to stop them. No, instead you’ll often find yourself wondering, doubting, praising, hoping, praying, cursing, and checking in with what they, your “partner”, is accomplishing. Lovers in a Dangerous Spacetime’s unrelenting stress test of teamwork is part of its widely celebrated charm, even if the charm has led it a few damaged relationships and shattered controllers around the world.

Getting right down to how the PS4 receives that experience, I couldn’t find a snag, hiccup, or flaw in sight. The game appeared to play, feel, and deliver exactly as I expected it to. PlayStation 4 has been executing excellent couch co-op ports since it launched, and Lovers is no exception. It may seem like a small hurdle considering the game’s low requirements versus the consoles power, but it’s often that assumption that leads to bad transitions that hurts a game’s identity for a whole gaming population.

The Playstation 4 version of Lovers in a Dangerous Spacetime lives up to all the accolades the earlier editions earned it, and will happily bring the same joy and frustration and a combination of the two to Sony lovers just in time for valentine’s. For those of us who’ve experienced love in their lives, I trust you can see the irony in that.

The Playstation 4 version of Lovers in a Dangerous Spacetime lives up to all the thrills and expectations set by the other editions. None of the potential stumbling blocks of should-be-easy ports are observed and fans of the original should find themselves right at home. The only limitations this game contains are whatever it’s inherited from original release, which is more of a matter of taste than actual quality. Gamers looking for an excruciating solo challenge or a relationship-testing co-op title, look no further.

I've been a huge fan and critic of games and movies ever since I had a voice to speak about them. I love power and influence of great storytelling, interactive and otherwise, and now want to be more than just a consumer. My biggest strength in this regard? Almost every time, I'm fair all the time.
Related Articles: Lovers in a Dangerous Spacetime
Share
Tweet
Share
Submit