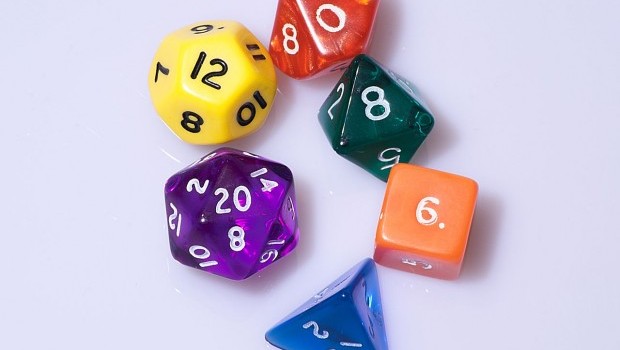 There is no such thing as a “Purist” when it comes to dice. One may claim that applying arbitrary randomization to games of skill is worse than a gimmick and mitigates experience or strategy in the favor of the uninitiated. Others will insist that by its very nature a game involves elements the players cannot control. Call it chance or luck, Karma or Providence, the opportunity for unpredictability is what keeps people playing, and dice offer a simple way of creating that element.

Chances are, where any individual gamer falls on this debate likely has to do with one’s perceived aggregate success or failure over the years throwing dice. I can remember getting slaughtered by dice rolls many times playing HeroScape; I’ve been the victim of the equivalent of “Heads” on 11 of 12 coin flips. HeroScapers know what I mean. But I also vividly recall the time more than 25 years ago when my lone army in Alaska completely destroyed my Dad’s stack of I’s and III’s invading from Kamchatka on the Risk board. The odds against such events are long, but that’s why they are memorable. Both the victor and victim get to keep that memory for life, recounting the desperate circumstances for geeks of all merit.

[singlepic id=11390 w=320 h=240 float=left]I suggest that how dice are applied in a game is the ultimate factor. Risk and HeroScape could not be more different in how they employ dice to prosecute combat and advance in the game. Over the course of a game of Risk each player will make dozens of dice rolls. It’s inevitable that unlikely results occur, and that extremely unlikely results happen once in a while. That’s most of the fun in the game; that at any time you can make a stand and turn the tide. By sheer volume the dice-rolling evens out, which places emphasis on strategy. Experienced Risk players do not place all their armies in Ukraine and expose themselves to several fronts. A Europe or Asia-focused strategy can work, but it’s going to be a hard road, and you’re likely going to need some help from the dice gods. Risk has been around a long time, and it continues to be a great game because the dice mechanic, while simple and engaging, is secondary to success behind sound strategy.

HeroScape, by contrast, is more about dice-rolling success. Sure, there is an art to drafting and mobilizing armies, but when the boots are on the board the factor that decides more games than any other is players’ ability to roll skulls and shields. I have been embarrassed by runs of good dice rolling vs bad while playing against experienced HeroScapers who should have wiped me off the map. I’ve taken down Major Q9 at height advantage with a squad of Rats, and destroyed an entire 500 point army with just the Hulk. But I’ve also had my Deathwalker 8000 shot off a mountain by Johnny “Shotgun” Sullivan and watched helplessly as Stingers and Gladiators chewed through a pair of dragons and my Kaemon Awa. As much as I love the idea of HeroScape, I loathe that dice can be feast or famine. There’s too much setup, consideration and money (!) that goes into every game of HeroScape for it to routinely play so poorly. It begs the question: what would a game like this play like if there were no dice?

[singlepic id=11389 w=320 h=240 float=right]We’ve all played games where it feels like the designers did not want to put the effort into a clever and novel solution. The good news is that in the past fifteen years several great games have come out which use no dice at all. Remember Diplomacy? Try Game of Thrones. No dice but plenty of excitement. I recently played the 2nd Edition with 5 friends and it was the most stressful and rewarding board gaming experience in my entire life. I was emotionally and mentally exhausted by the time we finished, and I loved almost every minute of our five-hour session. And doesn’t it make perfect sense that war games should be more Diplomacy and less Risk? Dice and scale don’t mix. Why rely on chance when I can invest in recruiting, training, moving and supporting a more potent force than my enemy?

It’s becoming more commonplace for games to utilize cards in place of dice to create the dynamic element. Games like Arkham Horror use hundreds of cards to create variation. And why not? A well-crafted card gives a player something of value while at the same time providing intriguing game context. Cards are treasure, and who doesn’t like treasure? Arkham has dice too, but rolling D6 is the least important aspect of the game. Puerto Rico, Thurn and Taxis, and the beautiful but extremely difficult Lord of the Rings by Reiner Knizia are only a few of the many compelling board games now available that do not use dice at all, and are better for it. In today’s market the emphasis is on elegant gameplay and robust decision making. It is more fun to collaborate and negotiate with your playing companions than it is to silently push chunks of plastic at one another and then let a fistful of dice determine who wins and who loses.

Dice can still be useful, but with creative game designers challenging consumers to think outside the box, the odds your game night will be ruined by a run of bad luck are getting longer all the time.