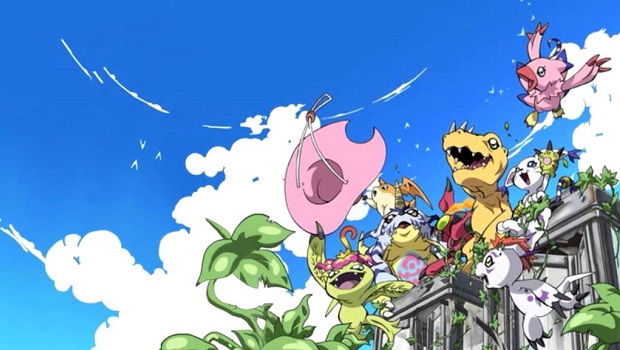 If you were to look through a box of my childhood toys, you’d be sure to find several old collectibles from a lot of the mid-90s to early 2000’s anime that were popular at the time. Along with Dragon Ball and Yu-Gi-Oh, you’d mostly find toys from the two big “monster taming” franchises of the era: Pokemon and Digimon.

When I was growing up, Pokemon and Digimon were probably the most central to my elementary school days. My interest in the two fluctuated as years went on, and as I grew older I eventually settled on the common consensus that Pokemon was the superior franchise. After all, Pokemon had maintained its cultural phenomenon status over the years, even against all the naysaying I remembered about it being a “fad” that would die out after its first few years.

As I’ve grown up and the room in my home for toys has shrunk, I’ve still kept a few for my shelves, but their use has shifted from playing with them to using them as decorations, and look upon them with occasional nostalgia for my younger years. But I recently realized that almost nothing I had of Digimon is on display at the time, which has since changed as I went digging through some old boxes to fill some empty shelf space.

Two of my favorite characters from back in the day: Guilmon and his partner Takato.

This realization was brought about by the North American release of Digimon Story: Cyber Sleuth (which I reviewed for Gaming Trend). Seeing the game on our review schedule for February brought on a wave of long-dormant love for the franchise, one that resulted in me watching the entirety of the show’s third season called Digimon Tamers, the one that starred my favorite Digimon: Guilmon. I started the show on Netflix expecting to be constantly cringing at dated acting and a childish story I would have outgrown 14 years after the fact. But much to my delight, I found neither of those things to be true.

Even as someone who is ostensibly an adult with more developed tastes than my elementary school self, I found Tamers to be something with actual nuance around the digital monsters beating each other up. These kids are facing real problems of mourning and mental health, debating the validity of artificial intelligence, rebelling against a corrupt government, and ultimately having to face great sacrifice for the greater good.

As my Cyber Sleuth-induced excitement continued on, I finally managed to watch Digimon Adventure tri., the ongoing movie series that follows the group of kids from the original series. These films (which have been arbitrarily divided into episodes on Hulu and CrunchyRoll) have the original eight children in high school, having to confront young adult issues. Joe’s worried about not making it into the colleges he wants to, Tai has no idea what he wants to do with his life as he nears graduation, and Matt has grown weary of the childlike lack of initiative he’s seeing from the group as Digimon are attacking the real world.

Digimon Adventure tri. is still in its early days, but already it shows that Digimon is capable of growing up.

Several of these situations I saw in tri. were ones I figured would go over the heads of the supposed target demographic of children. Or at least that was what I’d felt programmed to assume Digimon was for.

Cyber Sleuth finally launched earlier this month, and I immediately started digging into the RPG, finding my favorite Digimon and going on our latest digital adventure. However, Cyber Sleuth’s tone, setting, and even its content were something I found more reminiscent of the Persona series than anything I’d experienced in Digimon before. The story is actually presented as a mystery, one that unravels as the player, a digital detective of sorts, is investigating a conspiring corporation, working to undermine digital gang activity, and entering relationships that feel markedly more mature and dramatic than past games in the franchise, and with people with depth and personal drive that I wasn’t expecting.

The reason that Digimon is able to tackle these more mature themes in Cyber Sleuth is that the game isn’t about children; it’s about young adults. These people aren’t “the chosen ones” that are fulfilling a child’s power fantasy that they’re destined for great things, they’re grown men and women working with Digimon to accomplish tasks. The idea that Digimon and humans are working together as equals still remains, but these aged characters give Digimon a chance to grow thematically and tackle different stories that would’ve been implausible had the decision been made to cast the player as a child.

Cyber Sleuth is a more mature setting, with drama and humor more appropriate for a young adult audience.

Meanwhile, across the aisle, I’ve found myself growing more and more dissociated from Pokemon as years have gone by. Despite giving in to my compulsion to buy in to every single mainline entry of the series, my actual enjoyment of the franchise as a whole has been slowly but surely dissipating as I realized just how stagnant it’s become.

On the games side, every mainline Pokemon game is essentially a pallet swap of the same concept: Kid gets a grass, fire, or water type Pokemon, goes on a journey, stops an evil organization, and becomes a region’s champion. This formula is sustainable for Pokemon because it thrives on the promise of new Pokemon and a semi-regular reinvigoration of the series’ competitive scene.

Unfortunately, this also means that the animated series has quickly become stale as well, as it has become as formulaic as the games it spawned from. Ash Ketchum is somehow still ten-years-old and working to be the very best like no one ever was.

The more things change, the more they stay the same.

It’s because every game and animated series is a soft reset of the same concept that Pokemon is constantly in a state where it’s an acceptable entry point for anyone, including young children who never saw the episodes or played the games before.

In a way, Pokemon’s success has perhaps worked against its actual growth. In order for Pokemon to be sustainable as it has been, it has to constantly be leaving the door open for the youngest of fans to jump in. It’s why Ash is still a child fighting the same battles, and it’s why every Pokemon game starts and ends the same way.

However, Digimon’s popularity has fallen from its peak, and made the series more niche than its arch-rival. As such, it really raises the question of what new games like Cyber Sleuth and new animated series like tri. are really for. They’re clearly not written for kids who were the same age as I was when I first became obsessed with the series in elementary school, but feel as if they’re for those same people who have grown to have adult relationships and adult struggles, like the series has been knowingly growing alongside its original fan base rather than catering to the same age group over a decade later.

As removed as we are from the original rivalry of Digimon and Pokemon now, it’s clear to see that Pokemon won out in the end. The series has maintained a presence in the public eye, where a lot of children would unlikely be able to identify Guilmon or Agumon if I showed them one of my old Digimon toys. The Pokemon video games are the second-highest-selling video game series of all-time, while several Digimon games are not even localized for territories outside of Japan. And overall there’s a universal sense that Pokemon is part of the games industry’s culture, where I can’t name many of my friends and colleagues who have particularly vivid memories of playing through Digimon games, and even to an extent watching the animated series.

But the franchise has still maintained a loyal fan base that dates back over the decades, and that’s why Digimon has been put in a position where it doesn’t have to aim for a younger audience as it did in the beginning. Now, it can be for those who were infatuated with the series in its prime as children and have since grown into adults looking for characters and stories with a depth that rivals other RPGs in the market, and is altogether absent from its competitor.

Digimon may never be able to replicate its old success, or ever rival the behemoth status that Pokemon has managed to maintain over the years, but with Cyber Sleuth and tri., I have hope that the series will still be holding my attention as an adult long after it entered my life as a child.