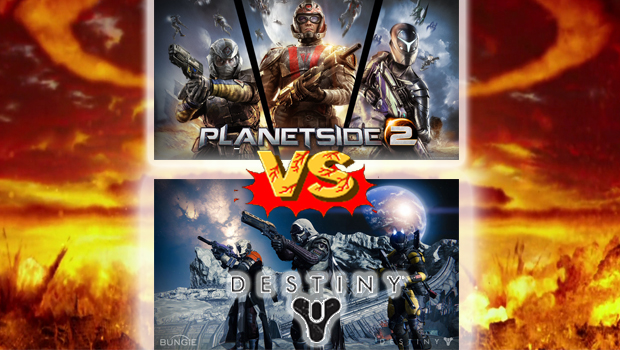 I try not to think about it much, but there was a brief period of my life not too long ago when I was deeply ingrained in playing Destiny. No joke, I lived and breathed daily strikes, weapon buffers and maxed-out exotic gear. Thankfully, those days are behind me, but recently I’ve found something else to occupy my time (hopefully not as much). PlanetSide 2 has finally been released on the PS4 console, and it has completely solidified my resolve to never look back at my grindy, engram-filled past. Here’s a list of five reasons why PlanetSide 2 is better than Destiny.

My digital copy of Destiny cost me $59.99 on the PlayStation Store. I was so addicted at first that, in my zeal, I made no hesitation before forking over the additional $35.00 to preorder the first two expansions bundle ($20.00 each separately). And while the upcoming September 15th expansion, titled “The Taken King,” promises to be more substantial than the first two expansions, it’s very difficult to justify spending the additional $40.00 asking price to continue playing the game. Perhaps the greatest praise for Destiny should go to its marketing team, as they’ve essentially sold a game that players originally thought they had purchased for $59.99 for a grand total price of $135.00. On the opposite end of the spectrum, we have PlanetSide 2, which is entirely free to play from the start and there are no required subscription fees to continue playing. True, you can pay your way through shortcuts and quick weapon purchases, but honestly, I’ve been having a blast since it came out and I haven’t spent a single dime. PlanetSide 2 is balanced in such a way that avoids the dreaded “pay-to-win” business model by not giving an unfair advantage to the players with the most cash. Most of what can be purchased, besides quicker access to guns and XP, are cosmetic customizations to vehicles and characters. With time and patience, every player has the same chance of gunning their way to the top, regardless of whether or not they’ve made any purchases.

Destiny may be marketed as a first person MMO, but the gameplay experience is more likened to Killzone or Halo than World of Warcraft. Rather than dropping you in a world that is open to free range exploration, Destiny is segmented by closed doors, dead ends and numerous load screens. The freedom of movement is one of the best things PlanetSide 2 has going for it. If you end up in a place you don’t like, you just hop in a jet and land somewhere else. There’s plenty of space for any player to find his own niche. The servers boast four sprawling continents, each with a digital size of 64 square kilometers! Sure, you can spend all day walking it, but you’ll probably want to spawn a vehicle or, better yet, warp to your destination. PlanetSide 2 really is a massive countryside that feels like an endless and vibrant expanse; by comparison, Destiny‘s stages come off feeling more like large shopping malls than open worlds.

The first time I played Destiny, I was blown away by how much fun it was. The graphics and the gameplay had me glued to the PS4 almost nonstop, huddled in front of the glow of the screen until the wee hours of the morning. However, the problem that I soon discovered was, once you complete the main story campaign, there’s little left to do but continually play the same levels over and over again. Sure you’ve got the raids if you can get a group together, and the Crucible if you’re good enough to not die every five seconds, but most of what you’ll be doing to upgrade your character will be the daily, weekly and nightfall strike missions that pull levels from the same roster as the campaign missions. Believe me, after hearing Dinklebot say “We’ve woken the Hive!” for the thousandth time, the unpredictability of PlanetSide 2’s gameplay feels like a breath of fresh air. Since the only enemies in PS2 are other human players, there are constantly surprises around every corner. You may think you have the enemy pinned down with your machine gun nest, but you never know if a cloaked infiltrator will sneak up behind you and knife you in the back. With the enormous sizes of the maps, the massive player count crammed into each server, and the varying strengths of both your team and opponents, no single game can possibly ever be the same as the last.

PlanetSide 2 is less of a time sink. Like I said, I played an embarrassingly large amount of hours of Destiny. I was there from the Beta up until the second and most recent expansion and I’ve since come to realize that if you want to hang with the top clans for the top raids (or be somewhat competitive in the Player Vs. Player Iron Banner matches), you’re going to need upgrades – lots and lots of upgrades. And these upgrades take time. The only way to achieve the highest level in the game is by having the best armor, and since all the best weapons and armor in the game are randomly dropped during the raids, you could be at it for a while. I’ve seen guys dutifully go through the same raid each week, three times (one for each character), and still come up short in getting their prefered weapon (Gjallarhorn) or armor of choice. Even after you have the item, you’ll need to upgrade it to the max, something that requires loads of resources (collected or rewarded through missions) and tons of experience points to pour into it. The worst part is, as soon as a new expansion comes out, the whole process is restarted as max levels are raised and new items are released. Long story short: if you want to keep up in Destiny, you’re going to need a lot of time, patience and luck. On the other hand, in PlanetSide 2 I was able to chip in and help out my team in a competitive manner right from the get-go. Anybody can man a Sunderer turret, or capture a zone; you may not be the fastest or strongest, but even a level one engineer can repair a tank and feel helpful in the grand scale war effort. Most of what counts is the ability of the player, rather than the upgrades of weapons or character. I never felt out of my league or outclassed when participating in a battle in PlanetSide 2, and it’s nice knowing I can jump in and help out my team even if I haven’t maxed out every upgrade.

Of course this last one is totally subjective, but why should that prevent me from including it? Now that I’m finally free of the shackles of Destiny, I am able to clearly look back at that time and realize just how little fun I was having. Playing Destiny became more like a chore or a job than a fun-filled gaming experience. Collecting strange coins and experience points every day was my meager pay out for slogging endlessly through the same repetitive levels fighting the same patterns of bots (times three if, like me, you build three classes at once). I ceaselessly toiled collecting resources and re-killing the same bosses as my eyes glazed over, and for what – so I can upgrade my Thorn pistol again after it became obsolete and I was forced to reset its stats following the release of the “House of Wolves” expansion?…Sigh…. In PlanetSide 2, the focus is on the experience of the battle and the success of your team. It’s war on a grand scale! I never knew how much fun I could have trying to protect a convoy route or sabotaging an enemy generator. I spent an hour last night defending a hallway with my friends online, repairing Max suits and dropping ammo, and it was infinitely more fun than killing Omnigul for the 100th time. In PlanetSide 2, my actions have meaning, no matter how small. Whenever I repair a turret with bullets zipping past my head, or break an enemy’s defenses with my tank, I feel as if I’m contributing towards an ongoing war effort on a grand scale; to me, that is more fun than grinding away at the same levels over and over in order to max out guns and characters. So if you’re looking for a way out of the Destiny grind, you’ll have a hard time finding anything more fun than PlanetSide 2, at least until the next cool thing comes out… when’s the release date for Star Wars: Battlefront, again?