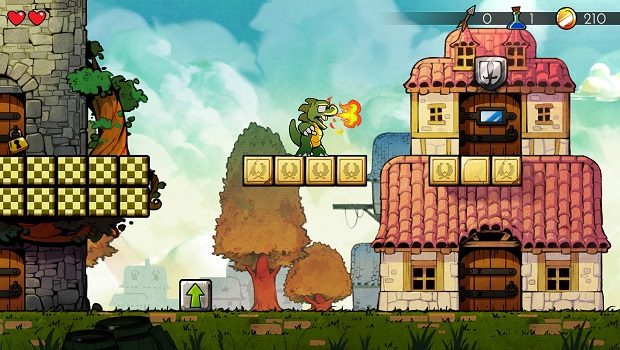 A hero grasping his sword and shield, storming a castle to battle a dragon. A scenario that many gamers should know well, and one of the first images that comes to mind when reflecting on the era of early console gaming, this is the position I found myself in upon booting up Wonder Boy: The Dragon’s Trap. A lovingly crafted remaster of a 1989 cult classic, this title absolutely oozes nostalgia from that era of action platformers…for better or worse.

My time with Wonder Boy was filled with both appreciation for the effort put forth to bring the title into the 21st century and frustration at how much of a product of its time the game is. The remastering effort and gameplay mechanics are a mixed bag, and that leads to the product as a whole coming across as merely average, with a wealth of unrealized potential.

I’d never even heard of the Wonder Boy series before I was tasked to review this remaster, so I had to do a bit of digging to learn about its origins. Originally known as Wonder Boy 3: The Dragon’s Trap, the Sega Master System title was developed and released by Westone in 1989. Partnering with Ryuichi Nishizawa (one of the original Westone developers) to help bring the game to life, and working with DotEmu to license the IP, Lizardcube has put their heart and soul into remastering this cult classic, and it definitely shows.

The animation and art style has been beautifully updated with lovely hand-drawn animations and backgrounds, and the score has been recreated with live, orchestral recreations of the original chiptunes. I was completely taken with the animation, and I fell in love with the soundtrack.

Their love for the source material doesn’t simply lie with the remaster, however; one of the most enjoyable features of the game is the retro feature. With the push of a button, the player can choose between the modern look and sounds of the remaster and the original 1989 graphics and soundtrack — even in the middle of gameplay. This is an absolute treat for those who played the original release, and even though it was well before my time, I couldn’t help but smile at this wonderful love letter to the original IP.

That being said, I did have a minor gripe with the soundtrack — it eventually became repetitive. The tunes are all charming but short, and one or two of the tracks were definitely worn out by the time I’d finished the game. However, that doesn’t stop me from loving the soundtrack; I particularly enjoyed that the dungeon theme was remixed to fit each dungeon’s aesthetic, be it a pyramid or Japanese temple.

While the effort put into updating the graphics and general feel of the game for an HD remake was certainly admirable, the gameplay unfortunately still feels like it’s stuck in the past. The main schtick of the game is how Wonder Boy undergoes transformations into different anthropomorphic animal creatures, all with different abilities. The game begins with Wonder Boy fighting his way through a castle to fight the Mecha Dragon — fairly standard classic gaming fare. This changes upon defeating the dragon, however; the beast’s dying spirit curses Wonder Boy, transforming him into Lizard-Man and knocking his health down from six hearts to one.

From here, the player is dropped into a large, non-linear world without much by way of direction. I commend the game for giving the player the freedom to explore, but the difficulty of the early game is brutal. I enjoy a healthy challenge in a game, don’t get me wrong. However, the difficulty should come from interesting and challenging enemy placement and level design; unfortunately, the source of challenge comes from Lizard-Man’s poor combat abilities and miniscule health pool. Your projectile attack is pitiful, and defense is almost non-existent. Purchasing new weapons, shields and armor from shops helps mitigate this, but enemies don’t drop nearly enough money for how outrageously priced everything is. I had wanted to collect every item in the game, but the amount of time I would have to spend grinding money drops from enemies in order to purchase items that were worse than what I already had was absolutely not worth the effort.

After defeating the second boss, Mummy Dragon (as an aside, I do love the naming conventions and themes of the game; its sense of humor is quite enjoyable), Wonder Boy again transforms, this time into Mouse-Man. While his attack power and defense are better than Lizard-Man’s, his attack is laughably short ranged. The main purpose of Mouse-Man comes from his ability to cling to certain walls and ceilings, allowing the player to explore more areas. This is how you’ll be progressing through the game — finding a new transformation to explore the next area, defeat the next boss, and acquire the next transformation.This is akin to collecting Super Missiles or the Wave Beam in Super Metroid to progress to a new area, but the point where the two diverge is that with the latter, you can switch between abilities anywhere at will. With Wonder Boy, you aren’t able to switch between your various transformations until about two-thirds of the way through the game, and even once you’re able to, you can’t choose from a menu or button command; you have to go to a certain hidden room in the game, cycle through the transformations until you reach the one you need (with quite a long and cumbersome animation in between), and then return to the area that you intend to explore next.

The progression system is also very archaic. Upon death, you are returned to the village hub area — even if you died to the boss at the end of a dungeon. Even worse, when you die there’s only a very slight chance that you’ll receive a potion (which acts the same as a fairy in Zelda — restoring life when all of your health is depleted), meaning that the trek back to where you were will most likely be even more difficult this time around. You can buy potions, but only one shop in a very remote corner of the world sells them, and you can only hold three at a time. Not only that, but every time you discover a health upgrade, the cost per potion goes up — eventually becoming more expensive than some of the weapon upgrades. All of your ranged attacks are tied to item drops from enemies, and when you die, any that you may have had are also lost — the 18 fireballs I had been saving for the next boss fight went up in smoke, with no chance of recovery.

The gameplay itself is bearable but not excellent. The controls are serviceable, but nowhere near as tight and responsive as something like Shovel Knight or Mario. The damage knockback and invincibility are irksome to an almost absurd degree — when you take damage, you’re knocked back and gain invincibility most similar to Mega Man; however, if you’re hit again while the invincibility is still active, you won’t take damage but will be knocked back again, and the invincibility period resets. This lead to some incredibly frustrating situations where I was being comboed by attacks for an agonizingly long time, even though I wasn’t taking any damage — for one of the boss fights, I even timed how long I was helpless for due to the path of the boss’ movements and attacks. It ended up just shy of two minutes. Two. Minutes. That’s inexcusable. I know that I’m not the best at video games, but when I’m forced to be be carried upwards by a dragon’s fire breath without any way to escape, that’s when it’s easy to discern that it’s a clear design flaw.

While I don’t regret the time that I spent with Wonder Boy, and I appreciate the effort that went into bringing this classic game to a new generation of gamers, the outdated mechanics and frustrating gameplay led it to be little more than a distraction for me. I loved the retro feature, but it would’ve been so much more intriguing if it had actually played a part in the gameplay, like having to switch between modes to solve puzzles or find secrets. I think that if as much care had been put into updating the gameplay and providing quality-of-life enhancements as was put into remastering the graphics and sound, then this title would’ve been a fantastic addition to gamer’s libraries. As it stands, fans of the original will greatly enjoy this remaster, but it’ll be hard for newcomers to connect and invest. I don’t think I’ll be returning to Wonder Boy, especially when I have something like Shovel Knight to scratch that classic 2-D platformer itch, but I am tentatively hopeful to see what Lizardcube brings to the table in the future, because the potential for greatness is absolutely present.

Though the graphics and soundtrack showcase the superb effort to update the original game for hardcore series fans, frustrating gameplay mechanics and archaic design keep Wonder Boy: The Dragon’s Trap from rising above anything but average.

Noah McGuire is a senior at the University of Michigan - Dearborn, currently studying Journalism and Screen Studies, with a minor in Game Design. His earliest memories of gaming com from the family sitting around the TV watching his father play Donkey Kong 64, and he one days hopes to be a part of making games that provide more people with those fond memories. An avid Legend of Zelda, Overwatch, and Dark Souls fanatic, along with enjoying weekly sessions of Dungeons and Dragons and the occasional game of Twilight Imperium, he'll always shoot straight on his opinions -- even if it'll land a bullseye on the "incredibly blunt" target.
Related Articles: Wonder Boy: The Dragon's Trap
Share
Tweet
Share
Submit