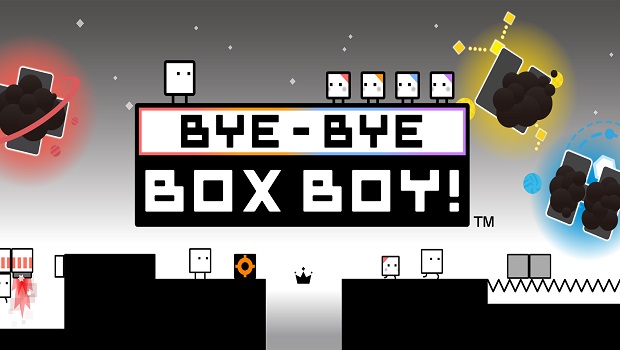 If you told me two years ago that a game featuring a sentient box would be one of the best puzzle series on the 3DS, I’d probably think you would be crazy. However, since 2015 the HAL Laboratory developed BoxBoy! series have contained some of the most consistently surprising puzzle games with its no-frills presentation and solid mechanics, with the first two titles receiving a lot of praise. This year brings the franchise to a close with Bye-Bye BoxBoy!, a fitting end to a trilogy of sleeper hits, and with it some new features that spice up the series.

We’re going on a trip in our favorite rocket ship!

While not the deepest story around, Bye-Bye BoxBoy! revolves around Qbby and his friends as they come face-to-face with a mysterious force that threatens various planets. Through eighteen different worlds across four planets, you control the box as he uses his powers of creation to save the day. Oddly enough, it’s a serviceable narrative for a lighthearted game, and the end may make you feel a little sad that, yes, this might be the final game in this series.
Qbby’s main power is the ability to create 1×1 boxes at will. While holding down the Y button, he can chain together boxes to create steps, use them to slide into crevices and ledges, or even shields to avoid obstacles like lasers and spikes. The maximum amount of boxes Qbby can create is denoted on the bottom 3DS screen in each level. Qbby can only create one stack of blocks at a time; if he tries to make another group of blocks, the previous one disappears. With this knowledge, you need to maneuver him out of harm’s way by creatively using boxes as well as running and jumping across levels. Additionally, there are hidden crowns scattered across each level with a separate block limit in place; if you create too many blocks, you’ll be disqualified from grabbing these crowns. However, they’re placed in hard-to-reach places, so you’ll need to think of alternate routes and different ways to conserve your blocks for these extra challenges. Completing a level will award you coins that you can spend on different items within the in-game shop, and grabbing all crowns from a level will give you more coins.

Not all heroes wear capes.
Well, some do.

Each world on average contains five to seven levels that revolves around a new mechanic. Every world has an inventive new move to use Qbby’s box ability as well as other environmental hazards, like anti-gravity fields and underwater segments. While a lot of the earlier worlds are straightforward in their tasks, some of the later ones can be downright devious at times. Thankfully, there is a hint system that uses 3DS play coins in order to flash the shape of the box structure Qbby needs to create in order to advance. The system has been a staple ever since the first game, and it’s a very balanced one that usually steers you in the right direction.
While most of the worlds build upon the mechanics introduced in the first two games, Bye-Bye BoxBoy! has two additional features: Qbaby levels and other box types. In the former, a few worlds (one for the first three planets) have little adorable Qbaby boxes which you’ll escort to the exit of each stage of that world. While they can run and jump much like Qbby, they are prone to get stuck easily, so you’ll have to carve a path for them in order to advance. While these levels could have fallen prey to the dreaded escort mission trope, they’re surprisingly well done, as the AI for the Qbabies is adequate, and for the most part they won’t dive headfirst into a bottomless hole or pit of spikes.

New to the series are themed blocks that Qbby can create at will. These blocks have different effects, such as a bomb block that can clear out obstacles, a warp block that can teleport you, and a remote block that you can control freely. Each of these four blocks are the highlight of the game, and these mechanics add a complex layer to an already comprehensive title. These new worlds feel different from the rest of the game (they even include accents of different colors, something that is starkly different from the series’ trademark monochrome), and I enjoyed my time playing these levels.
However, while I did enjoy these two new types of levels, the potential to exploit them further is wasted. In fact, this is possibly the biggest shortcoming of Bye-Bye BoxBoy! Each of these gimmicks lasts one regular world, which is arguably too short (especially since the mechanics don’t show up again until late-game and post-game levels). Extending worlds with newer mechanics to about twice their size would have been preferable, as it would have given the game more room to breathe and show its tricks. As it stands, it feels like sometimes the game is a jack of all trades, master of none with level quantity.

They said I could be anything, so I became a box.

However, what makes the whole game work is how smooth and responsive the experience feels. Whereas BoxBoxBoy! seemed to ramp up in difficulty very quickly, the difficulty curve here feels a bit more relaxed like the original BoxBoy! You won’t feel frustratingly challenged until the endgame, and the puzzles thrown at you are fair and easily solvable with just a few minutes of brainstorming ideas. The box creation technique is simple to execute, yet takes time to master some of the trickier formations. Its minimalistic presentation means it doesn’t have to impress with its visuals, and instead lets the puzzles to the talking. Many of the solutions feel logically sound, and with each completed level I felt like I had accomplished something great, and I was raring to go for another round.
Something that did need some work was the soundtrack; while it does contribute to the minimalist vibe of the game, a lot of it feels recycled from the previous titles. As such, the game sounds adequate, but unremarkable. I couldn’t really tell you anything special about the songs in the background, and it ends up becoming a familiar drone that you’ll get used to in time.
The amount of unlockables is pretty impressive for a small eShop game of this scale. While the main campaign lasts roughly five to six hours, there are a lot of things to do within the game’s hub world. The aforementioned coins will allow you to purchase costumes and other items for Qbby. In addition, you can wear older costumes from the previous two games if you unlocked them in their respective titles, and having save data from both games will unlock a Qucy costume (which is helpful since it grants hints for free and no crown block limits).

As this is a HAL Laboratory title, you can also link up Kirby series Amiibo figures to unlock colorful costumes for Qbby. While a bit out of place (since the bright colors clash oddly with the faded monochrome), it’s a nice touch if you already have these figures. Additionally, there are some bonus worlds that are unlocked after completion of the main game, as well as challenge worlds that will pit you against some tricky conditions (such as not being able to fall too far or restricting the ability to jump). These sadistic challenges will please series veterans and puzzle junkies, and also combine mechanics together for some truly difficult experiences.

Bye-Bye Box Boy! is a fitting farewell to a beloved sleeper hit. Its minimalist charm and some great puzzle mechanics grant a feeling of excitement for which all puzzle games should strive. I would love to see Qbby star on the Switch, but until then, this game marks the end of an amazing series.

Elisha Deogracias is an aspiring accountant by day, freelance writer by night. Before writing for Gaming Trend, he had a small gig on the now defunct Examiner. When not being a third wheel with his best friends on dates or yearning for some closure on Pushing Daisies, he's busy catching up on shonen manga and wacky rhythm games. Mains R.O.B. in Smash. Still doesn't know if he's a kid or a squid.
Related Articles: BYE-BYE BOXBOY
Share
Tweet
Share
Submit