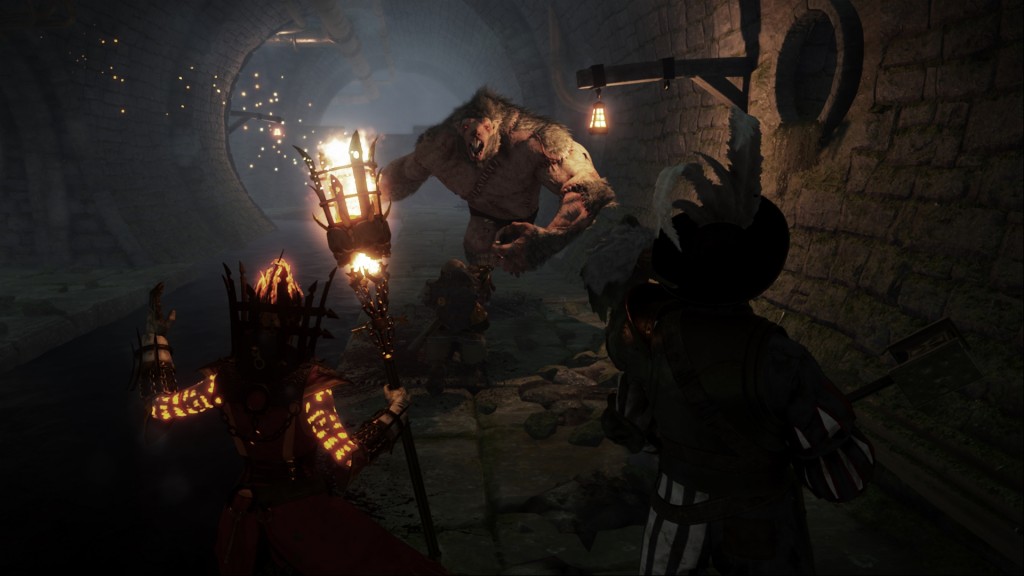 Warhammer: End Times – Vermintide by Fatshark is what you get when you take the swarming menace meatgrinder experience of Left 4 Dead, match it with the unlock, loot and progression system of Payday 2, and throw the whole thing into the dark fantasy Warhammer world of swords, black powder pistols, and magic. Do you like the idea of joining up to three of your friends online while the lot of you fight off wave after wave of filthy, disgusting rat-creatures? How about being rewarded for your successful efforts with chances at increasingly powerful pieces of loot for five distinct classes? Did I mention that these are Skaven, not zombies, so your own friend who always whines about how they’re sick of zombies won’t be able to complain much this time around? Come on and read about this one, it’s fantastic.

Warhammer: End Times – Vermintide (hereafter just Vermintide) takes place in the gritty, death-laden world of Warhammer. Notice the lack of 40k there – this isn’t Games Workshop’s epic setting of sci-fi Space Marines. Instead, it’s Games Workshop’s epic setting of low fantasy. Swords instead of chainblades! Magic instead of psychic power! Dwarves and elves and skaven, oh God the skaven. Put simply, this game is up to the throat with cobblestone paths through burning villages alongside deadly-looking docks and… you get the picture. It’s a dank, depressing, oppressive-feeling world, and a massive army of Skaven have decided to claw their way to the surface and make the whole thing even worse. Your task is to pick up a blade and repeatedly stab it into these creatures, so as to encourage them to screw off back to their warrens.

You too can grow this large with exercise, a healthy diet, and snorting huge piles of powdered warpstone.

Well, not just a blade. You’ve got quite an arsenal at your selection here, grasped in the hands of one of five different characters. You’ve got your uptight, sneering Witch Hunter who’d probably be playing a villain in any other game. You’ve got the mercenary in his employ – a more stalwart and noble sort, who was previously hired on to help contain a dangerous fire-spewing mage. That mage is also a playable character, swapped from prisoner to compatriot due to the surprise appearance of the aforementioned rat-beast horde. Rounding out the list is the bow-wielding elf and the axe-swinging dwarf, doing their best to fit their fantasy stereotypes as they are contractually obligated to do so. They’re all visually unique, have distinct personalities, and engage in spontaneous mid-game chatter to keep the bloodshed entertaining.

The five characters all have their own sets of weapons too, a melee tool and a ranged option each. These further subdivide into more distinct pieces of equipment, allowing some meaningful customization – do you want something fast and light to stick and move, or something weighty that’s slow but will clear a half a room when you swing it? Do you want your ranged weapon to react fast to pick off stragglers, or are you looking more for sniping headshots? Some of the gear feels same-y – you can only stab and chop so many ways – but the characters still manage to feel distinct. The flame mage in particular stands out as unique, ditching the need for ammunition for the requirement of having to spend time releasing their built-up energy, so as not to explode in a torrent of flame and crispy wizard parts.

Of course, even a diverse amount of loot doesn’t mean much if there’s nothing to do with it. Vermintide provides 13 levels of gameplay, each with 5 levels of difficulty and a ‘dynamic spawn system’. The latter means that swarms of the furry little creeps can suddenly show up to charge you at any given time. The environments are beautiful, insofar as depressing, claustrophobic environments can be beautiful, and the enemies are enticingly distinct from the zombie-norm. Above and beyond the mere ornery muppet with a stick, you’ve got ‘special’ skaven who fire their ‘ratling gun’ at your allies, another who hurls a cloud of gas that can choke allies and enemy alike, and even a rat ogre who can show up, wreak havoc, and take tons of effort to kill. If this sounds familiar to you, it should: a good chunk of these special enemies are pulled straight out of Left 4 Dead. In fact, between the enemies, the find-a-rare-medic-pack no-regen healing system and the sparseness of ammo, it’s easy to make the mistake of thinking Vermintide is just Left 4 Dead with rats.

A glorious environment. Yet it has more rats than an abandoned Pizza Hut.

Don’t make that mistake. Vermintide sets itself apart not only in terms of honest-to-God distinct weapon mechanics and the loot system, but also in terms of combat as well. Fatshark has experience with melee-based games, having previously worked on War of the Vikings, and that emphasis on up close and personal combat is emphasized in this title. I’m not talking about simple desperation-mode use of melee once ammo runs dry: there’s a blocking and stamina system in this game, encouraging the player to draw back and take a few hits while backing off and looking for a better opportunity to engage. Blocking also allows you to exert some stamina to shove your enemies, buying some breathing space for your allies (or, at times, just plain knocking some skaven off a cliff.) As you play, you’ll find yourself naturally switching between ranged weapons to take off chargers, then falling back to swords, shields, daggers and more for a sustained conflict. If you plan on tackling the harder levels, you’ll also learn how to block and dodge well if you plan on surviving – and you’ll want to do that, since that plays into the loot system.

All of the weapons in Vermintide come in normal, uncommon, rare and exotic forms – also known as white, green, blue and orange – and pick up an additional unlockable passive buff for every level up from ‘white’. While you can get some boring normal gear just from leveling up, the real eye-catching toys are only available by successfully completing a mission, with harder missions (and optional side-quests, like picking up cursed grimoires and inventory-using tomes during gameplay) offering better loot and experience. Loot is awarded only at the end of a successfully completed mission, and there’s a chance aspect in play: dice are rolled, with symbol-up results resulting in better and better loot. Doing the aforementioned optional side-missions during the game can result in improved dice – with 1 in 6 odds of a symbol being boosted to much higher – while higher levels of difficulty improve the range of loot. And if you end up with garbage loot? Fear not – it can either be broken down for components (used to unlock the abilities on actual nice pieces of loot), or combined in sets of 5 to yield a piece of loot the next tier up.

“Say cheese?” Good job, human, I haven’t heard that one a million times before.

So, taking stock, Vermintide offers an environment of the appropriate Warhammer grimdarkness, some class diversity, loot and thirteen levels of gameplay out of the box. Not bad for $25 bucks, retail price, on Steam – even for an online-only game. That alone would be enough to rate it a solid ‘Must have’ for anyone who enjoys co-op FPS combat. But what’s really enticing about Vermintide is the promise of what’s to come. Fatshark games has already talked heavily about their plans for the title, and how they hope to support it with yet more weapons, more enemies, more levels, and of course, DLC. This sort of thing, a developer promise, can be a risky thing to place a bet on – gamers have been burned in the past. But given Fatshark’s history with War of the Vikings and the quality of gameplay in Vermintide, I think it’s a reasonable bet that this is a title which will be sticking around for a while. Put another way: it’s a game you and your friends can invest yourselves in, building up your characters, learning tricks, and looking forward to fresh experiences. I’m a big fan of any developer who supports their title seriously after its initial launch, and with Fatshark, I feel like we’re going to see a whole lot more coming. I like that, and I think most people would too.

Warhammer: End Times – Vermintide is a fantastic experience that combines the best aspects of some of the most noteworthy titles in the co-op online FPS genre, and enhances it. If you’re into loot, multiplayer and piles upon piles of dead rats, grab this one off Steam for you and your friends. You won’t regret it.

The best parts of Payday 2 and Left 4 Dead in the gritty Warhammer fantasy universe, with a heavy emphasis on melee combat and loot. There's tons here for co-op fans, and the emphasis on melee makes it stand out from the rest of the pack.

Victor Grunn has been a gamer since the days of single-button joysticks and the Atari 800XL. When not lamenting the loss of the Ultima series or setting people on fire in Team Fortress 2, he's an aspiring indie game developer and freelance writer.
Related Articles: Warhammer: End Times - Vermintide
Share
Tweet
Share
Submit