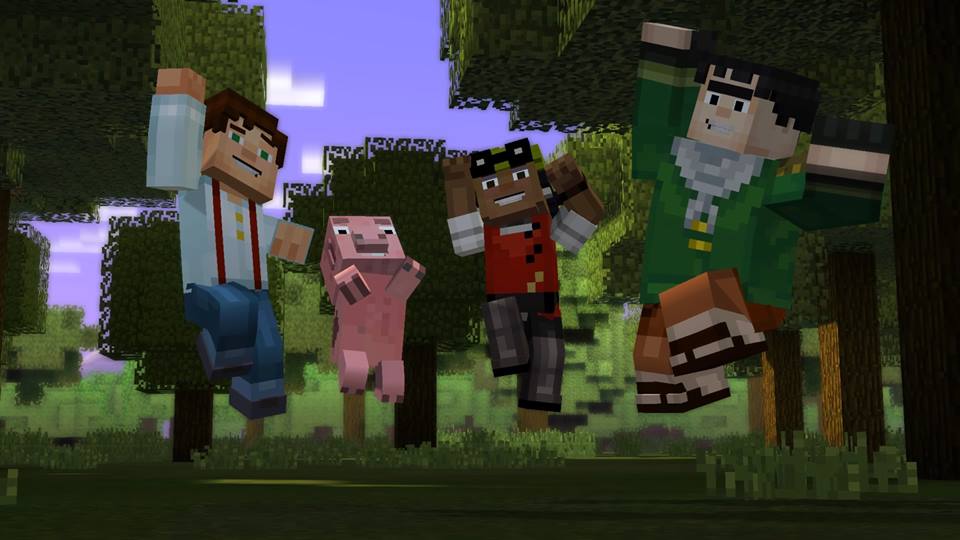 Minecraft: Story Mode is a testament to Telltale’s ability to mold other properties into its own formula, but for the first time in awhile, it feels like the sharp writing and intriguing characterization seen in games like Tales from the Borderlands and The Walking Dead is almost entirely absent from the studio’s latest adaptation. Story Mode is full of clever nods to the source material, but in Episode 1 – “The Order of the Stone,” Telltale didn’t manage to draw me into its own Minecraft story on its own merit.

In Story Mode, you play as Jesse, a character whose appearance and gender you can choose at the beginning of the game. Jesse, along with best friends Axel and Olivia, is entering a building contest in order to win the chance to meet one of their heroes who is part of the order that defeated Minecraft’s final boss the Ender Dragon. As the group is working to build a machine worthy of first prize, events go down that lead Jesse and company down a darker path, one riddled with faithful homages to Minecraft’s world.

While Telltale does a sincere job of using every piece of Minecraft lore at its disposal to tell a cohesive story, the weak link is that this story follows a cast of characters that is altogether unremarkable as their personalities feel stunted and underdeveloped. Story Mode comes off very much like a kids’ TV show that doesn’t take the extra step to appeal to adults. There are a few chuckles to be had between the most basic of character development, but there’s a distinct lack of endearing personalities among the cast, and it hurts much of the investment that Telltale has managed to nurture in past series.

Outside of the minimal character development, Story Mode is mostly your standard Telltale affair. You’ll explore environments, interacting with characters and your surroundings in order to progress, as well as pulling off quick-time events during action sequences. Telltale’s signature timed dialogue choices make a return, but “The Order of the Stone” did feel like it was severely lacking in big decisions outside of siding with characters during disputes. Story Mode does bring in some crafting elements to add some Minecraft flair to the formula, but they feel like cute references more than they factor into any sort of mechanics outside of the creation process.

The most notable addition to Story Mode is the inclusion of a strange sword-fighting minigame that basically feels like a game of chicken where the player has to time sword swings at just the right time to strike an enemy before they can attack first. This felt solid when I was fighting simple zombies, but became more frustrating as I had to utilize it for more elaborate scenarios, ones that the game’s unclear targeting system couldn’t keep up with.

The feeling that “The Order of the Stone” gave me was one of slight confusion, as I found myself constantly wondering just who Minecraft: Story Mode was for. The dialogue doesn’t have the same bite that Telltale is capable of, the characters aren’t as compelling as anything we’ve ever seen from the studio, and the choices never once made me stop to consider the options in front of me.

I find it troubling that I have such a hard time concisely summing up just what Minecraft: Story Mode is. I can easily call Tales from the Borderlands a comedy and Wolf Among Us a crime drama, but I’ve played through 20 percent of Minecraft: Story Mode and no such descriptor comes to mind. “The Order of the Stone” offers no answer to that question, and so far Minecraft: Story Mode just feels like Telltale cleverly filling in blanks.

Minecraft: Story Mode "The Order of the Stone"

The way that Telltale takes advantage of Minecraft lore to form its own narrative is intriguing and will delight fans of the original game, but what the studio is doing with this new story isn't doing much that will excite anyone else.