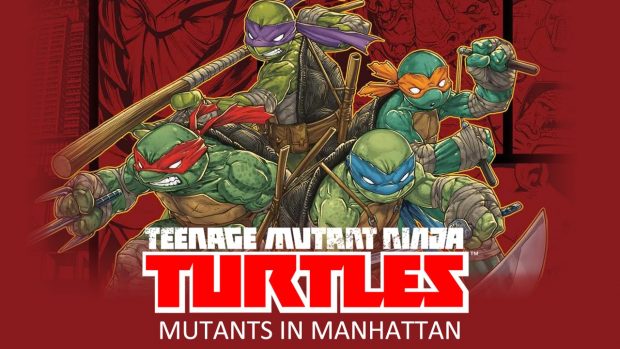 Teenage Mutant Ninja Turtles: Mutants in Manhattan is a game which seems appealing on its surface, but one that I enjoyed considerably less each time I played. A visually-attractive four-player hack-and-slash by one of the action genre’s most prized developers, Mutants in Manhattan has a solid foundation for what should be an enticing comic book beat-‘em-up. But as the surface layer peels back, everyone’s favorite heroes-in-a-half-shell provide shockingly little in terms of depth and variety. With lackluster combat and highly repetitive level design, Teenage Mutant Ninja Turtles: Mutants in Manhattan is nothing but a mindless bore.

Mutants in Manhattan is as plain of an action game as they come. With a basic Turtles-vs.-Shredder premise, players take control of one of the four heroes and battle through waves of Foot Soldiers until reaching a stage boss. This shallow nature comes as a particularly frustrating disappointment given developer PlatinumGames’ pedigree for creating smooth and varied experiences with each encounter. Sadly, Mutants in Manhattan is more akin to Legend of Korra than Bayonetta, and the shallow nature shows how little TMNT video games have evolved since the series’ ‘80s roots. It’s as hollow as ever.

This lack of depth stems from simple combat. Each turtle has light attacks, heavy attacks, blocks, and counters, but these abilities never satisfy due to a rigid and clunky flow. Landing strikes and dishing out damage is always easy, but combat never feels like anything more than an unsatisfying exchanging of uncoordinated blows. It’s incredibly straightforward but most battles play out as nothing more than a button masher.

Ninjutsu is Mutants in Manhattan’s best attempt at spicing up battles by giving each turtle customizable special moves, but even these abilities fail to leave an impact. Each turtle can assign up to four special moves that provide stronger attacks or stat buffs, for example, and provide a competitive edge against some of TMNT’s tougher boss fights. However, assigning and keeping track of four special moves per turtle becomes an exercise in micromanagement and never feels worthy of the effort it takes to switch out moves from the game’s cumbersome menus. Given the already-basic combat, I found myself sticking with a configuration I liked early on and never felt compelled to change my moves again.

You can switch control amongst the four turtles on-the-fly, but doing so provides little gameplay difference to make the switch worth the effort. All four heroes have slightly varied stats, but none feel drastically different from the others. Donatello’s bow staff comes with the longest range, and Michelangelo’s nunchucks provide a more technical approach to offense, but the game’s dull combat never compels enough to care about swapping. Without any motivation to switch, I eventually stopped caring entirely and stuck to one turtle for the duration of the game.

That is, except for instances in which the inept teammate AI warranted it. The three turtles that are not under player control can be given commands such as ‘Protect me’ or ‘Go all out’, but regardless of the setting, the other turtles never seem competent enough to avoid basic danger. Instances of turtles walking through harmful laser beams, standing in roaring fires, or diving right in front of a moving train occur far too frequently and make any effort to care for your squad’s well-being seem for naught. This was often especially painful during boss fights, as your turtle brethren would constantly head face-first into an opponent’s strongest attacks and be eliminated from the fight. It’s best to just play as a lone wolf and ignore the other turtles, with the hopes that they’ll be available should they ever be needed.

Thankfully, Mutants in Manhattan does include four-player online co-op, and this is often the preferred way to play. Levels play out mostly the same as they would in single player, albeit with a slight difficulty spike, but the assistance of useful teammates helps with the game’s trudging pace. It’s a shame that multiplayer is limited to online only, though, as TMNT has always been a franchise prime for couch co-op. It’s understandable that the 3D structure of Mutants in Manhattan would not cater to a splitscreen mode, but playing locally with a friend would do wonders to soften the blow of its uninspired action.

Mutants in Manhattan’s repetitive nature is probably its biggest problem, though. Each of the nine stages plays out with the same handful of boring objectives: eliminate all enemies, defuse a bomb, invade enemy hideouts, etc. Several of those stages even take place in the same level, leaving me to think I had re-selected a completed stage. Coupled with the same repeated lines of obnoxious dialogue and same-old boss fights, Mutants in Manhattan is one of the most repetitive games I’ve played in years.

Teenage Mutant Ninja Turtles: Mutants in Manhattan feels like it could have been so much more. However, its faithful art style and talented studio are not enough to make up for its bland combat and extraordinarily repetitive design. Seemingly rushed to coincide with the new film release, TMNT deserves better than this.

Gaming Trend's resident amiibo collector, Matt's a lifelong gamer with a soft spot for Nintendo. As a new father, Matt often struggles to stay as involved as he has been in years past but can always be counted on to come back for some engaging geeky conversations. A resident of Philadelphia, he is currently working on building up his Man Cave with all things Marvel, Star Wars, and Video Games. As an old-school gamer, Matt firmly stands by his belief that gameplay will always be more appealing than story.
Related Articles: Teenage Mutant Ninja Turtles: Mutants in Manhattan
Share
Tweet
Share
Submit