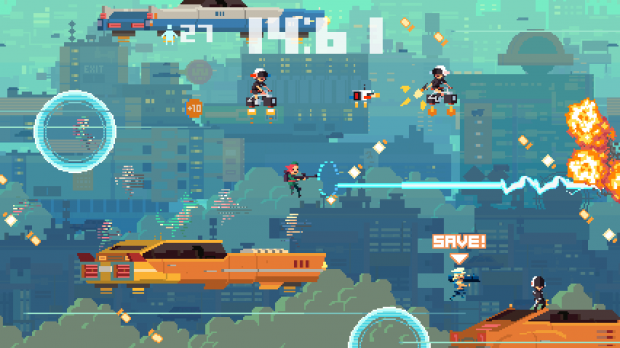 The goal of the Super Time Force is to travel throughout time and alter events in order to make the future more awesome. You’ll travel backwards and forwards in time to do things like save the dinosaurs from extinction, and download all yet-to-be-made Internet plug-ins, so that you don’t have to deal with regular updates. Each stage is a different flavor of reckless abuse of time-travel, each more entertaining than the last.

Super Time Force is designed to look like an old school 8-bit shooter like the original Mega Man, but after a few minutes of playing it becomes apparent that it’s nothing like any game to come before it. Players utilize time travel to get through each level, by returning to previous points in time and starting a different timeline with the same, or a different character and then can interact with and even alter the events that happened in previous timelines.

For example, if you start down a hallway and kill an enemy right as he crashes into you and kills you, you can then go back in time and benefit from or even alter that event. So when you walk through the hallway in the second timeline you can wait for your previous timeline character to kill and be killed by the enemy and then proceed unhindered or you can race ahead and kill the enemy before it kills you in the previous timeline, thereby altering that course of events.

The gameplay and level design is smart and modern despite the 8-bit graphics, and it’s nearly impossible not to have a blast toying with time in order to beat a level. Each stage must be completed in 60 seconds, so you’ll need the help of multiple timelines to get through each stage. Luckily, there are items to find along the way that can help. Glorbs will give you additional “Time Outs” (which allow you to reverse time and create new timelines), Shards will slow the flow of time to a crawl and give you a reflex advantage, and floating clocks will add time to the clock and give you some breathing room to complete the level.

Traveling through time and monkeying with historical events is addictive and finding creative ways to overcome obstacles by manipulating time is as entertaining as it is confusing. Boss fights make the manipulation of time even more important, as it is impossible (or damn near it) to defeat any of them in 60 seconds with one character. Instead, you’ll need to reverse the flow of time to add a second timeline of damage, and a third, and a fourth—all the way up to thirty (which I maxed out in my successful run with the final boss).

The one downside of Super Time Force is that it wasn’t very challenging. Since players have the ability to reverse time after each death, it is easy to complete every level and boss fight on the first try. It also only took me about six hours to complete the game in its entirety. The good news is that a “Hardcore Mode” unlocks after you beat the game, which causes each character to die permanently if they are not saved in a different timeline. This mode is the exact opposite of the original playthrough in that it is ridiculously hard, so hardcore gamers will still find something to challenge them.

The 8-bit visual design is spot on and incredibly detailed, despite the small amount of pixels, and the sounds design goes with it all perfectly. Low-res graphics don’t prevent the game from filling the screen with fifty different characters and hundreds of bullets while two dinosaurs make out in the background. Basically, it looks and sounds like the games you played growing up, except a whole lot better.

As if Super Time Force needed help being amazing, it also has a great, absolutely hilarious story, and that should not be understated. I have not had so many legitimate laugh-out-loud moments in a video game in a very, very long time. From the A-grade writing to the unforgettable characters, everything is perfectly tuned to fit the old school style and over-the-top game design. Also, without giving anything away, you’ll be seeing some familiar settings and characters that reference things that nerds everywhere love.

Super Time Force blew me away. This is a must-own for Xbox One owners, so don’t waste any…TIME…buying it.