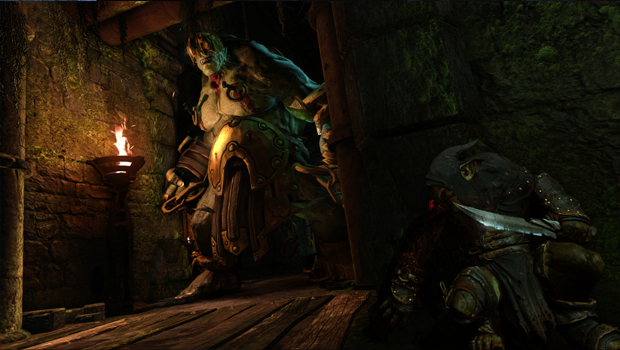 The bar for stealth action in video games has been set fairly high in the modern era of gaming. Once upon a time a game which boasted “stealth mechanics” was expected to offer little more than an invisibility spell, or maybe some lamely scripted scenarios where the player had to guide a character through a series of rooms without an all-too-obvious light being shined on them. Nowadays, at least the more hardcore crowd expects a stealth title to provide artificial intelligence that accounts for low light conditions, a limited field of view, reaction to sound and more. It’s a demanding standard, practically creating a sub-genre unto itself.  Styx: Master of Shadows is clearly made with the hardcore interpretation of sneakiness and subterfuge in mind. While it’s not a perfect game, Styx is well-executed enough to warrant a place in any stealthster’s library.

Styx: Master of Shadows follows the titular Styx, a grubby little goblin-creature skulking his way through the shadows as he strives to climb the trap- and guard-filled Tower of Akenash in search of knowledge and, more importantly, wealth. Aside from being an ugly little thing, Styx is also considerably weak as far as adventurers go – he sticks to stealth not just because he’s good at it, but because his discovery by the human and elven guards of the tower can swiftly lead to a decisive kicking of his little green ass. It’s a welcome change of pace from the dashing rogue or sexy roguette, playing a greenskin who looks like the sort of thing players would normally be slaughtering for low-level loot, though the deeper aspects of the story never caught on with me. Journeys of self-discovery are only so enticing, and as far as amassing wealth goes, I try that in every game that has anything resembling currency anyway.

I bet I could hit one with a loogie from up here.

Still, the story – as ever – is meant more to serve as a hook and a backdrop to the real meat of the offering: the gameplay. As mentioned, Styx: Master of Shadows is a stealth game that takes the s-word seriously. Sticking to the shadows, going unseen until the last possible moment, distracting your enemies and generally avoiding a fair and open fight at all costs is the name of the game here, and failing to do so can be a painful experience. Put simply, stealthing around is the main event for Styx, rather than a meaty optional way to deal with the challenges presented to you, arguably even more hardcore than the Thief series which really put this particular gameplay style on the map.

But it’s one thing to merely commit the player to the task of being a true clings-to-the-shadows brigand. It’s another to do it with appropriately compelling gameplay. Suffice to say, Styx manages to provide nicely on this front. All the usual tricks of the trade are here: staying in the shadows is essential to success, and the less light that hits Styx, the better concealed he is, and that means guards are less likely to notice him and promptly chop him into unappetizing green giblets. To that end, Styx’s enemies aren’t just the semi-attentive guards of the tower, but also the various sources of light – and as you prowl around, you’ll go through measures to snuff out candles and other things that scare away the ever-protective cloak of darkness the goblin needs to rely on. In fact, Styx can pick up a decent spread of abilities as he progresses through the game, allowing him to enhance the quietness of his steps or the deadliness of his surprise attacks. Still, most of these abilities merely serve as side-additions to the central weapon of attentively creeping about without drawing attention to oneself.

Just think of how sweaty that armor has to smell in this heat.

Said creeping is generally a challenge and a joy to engage in, thanks to the wisdom of placing the whole event inside of a very vertical tower. The setting means that Styx won’t just be creeping down what feels like one extraordinarily long hallway, but jumping for ledges, scurrying through tight spaces, climbing upwards and generally launching himself around, allowing him to display the more acrobatic side of the stereotypical rogue’s ability set. At times, the controls felt a bit ‘loose’ when it came to the more climbing or ledge-grabbing side of things – perhaps my timing was off, or perhaps the game was being a bit unfair in letting me determine when and where I could make a move to what seemed like a perfectly serviceable ledge. But overall, I found the experience an acceptable one, and more often than not I had fun and felt challenged, rather than felt I was being cheated out of what should have been wins in a ‘fairer’ system.

The one major negative for Styx: Master of Shadows may be, oddly enough, its stealth focus. For as celebrated as games like Thief may be, at the end of the day there has to be a reason why those titles are once-in-a-while appearances rather than real and serious mainstays, and it’s easy to figure out why: once you get your ass handed to you by the Nth time by the torch-wielding guard who decided to check up on a noise your goblin-character made, the urge to just lay into him with fists and blades becomes almost impossible to ignore. And, as a result, games that offer stealth tend to also come packaged with the option to beat the hell out of the guard and just Hulk your way through the rest of the area if you really want to. Not so with Styx, for the most part – which means that those of you with a limit to your patience for losses may want to ask yourselves if you’re truly masochist enough to soldier your way through this demanding experience. Of course, the masochists will end up having a whole lot of fun if they can put up with the frustration of challenging gameplay.

90% of roguery is leaning against a wall looking all emo.

And that observation really sums up the appeal of Styx. This is a well-done game, with good if not cutting-edge graphics, a decent enough story, playing to a niche action-RPG interest and doing so with skill. The real question to ask here is: are you looking for a game that demands finesse and skill in the art of avoiding combat, hiding in shadows, and dealing with a room full of guards in a way that typically has you leaving the room with no one aware you stepped inside to begin with? And can you deal with one vicious beating after another when you inevitably foul up and step out of the light a moment too soon, or make a step’s worth of noise too much? If your answer to both of these questions is ‘yes’, then Styx: Master of Shadows is worth checking out.

He may be an ugly little punk, but Styx still offers the player pure and largely unadulterated hardcore stealth action. It's still rare to find action games with a proper stealth emphasis, and rarer still to find them done as well as Styx: Master of Shadows. If you're looking for a game with good graphics and an emphasis on sneaking around in the dark and trying to achieve your aims with as little blood spilled as possible, you have your title right here.

Victor Grunn has been a gamer since the days of single-button joysticks and the Atari 800XL. When not lamenting the loss of the Ultima series or setting people on fire in Team Fortress 2, he's an aspiring indie game developer and freelance writer.
Related Articles: Styx: Master of Shadows
Share
Tweet
Share
Submit