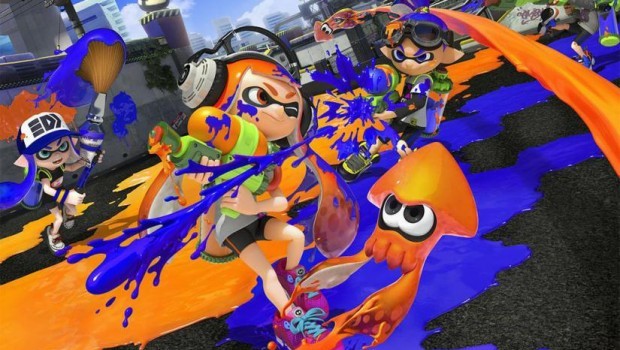 Nintendo has never really been known for their online efforts. Usually associated with family-friendly offline affairs, Nintendo has always seemed to be hesitant to embrace the internet battlefield. Sure, recent games like Mario Kart 8 and Super Smash Bros. for Wii U have featured strong online capabilities, but for the most part they still feel like only half-hearted attempts to get basic online functionality rather than the complete multiplayer suite that we’ve come to expect from modern games.

Splatoon changes all of that. It’s evident from the first time that the game is booted up that this is Nintendo’s strongest online effort to date. Launching players from the title screen directly into the online hub, multiplayer customization is at the forefront and the single-player campaign is quite literally off to the side where it feels like more of an afterthought. Online multiplayer is clearly the centerpiece, serving as Splatoon’s primary offering. And what an awesome offering it is; Splatoon is an absolute blast.

The basic premise of Splatoon casts players as customizable ‘Inklings,’ each equipped with a weapon capable of spraying the landscape (and your opponents) with globs of ink. Across all game modes, players will find themselves covering as much area as possible in their paint. The more you’re surrounded by it, the more advantageous you’ll be in regards to combat and maneuverability. Aside from using ink in firefights with enemies, players can also transform themselves into a squid at any time, allowing them to submerge into ink to refill their ammo and hide from opponents. More importantly, though, players can swim in any surface that their ink is sprayed upon, allowing for some entertaining traversal as they scale walls and slide beneath fence gratings with ease. Moving around each stage is just as much fun as the combat itself.

This is what differentiates Splatoon from other shooters. Part of what makes it so entertaining is how combat is not the driving force behind its multiplayer game types. In Turf War, Splatoon’s premiere multiplayer offering, rather than competing to reach a kill count, each team tries to cover as much of the map in their paint as possible within a three minute window, with the team that covers the most surface area declared as the winner. By the end of match, you may have the highest kill count, but if the map is covered in more enemy slime than a 90’s Nickelodeon show, you still might lose.

This creates an interesting dynamic where players are not simply out to hunt their opponents. You’ll certainly engage in battles – taking out enemy Inklings can slow their paint spread – but momentarily stopping other players only has a minor impact on the overall outcome of the match. It’s entirely possible to have the worst K/D ratio in the game and still be ranked as top player, simply by choosing to spend your time as more of a support player who drenches the landscape with ink. This makes Turf War a fun spin on multiplayer shooters where it’s much more than a cat-and-mouse deathmatch. It’s a frantic and entertaining game mode where you’re always contributing, even when not directly engaged with opponents.

In order to help maximize player efficiency, no matter how players choose to participate, there’s a number of customization options available. As players earn XP from matches, their online rank will grow, unlocking more weapons and clothing. Each piece of clothing provides a perk, such as boosts in attack, defense, or speed, so players can pick abilities that best suit their play style. From there, clothing can also be ranked up with repeated use, providing yet another boost and encouraging players to experiment. Players who wish to avoid combat may choose a boost in defense or speed to evade opponents, but if you simply wish to suppress the enemy team, attack bonuses may be more your style. The choice is entirely your own, but you can always find a loadout that works well for you.

There’s variety amongst weapon types as well. Inklings start with the ‘Splattershot Jr.’ pistol, which is middle-of-the-road from a stats perspective, but as your rank increases, so will your arsenal. Aside from sniper rifle and shotgun style weapons, there’s also an amusing paintroller that is entirely unique. Running with this weapon held to the ground causes a smooth stream of paint in your path, and while it does not spread as quickly as a wild spray from a firearm, it is far more efficient in its usage. Of course, while it’s hugely entertaining to crush unsuspecting opponents under the roller, it also leaves you defenseless from long range attacks and limits your vertical paint spread. Experimenting with each weapon type is part of the fun of mastering Splatoon, and each weapon has a context where it can be extremely helpful.

It’s a shame, then, that there aren’t customizable loadouts. Some weapons are more useful on certain stages than others, but you can only ever use what is currently equipped, rather than choosing a specialized loadout depending on the level that your game throws you into. Changing your gear requires you to exit back out to Splatoon’s courtyard hub rather than a quick swap on-the-fly to suit the situation. With loadouts being mostly standard in today’s shooter ecosystem, it seems like a strange omission that I hope is addressed in future Splatoon updates or sequels.

There is also only a limited level variety. Among the game’s five multiplayer maps, only two are available in each game type at a time, with available maps rotating out every few hours. This is most likely in an effort to avoid some sort of level voting process while also giving each map equal playing time, but it seems a little strange that not all maps are always available. That said, each of the five initial maps are well made and provide enough variety to distinguish themselves. As more maps are added in future DLC packs, hopefully the level selection won’t feel so limited.

During the many hours I poured into online matches, there were also several instances where there were noticeable balance issues. There were a few occasions where the majority of high-leveled players were placed on the same team while a group of beginners were forced to take a beating together. These matches often had enemy players literally inking up the area around the one and only spawn point, creating a situation where your maneuverability is at a frustrating disadvantage right from the get-go. While these matches were mostly uncommon, they were noticeably unbalanced and I hope that Nintendo can circumvent these issues in the future.

Multiplayer is also playable offline, but does not feature the same entertaining game types found when playing online. Rather, local multiplayer is confined to simple one-on-one matches where players race to pop balloons that randomly spawn throughout the same five aforementioned multiplayer maps. It’s a much slower game type that is sadly far less frantic and pales in comparison to the highlight moments found online. This mode is a mild distraction at best, and falls short of reaching the same heights that online multiplayer does.

This makes it all the more disappointing that Turf War is not playable offline in any form. Sadly, the online game types aren’t playable in local multiplayer, nor are they available with bot opponents, meaning that players are forced to hop online for the true Splatoon experience. Online play is clearly the main attraction for Splatoon, but it is disappointing that the game’s most appealing moments are not present offline.

In fact, further emphasizing the online focal point, the only other offline attraction in Splatoon is the game’s single player campaign. This is a simple mode that tasks players with completing linear stages to find a captured ‘Zapfish’ at the end of each stage.

Unfortunately, even this solo outing is a weaker offering. The campaign features the same mechanics as the multiplayer – it is still in your advantage to cover as much surface area in ink as possible – but this mode is far less interesting and never quite takes advantage of Splatoon’s unique gameplay. Sure, there are entertaining moments where you’ll climb an ink-covered wall or submerge yourself to avoid danger, but with a limited variety of weaponry and enemy types, the campaign gets repetitive rather quickly and never feels like more than just a generic shooter. This mode just feels tacked on, and while entertaining boss fights and the occasional power-up provide moments of fun, the campaign never quite reaches the potential that it has.

The campaign is on the shorter side too; each of the 27 levels clocks in at about 8-10 minutes each, and my full playthrough took only about five hours to complete. There are collectibles to find in each stage, but these are likely the only reason why you’d revisit a finished stage.

It’s disappointing that the offline modes are so limited. As much of a blast as Splatoon is online, the average campaign and lackluster local multiplayer are hardly selling points, and for this reason, it is honestly hard to recommend the game if you have no intention of jumping online. It’s clear that online play is the driving force here, and those who don’t enjoy competitive multiplayer are likely to find only narrow enjoyment.

Even despite these drawbacks, Splatoon manages to create a highly entertaining experience. It may lack some of the refinements of modern shooters and offer only limited offline value, but Splatoon’s online multiplayer is top notch. Nintendo’s strongest online effort to date is awesome, and while it could use a few additions, Splatoon’s gameplay is a highly entertaining affair that stands as one of Wii U’s absolute best multiplayer experiences.

There are a few drawbacks and limitations, but Splatoon’s frantic and addicting gameplay is a blast. This is Nintendo’s best new IP in years.

Gaming Trend's resident amiibo collector, Matt's a lifelong gamer with a soft spot for Nintendo. As a new father, Matt often struggles to stay as involved as he has been in years past but can always be counted on to come back for some engaging geeky conversations. A resident of Philadelphia, he is currently working on building up his Man Cave with all things Marvel, Star Wars, and Video Games. As an old-school gamer, Matt firmly stands by his belief that gameplay will always be more appealing than story.
Related Articles: Splatoon
Share
Tweet
Share
Submit