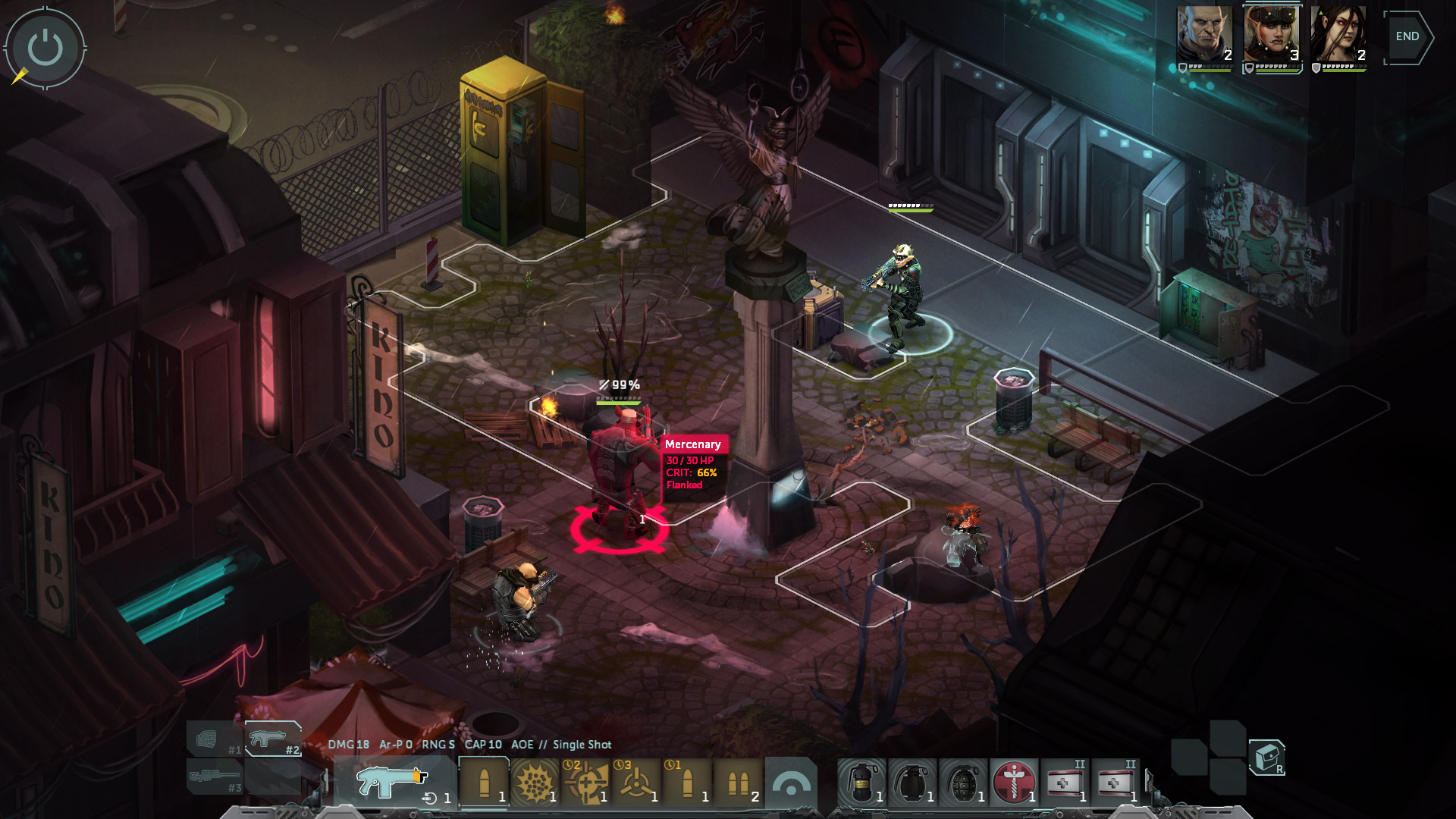 I’ve never felt more confident in the Shadowrun gaming revival than after having played Dragonfall Director’s Cut. It seemed that Harebrained Schemes were on the right track after successfully Kickstarting their game Shadowrun Returns, but its DLC expansion Dragonfall included a superior narrative, better characters, and a save system which offered up a more enjoyable experience than the original Dead Man’s Switch campaign in every way. The standalone Dragonfall Director’s Cut compounds on that progress with an improved interface and additional team customization — all without needing to own Shadowrun Returns. It’s not all smooth sailing, but this is the best Shadowrun video game to date.

Dragonfall’s universe is standard Shadowrun fare, where the Awakening of 2012 resulted in the emergence of magic and several races of metahumans: orks, elves, trolls, and dwarves. Technological breakthroughs followed in short order, allowing for cybernetic implants and the rapid expansion of the Matrix (Shadowrun’s take on what has become our Internet). This cyber-D&D setting is a cradle for the legendary fall of the dragon Feuerschwinge (hence the title) and Dragonfall’s plotline deals in large part with the fallout of that particular event.

True to its RPG roots, Dragonfall’s protagonist is yours to mold. You can either kick things off from a list of preset skill configurations, or build your character from a blank slate and a pool of karma points, Shadowrun’s leveling currency. You’ve got a host of directions to go, whether you’d like to be an in-your-face street samurai, a spirit-summoning shaman, a spell-casting mage, or even a Matrix-hacking decker. All choices are viable, but you’re best served to pick a direction and go with it rather than spread your combatant too thin. You also have a little bit of control over how your character looks, but it will really only matter as far as the profile picture. Anything beyond that isn’t a big deal, though, as you’re not likely to get a good enough look at your in-engine character to get upset about sub-Skyrim levels of customization anyway.

The story of Dragonfall kicks off several decades after the Awakening, with your customized character having narrowly escaped from a job gone bad, catching up with an old decker colleague Monika and joining her team in the anarchic city of Berlin. Any hope of personal stability is quickly dashed as your introductory run with this new team goes south as well, uncovering the start of a story ripe with mystery and conspiracy.

After this prologue, Dragonfall’s improvements to the original Dead Man’s Switch campaign become quickly apparent. You’re dumped into the meticulously detailed hub area of Kreuzbasar, a neighborhood that offers a sizeable space to explore, talk to locals, and shop at vendors without worry of ambush. It helps the city of Berlin feel much more persistent and alive than Seattle did in Dead Man’s Switch, even if it sometimes feels a bit too large when you just want to do a little shopping before the next mission.

The effective hub area lends a feeling of openness to Dragonfall that felt absent in Dead Man’s Switch. Rather than progressing through a totally linear path as in the previous campaign, you’re able to pick and choose when to do many of the missions available in Dragonfall. Even the missions themselves are larger canvases with multiple routes to success. The payoff in immersion is significant, as control in pacing and direction is no small detail of a good RPG.

The setting is complemented by superb writing every step of the way. Dragonfall fleshes out each experience with descriptive, novel-esque passages — even mid-conversation. You’ll enter a new area with more than just visual feedback, as the writing will describe the sound, mood, or even smell of the place. I found it refreshing that in moments when you’re presented with a choice — such as whether or not to kill a troubled shadowrunner, or how to respond to a prying question — taking the nice way out isn’t always celebrated, and is occasionally detrimental. There’s additional weight to these situations as a result. It’s a lot of reading if you want to get the most out of it, but if you resist the temptation to skip through, the payoff is worthwhile.

The writing goes a long way to make up for the sparse presentation. There’s no voice acting, no cutscenes, and even very little animation beyond walking about or participating in combat. Facial expressions rarely change during conversations where it feels like such emotional punctuation could be beneficial. The writing is strong enough to carry through these limitations, but it will require the kind of imagination that’s employed when reading a book — and if you’re not prepared for that, you may be left wanting.

Your team members in Dragonfall also largely benefit from the strong storytelling. They are far more memorable than in the previous campaign, each with a distinct personality and background story — like the human shaman Dietrich who used to front a punk band, or the stoic Glory who’s so loaded with cyber augments that she’s scarcely organic anymore. These details come into play in some side missions, such as one with an optional goal to liberate Dietrich’s estranged nephew who found himself caught up in a xenophobic hate organization. These efforts to flesh out your partners go much further than the previous campaign’s, and they make each interaction with them more meaningful, from conversations between missions to heated battles during a run.

Said battles in Dragonfall operate in much the same way as they did in Dead Man’s Switch — turn-based combat in the vein of XCOM and the first two Fallout titles. Your team takes a turn spending action points to move about the battlefield and dish out attacks or buffs, and the enemy team makes its move next. The Director’s Cut release makes a notable improvement to the user interface in these sections, displaying a handy bar across the bottom of the screen that clearly lays out options for actions and items. You’re also given some control over the progression of your teammates this time, choosing between two skills or traits with each level. Between these and a save-anywhere system that was sorely missing from the former campaign, combat in the Shadowrun revival is more inviting and engaging than ever.

Still, some trappings of the Shadowrun Returns engine remain. Since the gameplay is rendered with sprites rather than 3D models, there is no option to rotate the field of battle. This can make spotting cover occasionally problematic, especially when an area is crowded with selectable characters. I experienced more than a few maddening moments searching for that perfect pixel that would allow me to choose my intended target, only to accidentally misfire and ruin a closely contested match. But thanks to the new save system, such moments aren’t nearly as infuriating as they were in Dead Man’s Switch as the cost of failure is far less steep.

If you're new to Shadowrun Returns, skip the initial release and start with Dragonfall Director's Cut. Nearly every aspect of the Dragonfall campaign is superior to Dead Man's Switch, and there's far more to be excited about than afraid of. When backers were so eager to offer their support for Harebrained Schemes' Kickstarter campaign, Dragonfall Director's Cut is the game that made the investments pay off.

Matt has a love for video games that has existed since he could comfortably grasp a joystick and play Combat on the family Atari 2600. While fond memories of SNES and shareware PC games still dance in his head, he is dedicated to enjoying as much of modern gaming as possible on all platforms. Matt has served as a game critic for several publications since 2009. When not playing games and writing reviews, Matt is an Ethernet network engineer for an international bandwidth provider. He is a musician through schooling, as well as a recording engineer, and he remains active composing and recording music. Matt also is a Crossfitter and an avid fan of MMA and hockey (go Flyers!).
Related Articles: Shadowrun: Dragonfall
Share
Tweet
Share
Submit