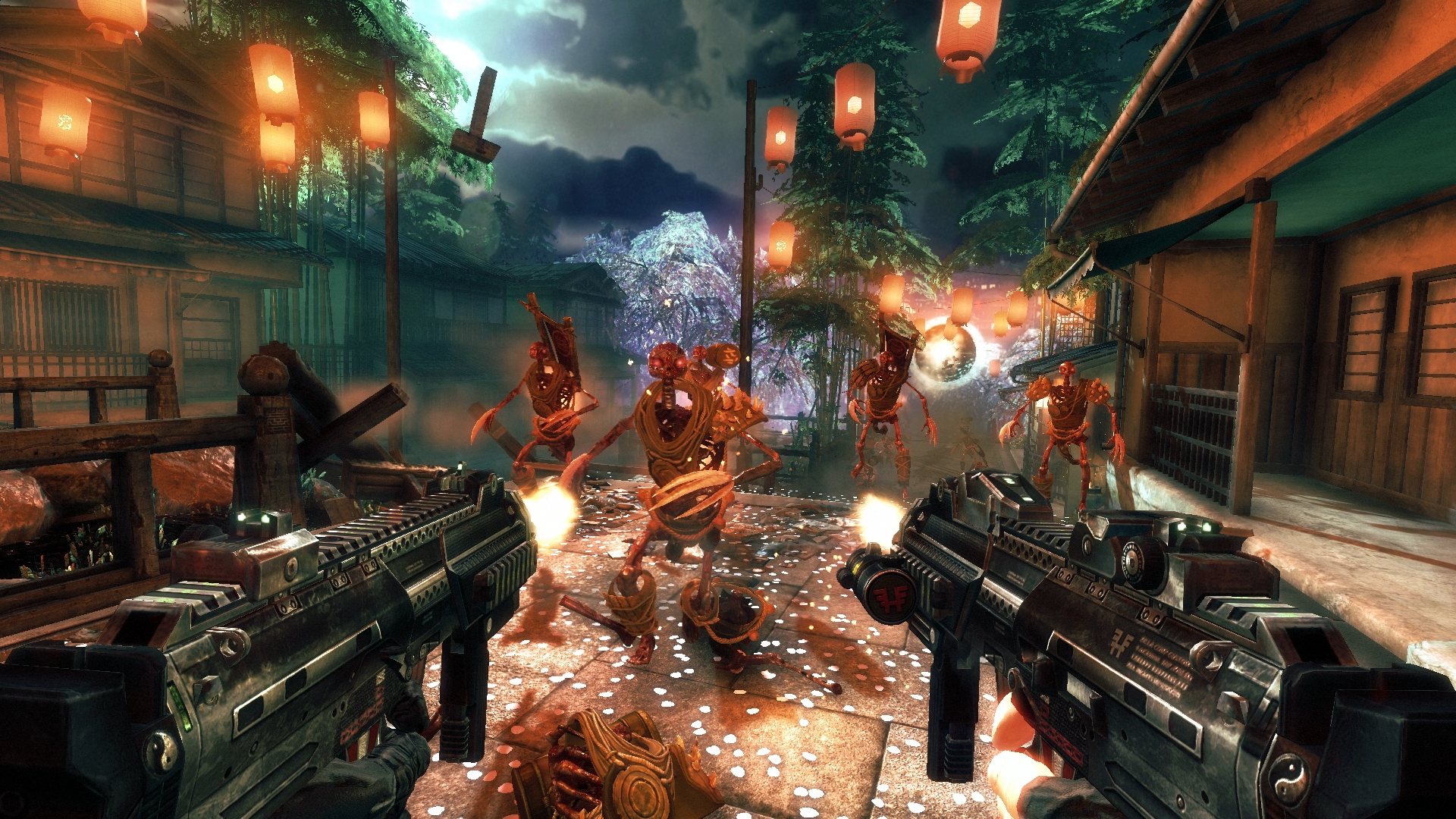 In 1997, Shadow Warrior released for PC as a spiritual successor to Duke Nukem 3D, and starred a terribly racist Asian caricature named Lo Wang. This isn’t a premise that sounds like it would be able to endure nearly twenty years later, and yet developer Flying Wild Hog revived Shadow Warrior last year on the PC, which has now made its way to the Xbox One and PS4. Lo Wang’s return is a successful one, with all of the purposely-offensive humor and over-the-top gameplay you’d expect from it.

Amazingly, Shadow Warrior’s plot is not to be overlooked, as it is engaging and becomes more serious and grounded as the game goes on. This is tempered by the silly combat and hilarious dialogue throughout the game. The player takes on the role of Lo Wang, a gun-toting, sword-wielding, ninja mercenary working for the mysterious Orochi Zilla, a powerful Japanese businessman. What starts off as a routine mafia transaction quickly spirals out of control into a demon-filled murderfest wherein Lo Wang uses his last name to reference his dick on a regular basis. Accompanying Wang is the smart-mouthed demon Hoji, who serves as Lo Wang’s guide through the world of pseudo-Japanese culture and mysticism. The plot works perfectly with the insane gameplay and general silliness that Shadow Warrior provides.

The combat in Shadow Warrior can be described as fast, bloody, and insane. The player is given ninja stars, a samurai sword, and a lot of guns to blast through hordes of ninjas, police officers and demons in one of the messiest first-person hack-and-slash experiences I’ve ever played. The guns can be a little difficult to use, as the aiming system can be a little unwieldy and some guns feel underpowered, but the swordplay is a lot of fun and is intended to be Wang’s tool of destruction for the majority of the time.

Lo Wang also gains magical abilities to aid him, which include healing spells and telekinetic push abilities. My personal favorite is an ability that allows Wang to spin in a whirlwind attack that decapitates everyone around him. These abilities help to round out the combat and give players a multitude of ways to go about any given combat scenario, although I was mostly content just slashing enemies to bits.

Lo Wang has many upgrade opportunities at his disposal as well, which are cleverly broken into different categories that can be upgraded by different means. Karma, for example, will allow the player to purchase certain modifiers, while money allows the player to upgrade their equipment. The options for how the player can evolve and upgrade Wang are pretty vast, meaning that the each person can upgrade according to their play style. I like to run in swinging a sword, so I need to be able to take a lot of damage, so I upgraded healing spells, damage resistant perks, and maximum health modifiers. This upgrade system can be a little complicated, but is well-worth taking the time to learn, as it’ll make Lo Wang an even bigger badass according to each player’s personal style.

Shadow Warrior looks great on the Xbox One, for the most part. Slicing a demon into multiple pieces has never felt more rewarding, but some elements, like human characters are low-res and a bit fuzzy. The sound, however, is great. The music is fast-paced and has an Eastern flair to it, and the sound effects are top-notch. The voice acting is also surprisingly good, especially from Wang’s sidekick Hoji who helps out with a lot of the exposition and banter.

Shadow Warrior lasts about 20 hours, and is well worth the $40 price tag. The combat is awesome, the dialogue is hilarious, and the excessive gore is a guilty pleasure that never gets old. Shadow Warrior is one of those games that reminds us that gaming, at its core, should be fun, and it delivers fun times in a big way.

Lo Wang returns with a glorious vengeance in Shadow Warrior, in a hilarious, violent experience that no player should miss.

You know that jerk online that relentlessly trash talks you after every kill? That guy was probably Travis "Tie Guy" Northup. Competitive, snarky, and constantly wearing a tie, Travis has been writing his opinions about electronic media since he was a teenager, and is pretty much the only person to hold his opinions in high regard.
Related Articles: Shadow Warrior
Share
Tweet
Share
Submit