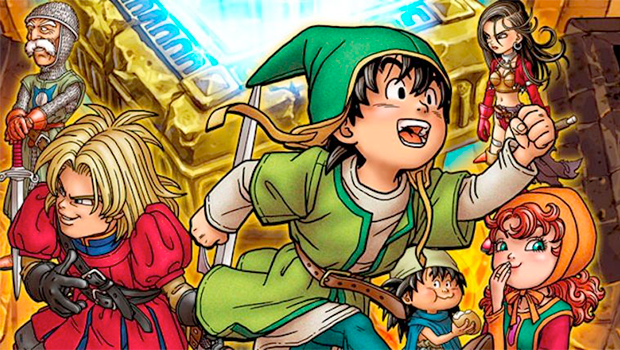 Dragon Quest VII: Fragments of the Forgotten Past opens with a sense of anticipation. “The entire world is just this little island,” a cheerful old woman says, as you look at a vast, empty ocean, broken only by one tiny island. You can’t help but feel excited by the prospect of discovering new islands and filling up that empty blue ocean with unknown territory, just waiting to be explored.

Dragon Quest VII is a classic PlayStation JRPG which holds up remarkably well, especially when combined with upgraded graphics and a handful of new features. The story relies on a few ‘fetch quests,’ has a few outdated tropes, and is remarkably reliant on mechanics like “you must speak to X before Y in order to access Z,” but it has a huge world, an engaging story and no shortage of things to do. The main storyline by itself can easily take more than 70 hours to complete, when combined with the various side quests, a monster farm to build, and additional dungeons unlocked via the StreetPass feature, and it’s easy to spend over 100 hours on this game.

The game tasks you, a silent, player-named hero, and a small band of characters with a trek back in time to change history again and again, saving a multitude of lost islands, restoring the world, and stopping a great force of evil. The formula is pretty simple: Find enough colored tablets to travel back in time, save that town from being destroyed, collect another tablet fragment, head back to the present, visit the current incarnation of that town, where you will most likely collect enough fragments to travel back to yet another historic village which needs saving, rinse and repeat. It comes very close to being repetitive, but the plot injects just enough variety and emotion into the routine to keep it from being overly monotonous. For example, you may have to travel to a present-day red fragment town in order to acquire the item necessary to save a historical blue fragment town from certain destruction, and you may hear tales about how a survivor from an island you previously saved has traveled across the ocean to try and warn others about an impending danger.

The story is engaging, and both the world and its features grow slowly, which can feel a bit sluggish at times, but these emerging features help to keep this very long game fresh and interesting. I played an hour before encountering my first battle, and logged more than 20 hours before accessing the ability to change job classes. While the story is solid and has held up well since it was originally written, there are a few key elements which hold it back from being amazing. Many scenes which could have been infused with the most human elements, which could truly draw the player into the story, are glossed over with a brief text summary. Some victories, usually the plots which revolve around beating a big, bad boss monster, are truly celebrated, while stories with more complex, bittersweet outcomes were often summarized, taking place off screen, leaving a missed opportunity for a true emotional connection with these characters. Still, there were several occasions where I traveled to the present and learned of the fate of those I had befriended from their ancestors and couldn’t help but feel proud of them. Other times, I found myself sitting silently for a few moments when I found the tombstones of old friends, sitting abandoned and forgotten, too weathered for the inscription to be fully read, leaving me forever unsure of what happened during their final days.

Find unlikely friends as you travel back and forth through time

The soundtrack is good and the score fits the emotion of the moment, though the music feels limited for a game of this scope. Likewise, wardrobes and character designs are limited and repeat regardless of the location or the time period. The localization team put a great deal of work into creating distinct dialects for various islands, but this effort is largely undone by the fact that all towns and all characters look and sound the same. Instead of feeling like distinct cultures, with their own, distinct look, music and accents, they simply feel like the last town you helped, just with a different way of speaking. Dragon Quest VII could have felt so much more epic, the world so much more large and impressive, if different time periods and regions had their own distinct look and sound, even if they were only variations on the main themes.

Unlike many JRPG’s, Dragon Quest VII did not feel terribly grind heavy; in fact I generally found myself grinding for gold, in order to keep my whole team well equipped, rather than experience points. The battle system is simple and turn based, though the command menu is a little more complex than it needs to be. Commands are broken down into attack, magic, which is further broken into offensive, defensive and other, and abilities. Not all characters have all three kinds of magic and abilities, and the menu option is not greyed out if there is no ability for a character to use. This can make issuing commands something of a task, and I often found myself checking empty menus because I couldn’t remember if the spell I wanted was classified and found under ‘defensive’ magic or ‘other.’

The battle system is streamlined by a tool which allows you to issue blanket auto-attack commands to your party, such as “Don’t use magic” and “Show no mercy,” but you still have to manually enter a command for each of the main character’s turns. While Dragon Quest VII is not grind heavy, it is also not battle-light, and I found myself yearning for a real auto-battle feature. Typical of the Dragon Quest series, the world is filled with a huge variety of distinct, odd and humorously named monsters for you to fight, vanquish and even befriend.

If the main story line is simply not enough, Dragon Quest VII offers an array of side quests for the truly dedicated. You can build a monster farm, fight special bosses inside monster dungeons, collect monster stamps, or go for completion and master more than 30 different job classes. I personally enjoyed tracking down a set of characters who used to be monsters, but have become human. Inviting these unique characters to move into a special, player-managed monster town unlocks buildings and features found nowhere else. The game felt very satisfying, and I personally can’t wait to access and explore a few StreetPass dungeons.

Dragon Quest VII: Fragments of the Forgotten Past

Dragon Quest VII: Fragments of the Forgotten Past is a solid JRPG remake with more than enough plot and gameplay to keep RPG fans happy. The turn based battle system is light on grind, filled with Dragon Quest's trademark cast of colorful monsters, and offers a mostly hands-off feature for fights. With an engaging story, a huge world to explore, and plenty of side quests and additional content, there are many of reasons to get lost in the past.

Chaotic wholesome. Dice-maker. DM and TTRPG performer. Shiny Pokémon hunter. Kay works in video games during the day, speaks at conferences during the weekends, and pretends to be an orc, tiefling, android, etc by night.
Related Articles: Dragon Quest VII: Fragments of the Forgotten Past
Share
Tweet
Share
Submit