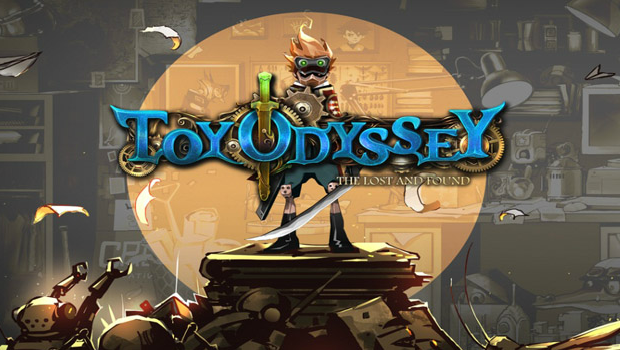 Toys coming alive is somehow a consistently winning formula. Toy Odyssey: The Lost and Found takes that formula and plunges it into a melodramatic darkness, pitting you against hordes of evil, discarded toys in side-scrolling, Castlevania-style platforming battles. A game that reminds you of the good ol’ days of gaming, but also brings to mind the very worst qualities in those classic games as well, Toy Odyssey is a frustrating mix of great gameplay and easily avoidable problems.

While platformers have always relied on a high difficulty level to expand their game, Toy Odyssey takes that to an entirely new level. Enemies are frequent, ruthless, fast, and incredibly hard to predict. The platforming is narrow and mostly vertical, leaving you exposed to attacks and falls. Add to that the fact that unless you are able to return to a home base the level completely resets, giving you an all new random scheme to navigate.

In Toy Odyssey, a action figure named Brand comes to life, wielding a sword and a plucky attitude. Brand meets other toys, makes friends, and improves himself and his bedroom base in an effort to stave off the darkness. That darkness, a chaotic essence that controls the night, brings to life numerous discarded toys that stand between you and your goals.

A platformer in the vein of Metroid, Toy Odyssey is set up with large vertical rooms that you must climb, as well as long corridors. The map is revealed through exploration, and special items on the map that can expose large areas. You start from a bedroom that serves as a home base, and can travel either left or right from there. As you move further up the home, the enemies get tougher.

Movement and jumping is very smooth, even at the start where you are very basic. As you gain powerups, the game provides a very large buffet of fun ways to get around. The platforms are narrow most often, but I have found very little in the way of bad layout, even with the fully random placements. The issues I do find, however, are pretty major. Some doors lead to areas without floors, or falling platforms, which cause fall damage.

Battles are tough and a little unfair, with enemies that are faster and that have little to no “blowback” effect. Getting a hit in can often lead to an instant and unavoidable retaliation. Enemies also are randomly placed in each room, and sometimes this can lead to all enemies being crammed into one area, leading to instant death. With that said, the battles are fun and you can get a little bit of a upper hand on some enemies by learning how to trap them against walls.

Brand can be updated through his equipment, by spending “gears” you collect in the house. This raises your HP and also provides you with special abilities. While you explore, you’ll find cards which open up craftables, such as weapons and gadgets. I really like the depth of custom options here, and I love that the cards have to be found before you can create the item. Another endearing feature is in the way Brand’s equipment physically changes as you level it up, making him a space marine, or a cowboy, and many other great outfits.

You can also update the home base, via special constructs that help you store items and protect the base. Protection of the base is a passive event that occurs each night after you return to base or die. In the house, you collect items, free prisoners (little pawns from chess games), and those items are stored in the base. Nighttime raiders come and steal the items, and also recapture the prisoners you free. Perhaps most interestingly, even the named and important toy figures in the base can be captured and must be rescued.

There are so many Easter Eggs peppered throughout the game that it can be a bit overwhelming. Some are knock-offs, such as a Gohan-esque character found in the main bedroom, and some are blatant and obvious, like the iconic John Lennon portrait that you’ll find all over the house. A disturbing amount of items in this house seem to be related to Nazi Germany. Some portraits, bi-planes in the background, and a ghost-like picture of a SS Officer that looks like Scooby Doo. I don’t know if that is just a weird coincidence, but it makes me think the owners of this house are “history buffs” at the very least.

The game is a very spooky one, mixing some humor in with a pretty creepy backdrop of a dark house. You have to turn lights on in each room, otherwise you fight in the dark. Creepy music interspersed with babies crying fits perfectly with the whole theme. I also find a lot of charm in the hand-drawn style that reminds me of children’s storybook animations. The game uses several interesting elements as platforms that fit perfectly with the background, such as chairs, easels, wardrobes, and many other items.

Toy Odyssey: The Lost and Found

Toy Odyssey is marred with some old-school platforming woes that should not be featured in a 2017 release, but this Metroid-style nighttime toy adventure also provides lots of fun and plays fine enough to be worth the frustration. Lots of difficult platforming challenges and fighting await you in this dark and spooky title, if you can get past the random generation issues and unfair pitfalls.

Patrick Rost has been with Gaming Trend since 2013. At first focused on sports coverage, Patrick has gone on to cover a wide range of games and other products for the website. Outside of Gaming Trend, Patrick writes and records music, grinds perpetually in Elder Scrolls Online (PS4), and lives day to day with his two dogs, Bob and Stella.
Related Articles: Toy Odyssey: The Lost and Found
Share
Tweet
Share
Submit