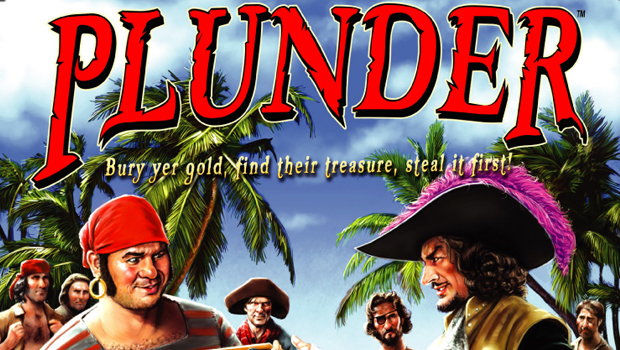 I remember playing Clue when I was very young. It is one of the first boardgames that I vividly remember playing. I also vividly remember when I realized that it was flawed. I really enjoyed the deduction of the game, but found myself frustrated by the roll and move aspect of information gathering coupled with people calling your piece back to rooms that you no longer needed information on. It did not take long for my older sister to figure out it was a viable stalling strategy to simply call me back to whatever room she was in to thwart my progress. Needless to say, with the mountain of modern games to play, Clue has not been played in a long while. However, I still get that itch to put on my Sherlock Holmes hat and practice my deduction skills.

While Plunder is not anywhere close to the theme of Clue, it has distilled the mechanics of simple deduction into a neat and tidy game. In Plunder each player is trying to figure out where the buried treasure is. If you are able to figure it out first, you will be awarded the most points. But beware, while there is plenty of loot for you to grab, everyone else is looking for a chance to grab your stash as well.

All treasure is located on an island, under a marker and protected by a trap. For example your treasure could be on Whale island, under the crossed palm trees with a poison trap protecting it. There are six different islands, six markers and six traps. Each one is numbered one through six with each category being color coded, islands are green, markers are blue and traps are red.

At the beginning of the game each player is dealt one island, marker and trap card. This represents where their treasure is located. Players also receive a dry-erase note taking sheet and some claim cards. During the game players keep track of information on the note sheet which is well laid out for the task at hand. At any point a player may make a claim by recording where a treasure is located on a dry-erase claim card, and then place it in the center treasure chest. These claim cards simply have all of the different symbols printed so players just need to circle one in each column. At the end of the game this treasure chest is flipped over, so the first claim in is resolved first, so it is better to claim early!

Each round, the active player flips over one card from each of three guess decks. These decks are made up of cards with one of the six symbols for the three location categories. The active player then can draw one additional card to replace one of the previous cards. Each other player announces whether or not any of the guess cards matches one of their assigned treasure cards. Play passes to the next player until everyone has used all of their claim cards or 15 rounds have passed.

At the end of the game the claim markers are revealed and scored. Each person starts with six points in their own treasure trove. The first person to claim a given treasure steals three points from the owner. The next player steals two points down to the last person stealing one point. Players total all of the points they stole, along with any points their treasure is still worth and whoever has the highest score wins. 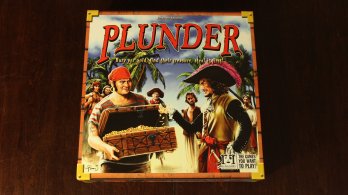 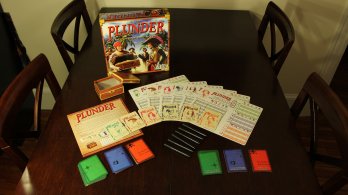 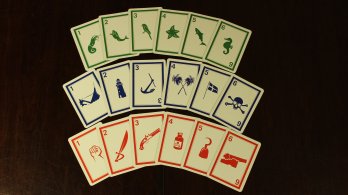 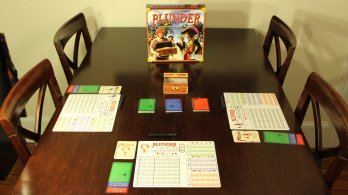 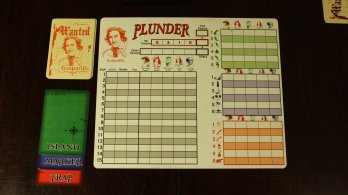 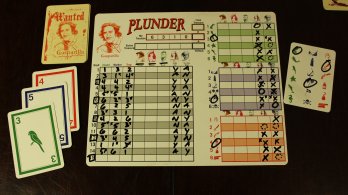 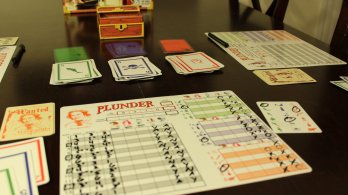 Plunder’s components are straightforward and to the point. The cards are all white with a single bold color corresponding to its category. The icons are all easy to distinguish, and players can use the numbers instead if preferred. The note taking boards are laid out perfectly for the deduction needed in the game. Thankfully all of the dry erase surfaces in the game are easily wiped clean.

Plunder says that it can play two to six people, however I have no idea how you would play a two player game. It would come down to who could guess the other player’s information first, but because you don’t pick the guess cards, this seems too random. With four players and up the game shines as everyone is trying to figure out both what they know and what other people already know. The rules are simple and easy to learn. Games take about 45 minutes for people who take their time. An interesting variant that would add a significant amount of tension would be to play with a timer. In that case, a game could be played in under thirty minutes.

Plunder is not for players looking for thematic excitement. In general games are subdued and quiet. The only noise that players make is the ‘Yay’ or ‘Nay’ when a guess is made. Other than that players are frantically writing notes and trying to figure out the puzzle in front of them. For that matter, the theme is almost definitionally pasted on. It could easily have been re-themed countless other ways as the deduction is purely mathematical. I don’t particularly fault Plunder for this, as the theme is good enough to not be distracting. Pirates, treasure, good.

My mother is a math teacher who loves teaching logic, so I grew up with similar logic puzzles. Any puzzle accompanied with a deduction grid was (and still is) a treat. Plunder’s logic is so pure and unobscured that if you like this type of brain activity you will love the game. The flip side is that there is not a ton going on beyond that. It is a simple game, not too much flair not too much show.

The largest flaw, and this is true with most deduction games, is when a player makes a mistake. Even one mistake can throw the whole game off. As an example, during a four player game, all but a single player turned in claims very early on in the game. They were all claims dealing with the odd-man-out’s buried treasure. It turned out they all made claims based on a ‘Nay’ that should have been a ‘Yay.’ The fourth player in question did not mean to misinform, but that meant those three players stopped trying to guess the fourth player’s treasure which threw off all of the end game scoring. This is not necessarily a fault of Plunder, but more of deduction games. Plunder is best played without any distractions going on around the game.

The scoring seems odd. As there is no direct way to block someone from guessing your treasure, it seems weird that a player is penalized when other people guess where their treasure is. A player could get lucky, buy others not drawing the right combination of guess cards, and get a bonus six points. Players have no real way of protecting this bonus, it is more or less random. An easy solution would be to not play with treasure being subtracted from end scores, simply using the points players generate from guessing.

Due to the lack of out-loud guessing players are in the game the whole time. It is more than possible that a player made a hasty choice and you still have the opportunity to guess correctly. Plunder is a game where all players feel good at the end of the game, because most players have figured out the puzzle by that point. The added scoring does not diminish from the personal victory of solving the puzzle. This can go the other way with people who are not as logically adept when they are not able to make any sure guesses by the end of the game.

For a game that is focused on keeping your information hidden from other players, it is odd that player screens are not included. We end up putting the note sheets inside of other box lids to keep notes secret. If you were to play without some sort of screen, it would be too easy for a player to in inadvertently glance over at someone else’s sheet and ruin the game. I was a bit surprise to see this omitted.

Plunder sets out to be a game about deduction and logic. If you embrace it as that, you will find it pleasant and challenging. If you go into Plunder thinking it is about pirates or something with evocative theme, you are going to be let down. I only recommend this to gamers looking for a solid deduction game, it is really good at fitting that niche. Just be aware that its appeal is limited. Not everyone is going to like this game. If you are up for it, grab a marker and your hybrid Holmes / Blackbeard hat, and find some treasure.

From Trading in the Mediterranean to FPS, I love games. While I grew up in a house without consoles, PC gaming and board gaming were a large part of my formative years, and continue to influence my life. In this golden age of board gaming, I have jumped in headfirst in to anything table top. As a ludilogical student, I love thinking about how games work, their mechanics, their elegance and most importantly, enjoying how fun they are. Favorite Board Game (at the moment): Twilight Struggle Favorite PC Game (base solely on play time): Tie between WoW and DII Fell free to email me: comments, concerns, questions, feedback, rants, and/or suggestions.
Related Articles: Plunder, Tabletop
Share
Tweet
Share
Submit