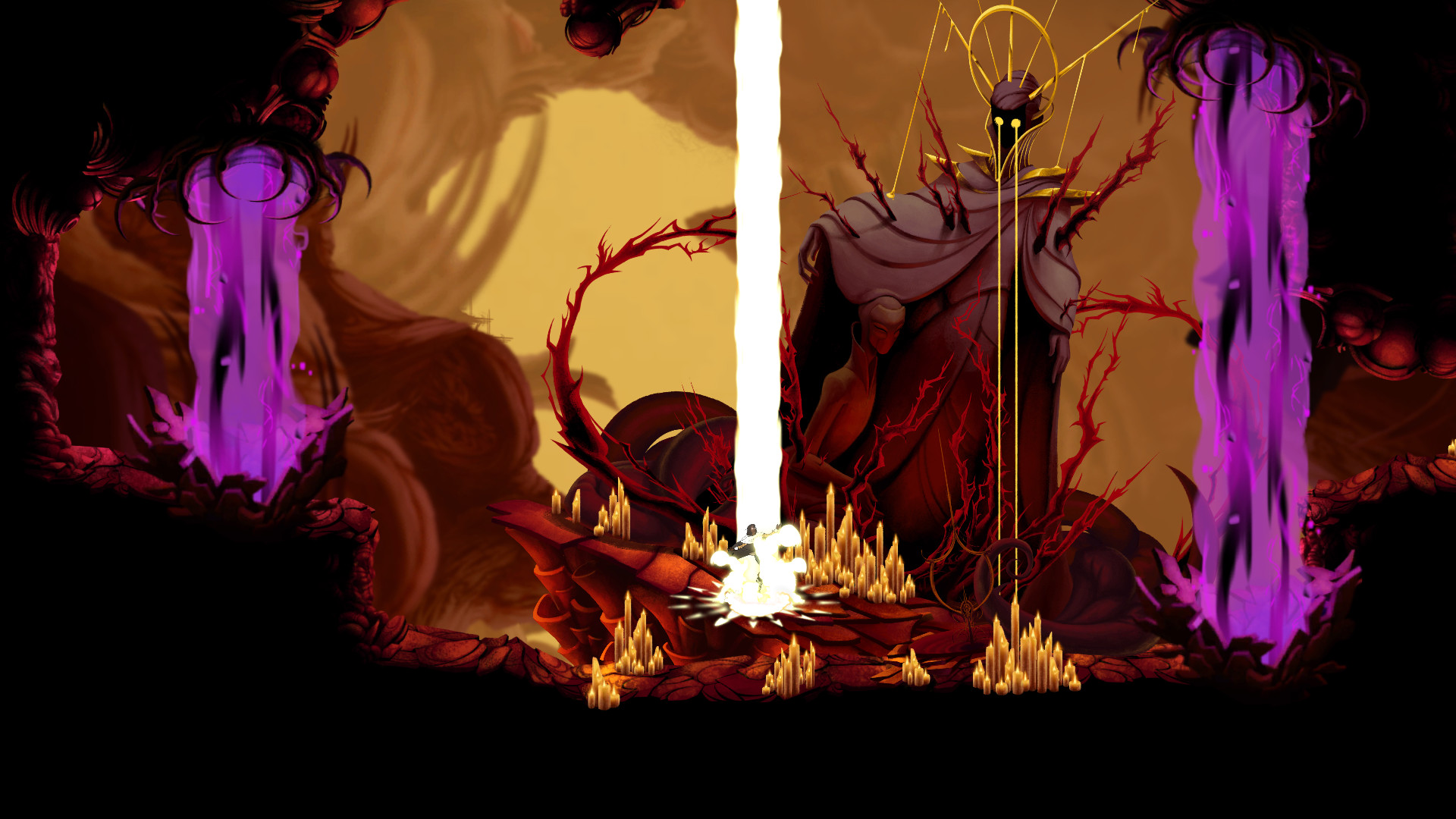 Some genre mashups go together like peanut butter and chocolate, others, not so much.  While the roguelike genre had been mashed together with just about every type of gameplay under the sun, Sundered represents an attempt to make it work with the Metroidvania genre, a seemingly impossible task given how vastly different the level design of each genre feels.  While it’s not a perfect mix by any stretch of the imagination, Sundered is a beautifully drawn game with an interesting branching upgrade system and intense platforming.

Sundered casts you as Eshe, a woman in a strange, Lovecraft-inspired world, tasked by a floating crystal called the Shining Trapezohedron to find powerups, fractions of advanced, unknown beings, and other such artifacts.  While this setup doesn’t really set the world on fire with innovation, the world of Sundered is a hand-drawn masterpiece, full of strange creatures that seem a strange mix of mechanical and paranormal.  The whole thing is a visual treat, especially the strange areas where the reality of the world seems to warp and come apart.  There are also plenty of massive, bizarre boss fights that defy any sort of explanation, all unlike anything you’ve ever seen before.

Sundered’s ruined landscapes might not be a nice place to live, but they’re certainly worth a visit.

The main “choice” of the game is whether you’ll resist the Shining Trapezohedron’s promises of power, going through the game with just your basic upgrades, or if you’ll embrace the dark powers he promises you at the expense of your sanity.  This isn’t really all that different from the same “good or evil” moral choice you find in a lot of games, but, given the high level of difficulty, giving in to the promise of dark power can be very tempting.  All of this come into the great world building that brings together the game, with plenty of lost civilizations, fallen gods, and strange, mind-bending scenery.

Sundered is really, really hard.  That generally comes with the territory of a roguelike, but there are a lot of moments where it can start to feel a bit unfair.  For example, the mechanics of combat are punchy, fast, and responsive; enemies telegraph their attacks with just enough time for you to dodge-roll out of the way and deliver a counterattack, and you’ve got enough health and shields to hold you over under pressure.  However, the way Sundered handles enemy encounters can feel at times beyond frustrating.  Most of the time, rather than entering a room and finding it full of monsters, the monsters will instead enter the room from the one in front of you in huge numbers, making it easy to get overwhelmed.  Sometimes, they’ll spawn behind you instead, from the room you just cleared, and, just as frequently, they’ll come at you from both directions.  When this happens, especially early in the game when Eshe’s at her weakest, it’s best to accept that you’re just not going to progress much farther this round and try to take as many of the creatures with you before your inevitable death by monster-dogpile.

Face it: after enough encounters with these guys, you’d start to give over your soul to a dark evil power, too.

Being a roguelike, death is a constant feature in Sundered.  Fortunately, it’s also the primary means to upgrade your character.  When you die, you keep your experience points and can use them to purchase upgrades at the Shining Trapezohedron’s shrine, which features a sprawling tree of perks and upgrades.  During this time, the map also rearranges itself, though not to a huge degree.  Upgrades, boss fights, and landmarks stay in the same spot, and the map is approximately the same shape every time.  Everything in between, however, is free game, meaning you’re free to hope the more blatantly unfair enemy encounters are replaced with more manageable, but still really fun and challenging, platforming sections, which make good use of the game’s metroidvania aspects.

Speaking of which, it’s unfortunate that there’s no checkpoints in the game.  While the world map is laid out in such a way that all paths branch out, using the Shining Trapezohedron’s shrine as a hub area, there’s still a lot of backtracking, especially in the early game.  There are also plenty of shortcuts to make the journey back to the boss fights more manageable, but some checkpoints would cut down on a lot of the frustration that come from the repeated deaths.

Sundered’s shrine provides a nice place to rest, as well as a complex perk system.

There are a lot of technical issues that I noticed.  Load screens after deaths are criminally long, especially considering that one of the main draws of a roguelike is that death is near-constant.  There are also a lot of graphical glitches, like random purple pixels around the UI.  At one point, the world the game created trapped me in a sealed room full of sentry turrets that kept respawning whenever they were offscreen, leading to a lot of experience points but absolutely zero progression.  Also, while I only got to play the PC version, I’ve heard that the PS4 edition has a lot of issues with random crashes during the loading screens.

Sundered is beautiful, tense, and frustrating enough to make you want to throw your controller. If you can make your way through it’s overwhelming combat encounters, you’ll find a platformer that’s well worth the madness.