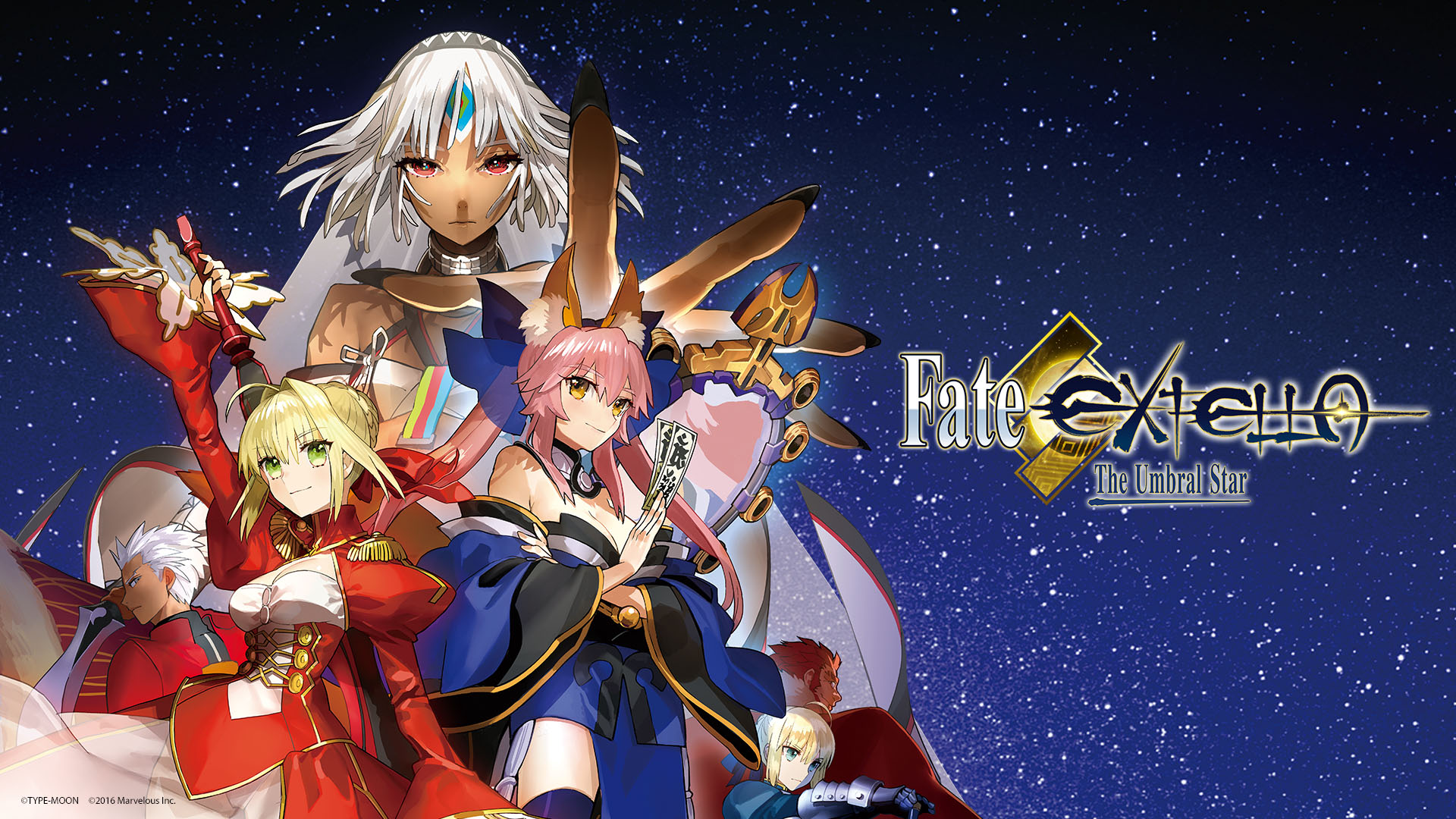 With Fire Emblem Warriors having no concrete release date beyond just “2017,” I’ve been starved for horde-fighting action starring characters from one of my favorite series. I loved Hyrule Warriors and its sequel, Hyrule Warriors Legends, and I just really wished that there were more games that took the mashup concept and ran with it. I suppose the Holy Grail heard my wish, because along came a Switch port of 2016’s Fate/EXTELLA: The Umbral Star, satisfying my hunger for running around beating up a ton of guys as some of my favorite characters from one of my favorite anime universes.

Now, if you wanted me to tell you what the story of this game was…I couldn’t really tell you. I’m certainly no slouch when it comes to the Fate series — I’ve seen the original Fate/Stay Night anime adaptation, the newer adaptation of the Unlimited Blade Works route, along with its prequel, Fate/Zero, and played the original visual novel, so I felt that I was pretty well-prepared for Extella. Boy, was I wrong. As it turns out, the events of this game take place immediately following Fate/Extra, one of the few pieces of the Nasuverse that I haven’t already experienced. Apparently I missed a great deal, because there was a Holy Grail War on the moon, which is really some sort of enormous automaton that houses an ungodly amount of energy, and a whole bunch of other stuff that seems incredibly strange. Also, Saber wears red now. Like I said, crazy stuff.

Seriously, Saber, you look better in blue. Also WHY ARE WE ON THE MOON PLEASE EXPLAIN

None of that really matters, though, because this is a Warriors-style game. We already know that the story’s gonna follow 2 opposing armies fighting each other in grand-scale battles, but I’ll get to that later. You play as the victor of the aforementioned Grail War, who you get to name — unless your name isn’t good enough, apparently. I had to change up the name I usually use for my characters because, despite having a character limit, my name was still too long — even though I was under the character limit. I’m treated to a weird flashback that probably only makes sense if you’ve played Extra, and then a hearty helping of dialogue between Saber and my character — apparently Saber rules over the SE.RA.PH, a virtual world inside of the moon, and needs our help conquering it. The cutscene graphics actually look a bit rough, if I’m honest. The opening animation was well-presented, but in-game graphics are definitely nothing to write home about. Once the introductions are through, we get to our hub room. From here, you can advance to the next story mission, check details on the bonds between you and your Servants, speak to Saber, or customize what Install Skills you have equipped (these give you bonuses, such as upping your attack damage, making your abilities charge faster, or applying elemental effects to your attacks) — all pretty standard content for this type of game.

Well, at least your swordsmanship is still as potent as ever.

After sitting through all of that dialogue, I couldn’t wait to just jump in and start mowing down enemies, and on that front, I was not disappointed. The battlefield was instantly familiar — sectors controlled by either your faction or the enemy’s dot the map, and the tides can shift as the battle goes on, with your own troops rallying or the enemy forces invading. The action is the same as ever — slightly repetitive but incredibly satisfying hack-and-slash. Your goal is simple — defeat enough enemies in a sector to make the sector bosses appear, and clear enough sectors to make the stage boss appear. Standard banter between your commanding officers (in this case, Servants who will be familiar to those who follow the Fate series) pops up from time to time, and the writing, while nothing very groundbreaking, is serviceable and entertaining. The ability to switch between a main Servant and a sub Servant was helpful in breaking up the monotony as well — if I was tired of playing as Saber, I could switch to Archer (Counter Guardian EMIYA) and enjoy seeing his combos as well. It’s a smart way to give the player more options in slicing up the masses, and I’m glad they made it something that you can do on the fly so easily.

Huh. I guess the Archer class really IS made up of archers. Who would’ve guessed.

After defeating the first boss Servant, we’re given a cutscene where Saber and a Servant of the Caster class — who Saber apparently has history with — have words with one another. Caster introduces what seems to be an exact clone of my player character and informs us that they control half of SE.RA.PH, and we’ll have to fight them for the other half. Oh look, what a convenient way to justify the big army-vs-army battles! Lame plot device or not, it allows me to beat up more guys, so I can’t really complain. After this exposition, we’re returned to the hub, having unlocked the next story mission, a side mission that allowed me to play the same scenario using different Servants (running around as Cu Chulainn and spearing enemies with Gae Bolg was particularly satisfying), and free play for the first level. Again, all fairly standard Warriors-like progression.

Lancer, do you really NEED an Anti-Army Noble Phantasam when all of your moves in this game are Anti-Army anyways?

Overall, I’ve had a great time with Fate/EXTELLA thus far. The presentation is a bit rough around the edges, the story is incredibly confusing (I’m only really understanding bits since I’m familiar with the universe — I can’t imagine what it must be like playing this game with no context at all), and of course, Warriors-type gameplay can get repetitive and rarely is anything new done to shake up the general formula. However, the game provides plenty of ways to break up the monotony of the basic combat, and even if I need to take a break between sessions, I still have a blast just feeling like an overpowered one-man-army and defeating scores of enemies at a time. At the very least, it will tide me over until the more polished Fire Emblem Warriors arrives later this year.

Though it definitely has a few kinks and its story will confuse anyone not familiar with the Fate universe, Fate/EXTELLA: The Umbral Star is a competent Dynasty Warriors-style slash-em-up featuring cool characters and abilities, and it’s as entertaining as always.

Noah McGuire is a senior at the University of Michigan - Dearborn, currently studying Journalism and Screen Studies, with a minor in Game Design. His earliest memories of gaming com from the family sitting around the TV watching his father play Donkey Kong 64, and he one days hopes to be a part of making games that provide more people with those fond memories. An avid Legend of Zelda, Overwatch, and Dark Souls fanatic, along with enjoying weekly sessions of Dungeons and Dragons and the occasional game of Twilight Imperium, he'll always shoot straight on his opinions -- even if it'll land a bullseye on the "incredibly blunt" target.
Related Articles: Fate/Extella
Share
Tweet
Share
Submit