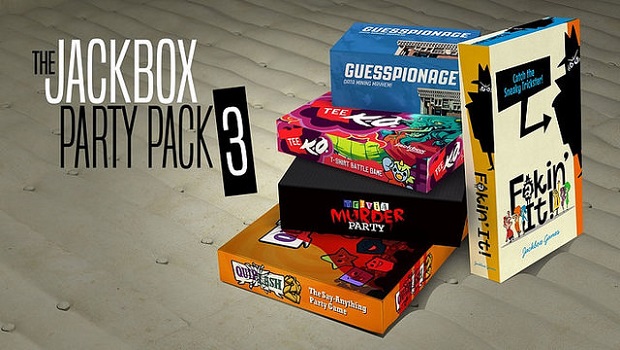 It’s so interesting to see how multiplayer friendly the Switch is with its library. Though still in its infancy, we’ve come to enjoy exclusives from Snipperclips to 1-2 Switch, and that’s not even considering Mario Kart 8 Deluxe on the way. A few months after its 2016 release, Jackbox Games delivers The Jackbox Party Pack 3, a collection of five party titles that will make your Nintendo Switch the life of the party (no thanks to Karen). While mostly unchanged from its original release, the Switch version is a great way to get a portable game going if you have a group of friends willing to party it up.

Perhaps the greatest thing about The Jackbox Party Pack is the accessibility of the package. In lieu of controllers, the game requires each player to have a smartphone or tablet to play, and while it seems like a daunting requirement, it was actually easier to round up eight phones than controllers were (and with Joy-Cons retailing at $80 a pair, it was a cost-effective method to use a gadget my friends already had). Additionally, the portability of the Nintendo Switch means you can use it anywhere you can get an internet connection. It really takes the “party in your pocket” mentality a little too literally, and it’s all the better for it.

Once the Switch connects to the internet, you can select either Quiplash 2, Trivia Murder Party, Guesspionage, Fakin’ It, or Tee K.O. from the menu. Up to eight players can play in a game room (except for Fakin’ It, which has a maximum of six). Joining a game is as easy as entering a code on your phone browser to enter a room, with audience options available for more people to play along in spectator roles. Internet streaming is encouraged, and there are options to make the game family-friendly if you so choose. It’s also neat that all of the vital information that each player needs to play the game is transmitted straight to their phone, so you don’t have to squint at the big screen too much.

Fun fact: Referencing r/meirl memes will get you the win fifty percent of the time.

As for the games themselves, they’re all a pretty eclectic bunch. Quiplash 2, a sequel to a game included on an earlier iteration of the Jackbox Party Pack, has players completing answers on their phones, which can range from “fill in the blank” type questions to “something that someone would say in this situation” type deals. Trivia Murder Party has players act out a simulated horror movie, full of multiple choice trivia questions and some sadistic games for those who lose. Guesspionage tasks players with predicting percentages that people do an activity (such as people who learned about sex from their parents), Fakin’ It deals with players getting directions for an activity except for one person, and the group has to deduce who is the faker, while Tee K.O. tasks players with making t-shirts for each other. While all of these titles are enjoyable by themselves, not all games are created equal.

The two standout games from this package are Quiplash 2 and Trivia Murder Party, as they’re the easiest to understand and involve the most players as well. Quiplash 2, technically the third Quiplash title in the Jackbox series, has players filling out answers to various questions. These questionnaires range anywhere from “How you can spot a counterfeit Rolex” to “A fact you couldn’t believe was on a Snapple cap.” They’re a great mix of pop culture and humor that are complemented by the creative answers the players give. After everyone’s given answers, the game pits two answers together while the rest of the players vote on who has the better answer, with more points awarded to more popular answers.

So what universe does the “Shrek is Love, Shrek is Life” video lose to “”All Star” by Smashmouth but every word is someBODY”? A sad one, that’s what.

While the game is simple in practice, it can easily get into some awkwardly hilarious situations if your group is in the mood for it. (My main group of players was a bunch of guys at a bachelor’s party for my bestie’s wedding, so you could imagine the answers we came up with.) Quiplash 2 is probably the best game to play with passerby (especially if you’re streaming it to your followers), since they can vote for the best quips and even submit their own if you allow it in the settings. If you can’t think of an answer, there’s a safety option where you can let the computer answer for you, but it’ll only earn you half the points (not to mention it’ll be pretty tame by comparison). Think of it as an open-ended Apples to Apples (or Card Against Humanity if you’re so inclined).

Trivia Murder Party, on the other hand, is more than a standard trivia game. Framed as a horror movie, players compete against each other in a game that’s reminiscent of slasher movies, with a villainous voiceover that’s equal parts cheesy and terrifying. By answering multiple choice trivia questions correctly, you can move to the next round. However, those that fail will have to play sadistic minigames in order to survive, and more often than not, one person will go down each round. Once one person remains, everyone makes a mad dash to the exit, where those who have perished can take control of the leader’s position and leave by answering questions correctly. It’s a fun little title that is the most entertaining yet most uneven experience. The announcer, while charming and funny at times, can also be long-winded with his delivery (not helped by the fact that the game’s scenery can be absolutely horrific with a brief jumpscare here and there). While the voice work is, for the most part, spot-on, the announcer here is hit-or-miss.

It’s still hard to believe that the Simpsons has been airing for the whole time I’ve been alive, and then some.

While this is probably the most mature of the games in terms of content (there is no family-friendly option here, for one), it’s oddly the most versatile of the group. Audience members can play along by answering trivia questions correctly and can even die or live with the winner based on how much in-game money they earn from answering, so it adds a bit of playful immersion to the experience. It’s also the only game that can be played solo (but good luck trying to get out alive), which makes for a nice few minutes while you’re waiting for guests to arrive. Since trivia is less about group participation and more about knowing the answers, it can be played with one person to the maximum of eight (plus more audience members) with relative ease. This game worked well with groups of all numbers, which is why it’s the best of the bunch.

Alright, people with SOs, WHO DOES THIS? Asking for a friend, and that friend is me.

The last three games in the package are where the Jackbox Party Pack seems to be a bit inconsistent with delivery. Tee K.O. is geared towards the artsy crowd, as its Japanese kawaii aesthetic masks the challenge to create shirts based on whatever you might think up. This is perhaps the most open game in terms of creativity, which can be a good or bad thing depending on how artistic your guests are. The color options are limited, and you’ll only be drawing on a small phone (or tablet) screen, so don’t expect any masterpieces in this round. However, the other part of this game involves making slogans to go with shirts, which contributes to the creativity aspect of the game. It feels like Quiplash, but unfortunately is a bit inferior due to the fact that the chance element means that you’re not necessarily going to get your shirt and slogan, as they’re randomly distributed to others when the round is over. You’re at the mercy of your opponents with this one, which can feel a bit unfair at times. One of the guys in my group was really talented with his shirt designing skills, which was unfortunate when he got one of my shirts that was literally just a stick figure. Once everyone picks their shirt and slogan, they have to vote on which shirt will win. Again, it feels like Quiplash due to the voting mechanic, but this time around you can vote for your own answer. Tee K.O. is a neat and quirky addition (especially the art style for the game, which has cute oozing out of every corner of the screen), but can be a bit faulty if everyone isn’t feeling it.

While the other two games aren’t too bad by themselves, Guesspionage feels like the weakest title due to the premise of the game and Fakin’ It relies too much on subjective emotions, which ends up making the experience less than stellar. They also aren’t as entertaining with fewer people, as the point of both titles (taking surveys and sniffing out a liar, respectively), is less fun when you’re only dealing with three or four people playing. It seems like they’re filler more than substantial additions, if anything.

Sorry to end on such a bland picture, but if it makes you feel any better, my face was one of the “tongue out, licked lips” variety.

However, if there’s one thing that remained consistently great with the Jackbox Party Pack 3, it was the unique presentation of each title. While the content of each was varied in substance, the styles were unique and memorable. From the gibberish-spouting creatures in Quiplash 2 to the spy thriller theme of Guesspionage, all five titles were filled to the brim with energy and wit. Each game is a unique experience, and all have to be played at least once when you bring the game out for a party.

The Nintendo Switch is steadily increasing its plethora of party games, and The Jackbox Party Pack 3 is a perfect addition to zany multiplayer experiences. With five unique titles from which to choose, its charming presentation and hilarious challenges more than make up for its sometimes uneven mechanics. You’ll be screaming all night… in laughter, of course.

Elisha Deogracias is an aspiring accountant by day, freelance writer by night. Before writing for Gaming Trend, he had a small gig on the now defunct Examiner. When not being a third wheel with his best friends on dates or yearning for some closure on Pushing Daisies, he's busy catching up on shonen manga and wacky rhythm games. Mains R.O.B. in Smash. Still doesn't know if he's a kid or a squid.
Related Articles: Jackbox Party Pack 3
Share
Tweet
Share
Submit