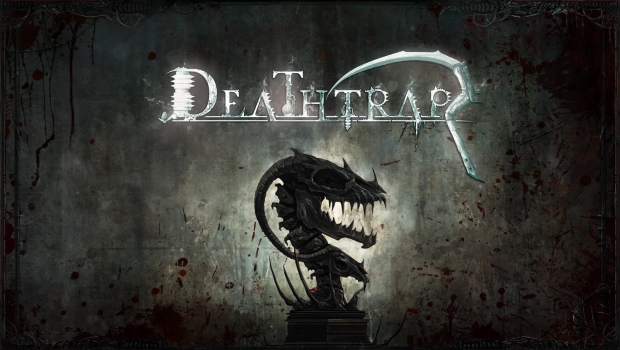 When I was a kid, Diablo II was a daily practice for me. I’ve been out of ARPGs for a while because the genre had just grown stale to me. I wasn’t being entertained by their mindless point-and-click style of play anymore, and as much as I loved getting sweet loot and getting really strong through killing weird monsters, it didn’t feel worth it. Across my desk comes a new game that takes very clear inspiration from Diablo, but with a unique novel twist.

Deathtrap combines elements of ARPGs like Diablo with that of Tower Defense games. As you might expect, your job is to block large mobs of monsters from reaching “gates”. If you let too many monsters through, then you lose. The moment to moment gameplay here is entertaining, and when I started playing I was having plenty of fun. The tower defense mechanics are well executed, the game feels smooth to play, and leaving a pool of monster blood on the ground is satisfying.

But the more I played, the more problems started to emerge.

The campaign is short, maybe 6 hours or less depending on how fast you push through and how many stars you want for each stage. Developer Neocore tries to introduce some nice lore into the activities you perform during this time, but it’s mostly thrown to the wayside and the story doesn’t get explored very much except through text explaining the context of each map you visit. The world here seems like it has potential, but it’s never taken anywhere.  It just feels very average and it’s not something I paid attention to.

There’s also some voice acting, but the contextual voices quickly start repeating with very limited variety – a problem that is a common weakness in Deathtrap. The stages themselves look varied, but in general the practice of completing each one of them is exactly the same. There are attempts at introducing gameplay elements to spice up the process, but overall they fall flat, especially because I never felt the need to experiment by upgrading different trap types or try out different abilities.

It certainly makes you feel like you have plenty of options. There are several different traps and three different classes, but play this game for a lengthy amount of time and you’ll quickly see that there’s no real reason to try them all out. Playing each class feels roughly the same, except for when you play the mercenary who fights at melee range. The problem with the mercenary is that it makes the game exceptionally easy, and I barely had to use health potions to survive when playing as him.

Even when I experimented with the other classes, I still barely ever faced actual risk of death. There are some places where the game gets challenging, but overall the game is not very difficult. I ran most of the stages on hard and barely ever felt challenged. The ranged classes both felt like playing the relatively same style, and there are no exceptionally inventive abilities to spice up combat.

Deathtrap also lacks a feeling of strategy. You can place traps for sure — it’s how tower defense games work, after all — but there is a lack of meaningful decisions when it comes to positioning them or selecting which to place. The problem here is that you can only put them in per-determined locations, meaning that there’s no reason to experiment with strategy by moving the traps around and placing them in different spots to better handle large enemy groups. This is only worsened by the relatively small and unimaginative map designs, with few paths for the enemies to funnel down and few alternative methods for you to handle the monsters.

The boring progression led to me maxing upgrades into only one trap type… mechanical turrets.

“Unimaginitive” happens to be a great word to describe this game. Not only are there plenty of options that end up being mostly meaningless, or even discouraged, because putting all your upgrade points into specific traps and skills is better than spreading them out, but the graphics are lifeless and the maps lack any sort of personality. They certainly look nice enough for a twenty dollar downloadable title, but they don’t have anything to make them stand out. This lack of imagination seeps into everything, the progression is boring, and every map feels exactly the same as the last despite the different environments. Even the store is a lifeless interface, and the games generic soundtrack gets old quickly.

Usually games like this tend to become more fun while playing online, but that isn’t entirely the case here. It’s a little fun to jump on and play with your friends, but the poor interface design for the online side of the game, and the personally finicky matchmaking experience I had means even groups will probably quickly move on to better team-based games that encourage cooperation. The co-op here doesn’t make you act like a team, it just felt like I was playing the same game with other people moving about and placing traps.

Now all of this isn’t to say the game is completely without merits. The gameplay is quite fun and the monsters leave behind satisfying, bloody messes. There are plenty of different traps to try with different damage types to account for and an in-depth editor that has the potential to put out some well-done user generated content. Killing monsters and collecting loot is still a satisfying experience, it’s just that Deathtrap has such a novel concept but doesn’t take it anywhere exceptionally interesting.

Deathtrap is a fun monster-killing, loot collecting, distraction. Unfortunately, it never goes beyond that. The lack of imagination in almost every facet holds this game from being as good as it could've been. It's still worth it's price tag, but little more.

My name is Niko, I'm currently 20 years old. I spend most of my time on my computer gaming as I got hooked on videos games from a young age. While my first experience with video games was with the Gameboy Color, I first got seriously into games while using the original Dreamcast and the PlayStation 1. I played many games back then, but the highlights were definitely Pitfall 3D, Pokemon Blue, Rayman 2, and Ecco the Dolphin Defender of the Future. All games that I spent many many hours on and filled the long hours where I stayed at home mostly by myself thanks to living in unsavory neighborhoods. From then on, I pursued a lot of video game consoles. I was particularly enthralled with the Super Nintendo and Nintendo 64. As I grew up further, my tastes shifted and I tried more and more games, especially after I got a PC. My first experience with a PC RPG was Star Wars Knights of the Old Republic, and it was really the game that made games an integral part of my life. I played video games a lot back then, but ever since playing KOTOR I've been a lot more opinionated and interested in games. I even entertained the idea of wanting to be a developer at multiple points, but I just didn't have the skillset. Still, KOTOR ignited my interest in video games as a way of telling stories. I loved the ways video games could tell such large and complex stories, combining the best parts of every other medium of entertainment with the unique pieces of what video games themselves offered. Now, my favorite genre is definitely RPG's. With my primary interest being the story driven ones. Though, I still enjoy my occasional shooter and action titles I enjoy mostly great cinematic titles with good stories. Though I also enjoy the Stealth, Strategy, and Action-Adventure genres quite a bit. I also think that the PC is a wildly superior platform to any console, due to the wide variety of options. Whether it be in graphics, mods, or the selection of games themselves.
Related Articles: Deathtrap
Share
Tweet
Share
Submit