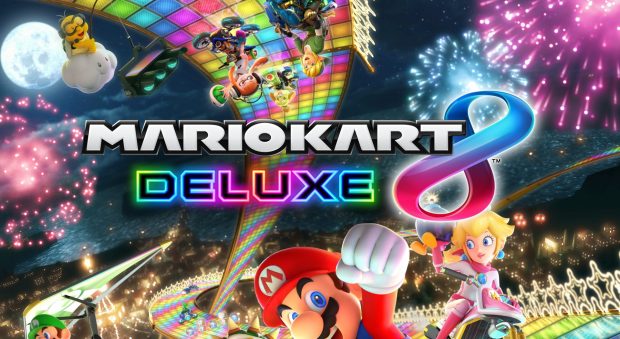 The very first time I booted up Mario Kart 8 Deluxe, I made it halfway through my first lap before being interrupted by a screaming baby in my house. My infant son was hungry, so I undocked my Nintendo Switch and took it with me to my rocking chair as I fed him. The moment he fell asleep, I turned my Switch back on and was able to continue right where I left off, without so much as a hiccup. I also got hit with a red shell ten feet before the finish line. That’s the magic of Mario Kart 8 Deluxe – not only is it frantic fun and an incredible package, it’s the best example of the novelty of Nintendo’s console/handheld hybrid to date.

When we reviewed the original Mario Kart 8 in 2014, we praised how well it played but felt that it played a little too safe. Here’s what we said then:

“Mario Kart 8 is a solid racing game, and it’s hands-down the best in the series as it builds off of years of slight improvements. But other than its fluidity, graphical prowess and minute additions, it clings to those tried-and-true modes and options without making any real drive forward.”

Most of this still rings true. You won’t find any drastic changes in this repackaging of the Wii U original. What you do get, though, is a fantastic kart racer that’s bursting with content and adds a few new bells and whistles for good measure.

It all plays wonderfully too. Every mode feels just as fine-tuned on Switch as it did on Wii U. The same stunning, colorful environments pop whether played in handheld or TV mode, and it all runs at a buttery smooth 60 frames per second (with the exception of a drop to 30 during local multiplayer matches). This all makes great use of the hybrid functionality of Nintendo Switch. While Mario Kart’s bite-sized play sessions are perfectly suited for the console’s portability, the ability to dock and play on TV goes hand-in-hand with Mario Kart’s party game nature. Add in the fact that Switch has two removable Joy-cons and Mario Kart 8 Deluxe becomes an ideal candidate for portable multiplayer parties.

Mario Kart 8 Deluxe includes all content from the original release, as well as every piece of DLC. That means you’ll be able to choose from a huge roster of 42 racers, including five new racers like King Boo and the Inkling kids from Splatoon, all across 48 inspired tracks. The Deluxe version also brings back two returning items: the Boo, which lets you steal items from other racers, and the feather, which lets you hop over other racers and dodge enemy fire. All of this content is thankfully unlocked right from the beginning (except for the odd exclusion of kart customizations, which need to be earned) meaning that you can play all of your favorite racers and tracks right from the start.

My favorite new feature is the ability to hold two items at once. Not seen in this franchise since GameCube’s Mario Kart: Double Dash, being able to hold a pair of items simultaneously opens up some great new strategy options. There’s a certain comfort in knowing that once you hit the opponent in front of you with a red shell, you still have the protection of the banana peel you’ve stockpiled. While I wish you could switch between your two items at will, the ability to have both brings a new layer of excitement to competition.

The real star of Mario Kart 8 Deluxe is its revamped Battle mode. Unlike the Battle mode seen in the Wii U version, which simply reused existing race tracks instead of dedicated battle arenas, the Switch version boasts eight courses designed specifically for this mode. New courses like Urchin Underpass (another Splatoon cameo) join returning classics like GameCube’s Luigi’s Mansion to create a roster of close-quarters maps that excel in competitive matches.

Five exciting match types help to bring variation to battling too. Balloon Battle and Bob-omb Blast both task you with popping enemy players balloons, Coin Runners has you accumulate as many coins as possible before time is up, and Shine Thief is a hectic and stressful game type in which you try to hold onto the gold Shine for a total of 30 seconds without it being stolen by enemy players. The real standout, though, comes from Renegade Roundup, a new cops-vs-robbers style match where one team gains points by capturing members of the other team. The fleeing team then earns points for every teammate they break out of prison. Each Battle mode game type is a ton of fun and can be played in both local and online multiplayer, adding even more value to an already-packed game.

One new feature that does stand out as strange is the implementation of drive assist. This helps keep your kart centered on the road at all times and is a great way for keeping things interesting and competitive for novice players. However, Mario Kart 8 Deluxe has the strange habit of turning it on by default. It can be turned off easily from the pause menu and will stay off until manually switched back on, but the seeming insistence that more players would want it on than off seems a little off. It’s a nice feature to have, just a strange way of introducing it.

Mario Kart 8 Deluxe is an all-around fantastic package that feels right at home on Nintendo Switch. Additions like new items and playable characters, the ability to hold two items at once, and drive assist help make an already-impressive racer even sweeter. The reworked Battle mode is loads of fun and helps make Mario Kart 8 Deluxe the best multiplayer experience on the new console so far. Owners of the Wii U version may still find a lack of innovative new ideas, but for those who missed out on this racer’s first lap, or those willing to double dip, Mario Kart 8 Deluxe plays exceptionally well, all while boasting a ton of content that will keep you entertained for a long time.

Mario Kart 8 Deluxe plays exceptionally well and its pick-up-and-play nature feels right at home on Nintendo Switch. There may not be any game-changing additions, but new items and characters, as well as an insanely fun Battle mode, help round out an already-impressive package.

Gaming Trend's resident amiibo collector, Matt's a lifelong gamer with a soft spot for Nintendo. As a new father, Matt often struggles to stay as involved as he has been in years past but can always be counted on to come back for some engaging geeky conversations. A resident of Philadelphia, he is currently working on building up his Man Cave with all things Marvel, Star Wars, and Video Games. As an old-school gamer, Matt firmly stands by his belief that gameplay will always be more appealing than story.
Related Articles: Mario Kart 8 Deluxe
Share
Tweet
Share
Submit