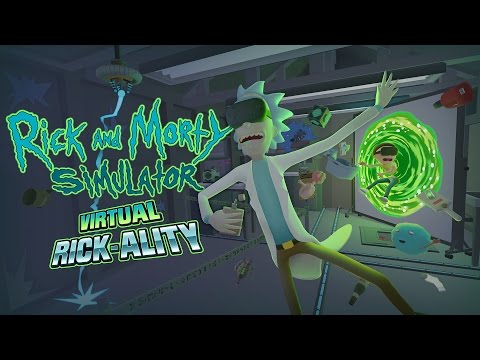 I’d never watched an episode of Rick and Morty. There’s a dearth of shows and a plethora of games always demanding my attention, so I just never got around to it. I asked one of my neighbors to drop in and help with the review as she’s seen every episode at least twice and is a huge fan.

After watching the two hour run time of Rick and Morty: Virtual Rick-Ality, it seems like Rick and Morty is exactly the sort of irreverent jackassery I just might enjoy.

You are a stupid Morty clone. Sorry.

Developer Owlchemy Labs (makers of Job Simulator – you can read our review here) takes another at-bat for the creation of a virtual playground with Rick and Morty: Virtual Rick-Ality. Voiced by series creator Justin Roiland (Earl of Lemongrab from Adventuretime, Radical Rick from Pig Goat Banana Cricket) and veteran actor Chris Parnell (Cyril Figgis from Archer, Geoffrey Hoytsman in Brooklyn Nine-Nine, and Dr. Leo Spaceman from 30 Rock just to name a few) handle the heavy lifting, combining those efforts with the well-honed and accessible playspace that Owlchemy is known for.

At it’s core, Rick and Morty: Virtual Rick-Ality is pure fanservice wrapped in one of the largest roomscale VR games I’ve played. Unlike many free-movement games, but very similar to Job Simulator, R&M has pre-designated positions to teleport to where you can interact with the deluge of show-related objects on display here. A wobbly plumbus, some brief appearances from Summer, Jerry and Beth, Mr. Meeseeks (in the VR world they are Mr. Youseeks), and a hilarious Speak and Spell are some highlights, but nearly everything you touch is a direct reference to the show. There’s even a few new things to find, and a handful of comics to seek out. You’ll even get your hands on a few megaseeds — I’d suggest washing those hands afterwards.

Oh, and Morty is vegan now. It’s 100% canon. It happened in the game and Morty emphatically declares it so. So… that’s a thing now.

Gameplay consists of picking up and lightly interacting with objects to solve puzzles. There’s no inventory, so you’ll often find yourself holding something in one hand and then using the other to teleport to where you’ll use it. As an example, having to fix Rick’s car requires charging a battery, carefully transporting some explosive nitrous, and acquiring the aforementioned megaseed. Finding all three of those objects, charging the battery (see the Simon-like action below), and placing the seed in the car, you face to face with one of the few real challenging logic puzzles to fix some fuses which are also in need of repair. There’s not a lot of difficulty here, and it is all very linear, but none of that stops it from being fun.

If I had a complaint, other than the length of the game, it’s replayability and bugs. At the end, even Rick and Morty make fun of the limited replayability, halfway pawning it off on a handful of collectables and repeating the minigames.

We did encounter several bugs throughout the game. While a few of them could have been show stoppers, we were able to lean through the environment to find objects that had fallen through the walls, using Mr. Youseeks to carefully pass them around the front of the garage. Similarly, we had a tape which somehow ended up outside, and our efforts to retrieve it only resulted in it getting stuck on the roof where it was forever out of reach. That’s just frustrating for completionists.

It’s easy to recommend Owlchemy’s own Job Simulator as a fantastic way to demo VR, and the amount of times I’ve done exactly that has justified the price. Rick and Morty: Virtual Rick-Ality, on the other hand, is a tough ask at the $29.99 launch price. People who haven’t watched the show would be lost in the inside humor, which makes this game a bit of a niche within a niche.

There’s absolutely nothing new to push Virtual Reality and roomspace VR forward in Rick and Morty: Virtual Rick-Ality, and it is painfully short with little replay value. Those indictments aside, it’s a must-have for anyone who enjoys the dark humor of the show. Perhaps we can Get Schwifty with another run at VR with a longer run time and harder puzzles in the future.

Ron Burke is the Editor in Chief for Gaming Trend. Currently living in Fort Worth, Texas, Ron is an old-school gamer who enjoys CRPGs, action/adventure, platformers, music games, and has recently gotten into tabletop gaming. Ron is also a fourth degree black belt, with a Master's rank in Matsumura Seito Shōrin-ryū, Moo Duk Kwan Tang Soo Do, Universal Tang Soo Do Alliance, and International Tang Soo Do Federation. He also holds ranks in several other styles in his search to be a well-rounded fighter. Ron has been married to Gaming Trend Editor, Laura Burke, for 21 years. They have three dogs - Pazuzu (Irish Terrier), Atë, and Calliope (both Australian Kelpie/Pit Bull mixes).
Related Articles: Rick and Morty: Virtual Rick-Ality
Share
Tweet
Share
Submit