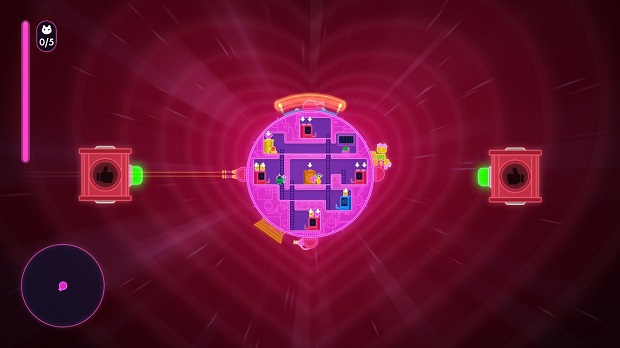 As a gamer in a relationship with a gamer, I’m always on the lookout for excellent co-op games. Some inspire good-natured competition, some require a high level of coordination, and some are best forgotten because they don’t feel rewarding for either player.

Lovers in a Dangerous Spacetime is all about coordination, and it definitely feels like it was built for co-op play. Sure, there’s a single player mode available, which gives you a CPU companion, but you have to direct their actions to a certain extent as well. At some point, it gets too complicated to keep track of two characters at once.

See that itty bitty kitty? It may be cute, but it’s up to you to control it.

The premise of this game is that a ship was constructed that would harness the power of love. It was named the Ardor Reactor, and it helped a bunch of happy little animals and aliens travel through space. Then one day it was infected with anti-love and broken apart, so your mission becomes finding all of the pieces to put it back together. Yes, this is probably one of the most cheesy stories imaginable, but it’s told in a way that you can’t help but like, even if it’s in spite of yourself.

To retrieve the Ardor Reactor pieces, you’re given your own small ship. Because this game is in 2D, you’re shown a cross section of your ship, which has 4 mounted guns, one moving gun, a shield, a map, and a captain’s wheel. With several stations to man and only two players, much of your time is spent scrambling around, attending to whatever is most pressing. In single player mode, this feels like a nightmare, but it becomes chaotic fun when played with a partner.

As you go along, you’re able to find or earn upgrades to your ship. You’re given a fair bit of flexibility with what you beef up, because the gems you discover while zooming through space can be installed in any station you choose. Make your shield stronger, shoot lasers instead of single bullets, or attach a swinging mace to one of your guns – you’ve got tons of options! Then after you complete levels, based on how well you performed, you can buy additional upgrades. These powerups match with the increasing difficulty of each level pretty well.

Modify your engine so it can become a weapon as well. That way, whoever’s driving can get in on the action.

To jump from one level to the next, you must locate and unlock a heart-shaped wormhole. You can only unlock this wormhole by rescuing at least 5 animal friends from throughout the level. If you feel like taking the time to comb through the entire map and save more friends, you’re rewarded by a higher ranking and better upgrades. You may also find a greater number of gems for your ship. Just keep in mind, more time exploring comes with the risk of damaging the ship and possibly failing the level.

Every few levels, there’s a boss battle. Defeating the boss will take you to the next set of levels. Each set of levels has a different environment where you can discover a variety of enemies. The changing scenery, layouts, monster types, and bosses keep the game feeling fresh instead of repetitive.

Everything about this game is absolutely charming. The sprites are adorable, and the sound design suits them impeccably. The upbeat, electronic soundtrack provides fitting background music as you traverse through the stars. Sure, the story isn’t all that deep, but that doesn’t matter much. Lovers in a Dangerous Spacetime was designed to be lighthearted and cute, and it’s a great choice for some frantic but enjoyable couch co-op sessions.

Lovers in a Dangerous Spacetime is a cute, simple game about space travel and the power of love. Though you have the option of flying solo, take the title’s advice and play through this game with a friend for the optimal experience.

Sarah Marchant is an office admin for a nerdy t-shirt company. She has a soft spot for indie games, a passion for story-driven titles, and a weakness for cooking games and anything with zombies.
Related Articles: Lovers in a Dangerous Spacetime
Share
Tweet
Share
Submit