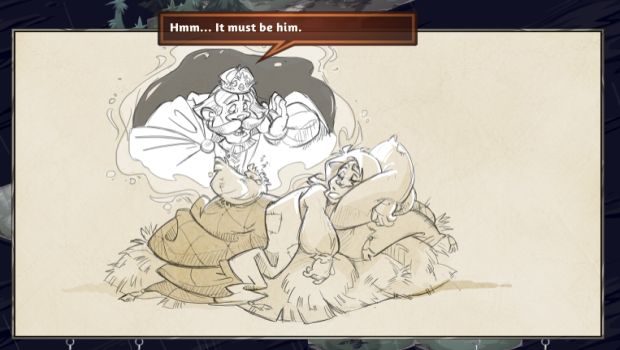 I made a lot of strange and entertaining comparisons during my time with Crowntakers. Among the first was Infinity Blade, where I originally encountered the now popular theme of playing a bloodline of characters who perpetually took up the sword and crusade of their predecessors. Soon afterward (and particularly when I failed) I thought about the old arcade coin gobbler Dragon’s Liar, the first game where I experienced the nose-bleed inducing anger of what is now clearly defined as “rage-quitting”. But it was in between those two extremes, just as a sword is shaped between an anvil and a hammer, that my opinion of this title was forged. I was enjoying Crowntakers and, despite my occasional frustrations, I was having a pretty good time.

In Crowntakers you are playing a character known simply as the “Hero”, who is wrested from a good night’s sleep in his humble home by a telepathic message from his father, the King. The King quickly explains that he is contacting members of his bloodline to come and rescue him from his own castle dungeon where he is being held prisoner in the midst of a coup. In exchange for returning his freedom and thusly bringing peace back to the land, the King offers the Hero riches and power beyond his imagination, which is always a solid motivator.

This is where Crowntakers begins, and there is quite literally not a moment to waste since your every move and choice can lead to drastic results. Each time you begin your journey (and there will be several of those at least, but more on that later) the map is randomly generated, confronting you with different obstacles and benefits. In addition to this, each move across the world map progresses the in-game time a little further ahead, eventually leading into the next day. As each new day arrives, your opponents will grow in strength, stacking the odds more against your character.  This means that from one attempt to the next, that accommodating local town and pocket full of gold you started with your first time, can quickly be replaced with a pack of angry wolves and a spider-filled cave the second. While this can lead to frustration if you’re repeatedly hosed by unfavorable circumstances, it can also make all the difference when things go right and your skills have been honed by a handful of harsh lessons.

For example, let’s say as you travel across the world map and as the charmingly hand-drawn houses, towers and caves of Crowntakers pop into view, you come a across a run-down hut. Since your last battle left you a little low in health, you decide to investigate the hut and select the slide offering you the option to search it for loot. Suddenly your already weakened hero finds himself on the brink of death after being mauled by a nest of poisonous spiders awaiting your approach inside.

On the flip side, during another playthough where every battle has gone splendidly and your hero has continued without a scratch, you come across another hut you decide to search, however this time you find a bounty of abandoned treasures you sell at the next merchant for a fine price. Now, as you journey to the next stage of your adventure, called Steps, you avoid any further huts because you currently have more than you need and possible danger just isn’t worth it.

It’s times like this that Crowntakers reveals it’s about more than just the turn based strategy of its battle system or Disney-esque charm of its setting. Even during the travel segments between combat a player must weigh risk against reward for each of the Hero’s choices, no matter how benign.

The actual combat of Crowntakers really shines, however, when a player realizes it’s less about in the moment tactics but rather the long running strategy of your Hero’s condition. Did you focus on leveling your hero’s health this time around, or their strength? Did you compensate for these choices by hording strength or speed potions, and will you charge ahead to quickly strike the enemy down or let them come to you and slowly whittle them away? There is no one right answer, and because each failed attempt leads to a considerably different scenario your largest opponent in the game will be always be your own strategic flexibility.

The Hero won’t have to face this challenge alone if you don’t want him to though. By stopping at a local inn or tavern, the Hero can hire mercenaries to augment his combat options. These NPC’s level up and have their own unique abilities, just like the Hero. However, they will also need to share in the spoils if they’re to remain viable combat assets, which can grow costly if you move through an area that offers more danger than reward.

Crowntakers only real weakness is in the foundation of its design. Each time your Hero is defeated it is shown he has also been taken prisoner by the forces he intended to thwart, and the King will let him know that his burden will fall to another in line. The game repeats, and your next Hero will start at a higher level than his predecessor, giving him better chances at progressing further and rewarding the player for their efforts. While this can be entertaining, because the randomly generated map can sometimes nail you with nearly impossible circumstances, it can be hard to find the game addicting, which is an element Crowntakers requires for a player to want to go at it again and again. Also, since the version I played dumps you back to the title screen upon defeat as opposed to intermediate “continue” slide, the break in immersion might be enough to make some less stalwart gamers call it a day. This isn’t exactly a flaw. The game plays really well, is colorfully presented, and genuinely fun when the balance of tactical decision making and random opposition falls into balance. However when the conditions slide too far one way or another, it can become a real chore finding a reason to keep slamming your head against the wall.

There is never a lack of gamers who love a good dose of challenging and well-presented gameplay, and to those Crowntakers could be a real find. It’s solid execution, simple but highly diversified play design, and light and colorful environment is welcoming and fun. However sometimes the randomly generated aspects of the game can knock it out of balance, and quickly change a light-hearted strategy experience into a mouse-smashing rage furnace. If you’re the kind of gamer who likes a title that challenges your brain equally to your patience, then Crowntakers just might be for you.

I've been a huge fan and critic of games and movies ever since I had a voice to speak about them. I love power and influence of great storytelling, interactive and otherwise, and now want to be more than just a consumer. My biggest strength in this regard? Almost every time, I'm fair all the time.
Related Articles: Crowntakers
Share
Tweet
Share
Submit