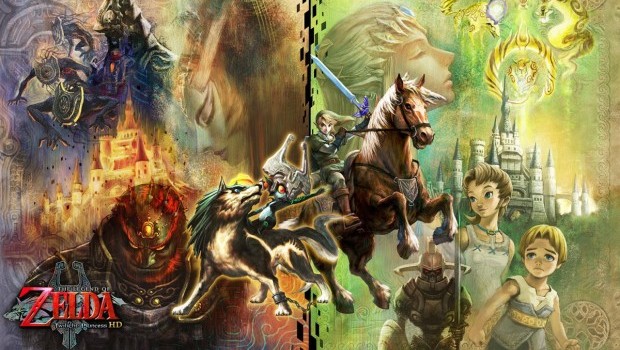 The original Legend of Zelda: Twilight Princess is very much a product of its time. Created with an art style designed to look gritty and mature after early fan backlash of Wind Waker’s bright and “kiddie” presentation, and with each foot loosely planted between two console generations, Twilight Princess often felt like a game with an identity crisis.

The Legend of Zelda: Twilight Princess HD thankfully does not share that same disjointed feeling. This HD revisit feels like a streamlined experience that retains what worked well the first time, while making a few gameplay tweaks for good measure and giving this gripping quest a more defined sense of personality. Twilight Princess HD’s graphical overhaul and new features are unfortunately a mixed bag, but excellent gameplay still makes this adventure a fantastic one.

Most of The Legend of Zelda: Twilight Princess HD feels exactly as it did a decade ago. After an attack on his village results in a group of children being kidnapped, Link sets off on a rescue mission. However, the situation escalates after learning of evil forces invading from a world of shadow known as the Twilight Realm. Traveling to the Twilight Realm transforms Link into a wolf, and players must learn to master both of the hero’s forms in order to solve puzzles and save the world over the course of the 30+ hour quest.

Twilight Princess HD’s visual enhancements are perhaps its biggest selling point, but disappointingly don’t impress as well as they should. Unlike 2013’s Wind Waker HD whose brighter and deeper colors gave it a timeless quality that looked stunning in the jump to Wii U, Twilight Princess’ dry and washed out art style doesn’t lend itself nearly as well to jaw-dropping improvement. While character models do succeed at looking better than ever, many environmental objects feel as though little-to-no visual touch-up has been applied. Blades of grass appear as flat chunks that don’t sway independently, for example, while mountains in the distance still look jagged and undetailed. The visuals do look prettier than they ever have, but compared to some of the gorgeous 1080p games we’ve seen before on Wii U, Twilight Princess HD unfortunately feels more like a half measure than a full-blown overhaul.

Compounding the underwhelming visuals are hiccups that occur during some of Twilight Princess HD’s speedier moments. Whether traversing Hyrule Field on horseback or exploring a shadowy dungeon, it is common to see several splotches of grainy blur on certain areas of the screen. These muddled visuals occur most frequently during moments of quick movement, but are consistent and immediately noticeable when they do. In addition, rotating the camera at high speed during normal gameplay is also cause for visual blur. In a particularly odd issue, even stationary objects on the game’s HUD, such as the minimap and items displayed in the corners of the screen, are prone to bleeding out of place in moments of rapid camera movement. Twilight Princess HD’s 60fps framerate does look fluid and impressive during slower gameplay, but are messy and distracting when the action heats up.

Thankfully, the visual limitations are more than made up for by excellent gameplay that feels even better defined than the original release. Twilight Princess always seemed to lack a certain sense of identity when it debuted near-simultaneously across two different consoles in 2006. Mirrored maps built around a right-handed Link and gameplay made to suit shoehorned motion controls are a few of the accommodations of the original that no longer feel as subtly obtrusive as they once did. Twilight Princess HD feels like an adventure crafted with its own console in mind, and the experience feels better than it ever has due to a greater sense of self.

The visuals are generally inconsistent.

Twilight Princess HD also boasts some exemplary game design that stands the test of time remarkably well. Hyrule’s sprawling landscapes and colorful citizens are brimming with personality, so much so that even the game’s lighter moments are immensely charming. Perhaps most importantly, though, is how intelligently the puzzles are crafted. Walking up walls using magnetic Iron Boots, manipulating windmills with the wind-powered Gale Boomerang, and hanging from ceilings with the Clawshot are just a few of the brilliant puzzle mechanics littered throughout the epic campaign’s memorable levels. Twilight Princess HD features masterfully crafted dungeons that are among the best in the entire series and are just as clever today as they were a decade ago.

As fantastic as the gameplay is, it’s streamlined even further with Wii U GamePad support. Much like Wind Waker HD before it, Link’s arsenal of gadgets are always a quick drag-and-drop away, while dungeons are also easily navigable thanks to a constant map displayed on the GamePad screen at all times. Weapons like the Bow and Arrow can also be aimed using gyroscopic motion, and unlike the recent 3DS releases of Ocarina of Time and Majora’s Mask, I found myself using this functionality frequently because of how much smoother it feels on a console. Of course, the Wii U Pro Controller is supported as well, for those who want a more traditional Zelda experience, but to do so would be a disservice to how accessible Wii U makes Twilight Princess HD feel.

Another small addition to Twilight Princess HD comes in the form of amiibo support, and while it doesn’t change the game in any significant way, it’s a nifty little inclusion that helps out in a pinch. Tapping a Link, Toon Link, Zelda, or Sheik amiibo to the GamePad can replenish Link’s hearts or arrows on-the-fly. Each of these amiibo figures can be used once per day and admittedly helped me out of a tight situation on more than one occasion. The Ganondorf amiibo is also compatible and will cause Link to take double damage, creating a significant challenge to an already imposing adventure.

Twilight Princess HD’s new piece of content, known as the Cave of Shadows, is accessible using the included Wolf Link amiibo, but is unfortunately only a minor addition. This area can be accessed at any time after a certain point and acts as a series of survival challenges where speed and remaining health are tracked to encourage high scores. Although progress can be stored to the figure, and the challenges grow more difficult the further you progress in the game, I found the Cave of Shadows to feel more like a tacked-on extra rather than a substantial piece of new content. It ultimately feels like a dull and lifeless section of Twilight Princess that feels so revitalized elsewhere.

Even with all of its shortcomings in regards to being a remaster, The Legend of Zelda: Twilight Princess HD remains a phenomenal gameplay experience that feels more focused than ever before, while showing no signs of age. The graphical update is more of a half-step than a full-blown overhaul, and the new Cave of Shadows content is light on substance, but superb puzzle design and a huge amount of personality make this revisit to Hyrule an excellent one. The Legend of Zelda: Twilight Princess HD is a masterclass in game design and the definitive way to play an outstanding classic.

The Legend of Zelda: Twilight Princess HD is a fantastic gameplay experience that shows no signs of age, despite an underwhelming visual upgrade.

Gaming Trend's resident amiibo collector, Matt's a lifelong gamer with a soft spot for Nintendo. As a new father, Matt often struggles to stay as involved as he has been in years past but can always be counted on to come back for some engaging geeky conversations. A resident of Philadelphia, he is currently working on building up his Man Cave with all things Marvel, Star Wars, and Video Games. As an old-school gamer, Matt firmly stands by his belief that gameplay will always be more appealing than story.
Related Articles: The Legend of Zelda: Twilight Princess HD
Share
Tweet
Share
Submit