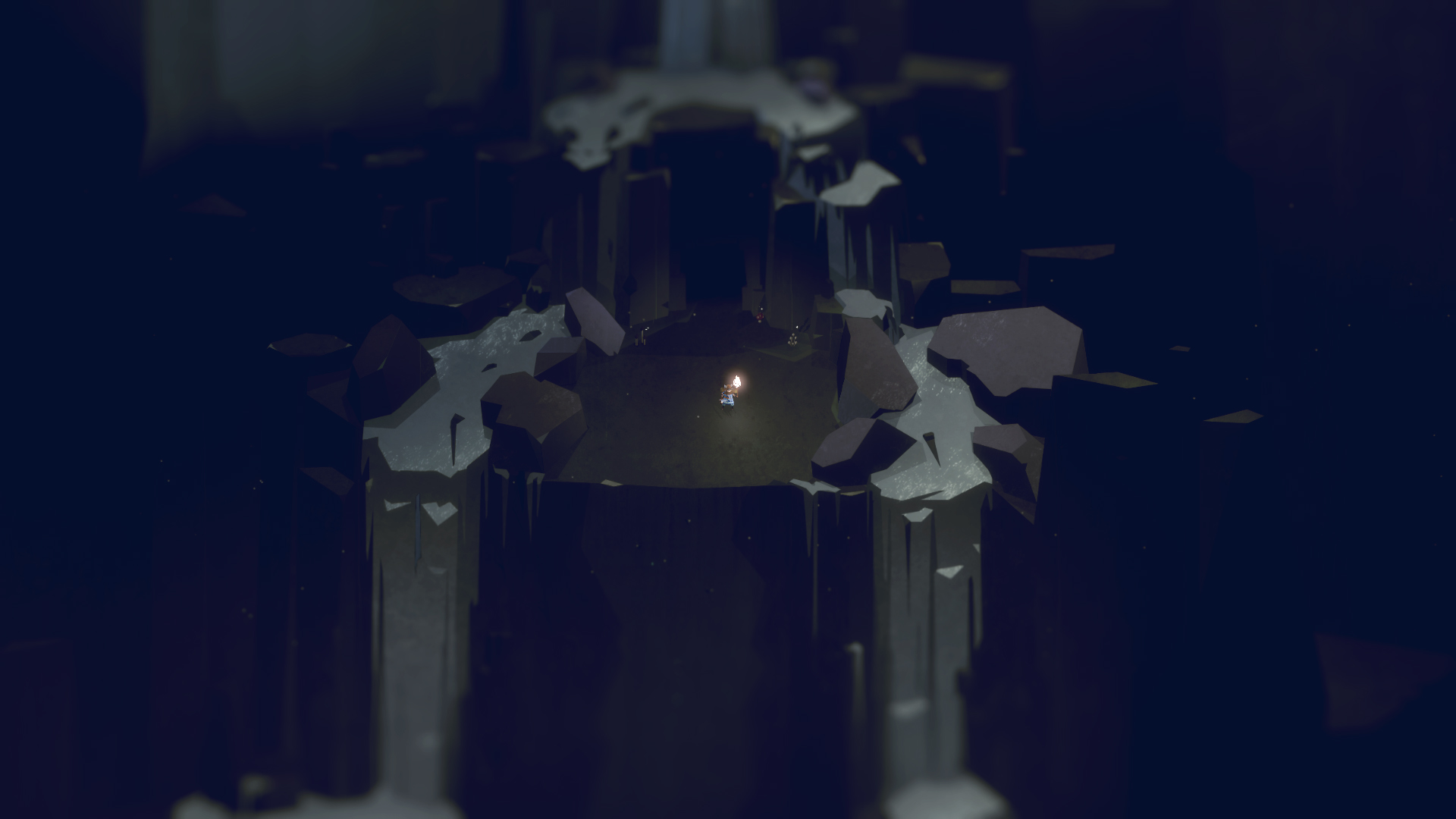 Tis the season for brutal roguelikes, it seems. After a long period of silence since it was announced at E3 2013, I finally got my hands on Below. While we still don’t have a release date (though the developers are hinting that we’ll have an announcement “soon”), I was eager to see the game in motion.

The demo opens on a small figure who has has just tethered their ship to shore. A short walk along the beach and I began my ascent of a sheer mountain face, rain pattering all around. Climbing a staircase, I finally reached the summit and found a clearly man-made entrance. Inside I discovered an extensive staircase, leading far further down than I had climbed up. Where does this mysterious cavern lead, and what untold dangers lie in the ever-encroaching dark?

The start of a long descent

Reaching a small landing, I lit a campfire and sat down and checked out the crafting engine. Crafting in Below is experimental. As I filled my limited bag slots with items like fish, reeds, torches, charcoal, and empty bottles, I began to think through what those items might be used for later. With nothing to craft at the moment, I continued my descent and began the first chapter proper.

Roughly ten steps into this new chapter, I discovered the other purpose for the campfire as spikes pierce through my character, eviscerating him with an ominous blast from the background music. Back at the campfire, I knew I had to be more mindful of where I stepped.

The world of Beyond is persistent. The progress each adventurer makes is “inherited” by their successor. This becomes important because each death leads you back to that very first campfire. Shortcuts and doors opened allow you to bypass playing the same content over and over — an improvement over many roguelikes I’ve played.

Pressing through the darkness, I encountered little shadow creatures with red crystalline arms. These little beasts flitted around the environment trying to flank me, breaking into shards of light. Collecting these light motes, I also gathered things like potatoes, carrots, meat from bats that I’d slain, stones, and moss. The challenge of a limited amount of pack space, and being unsure of what to collect, is very present here.

Light is as critical to survival in Below

Arriving at my next campfire I had more to work with, but I lacked the recipes to craft anything of use. As I experimented, I heard a single tone as I added a reed to the three-part crafting system. Adding a rock, I got a negative tone. Trying again, this time I added a second reed, and then a third. With a congratulatory chime, I had crafted a reed bushel. I’m not sure how it’ll help, but I jammed it back in my backpack for later.

As hunger began to set in, I saw my first glimpse of a heads-up display as a small stomach appeared and began to drain. Up until now, there had been no icons on the screen whatsoever. Similarly, a small droplet of water showed me how thirsty my character was. It didn’t matter too much how much my stomach was rumbling, through — a persistent flock of bats and much larger variants of these crystal beasts harassed me until I dropped. This adventurer would be forgotten to history as no progress was made, but I did learn a few new recipes.

Below’s gameplay is equal parts discovery and simplicity. The clean interface that slowly reveals itself shows a great deal of restraint. As you go deeper into this dungeon, the game gets darker. Light becomes as important as food and water. Similarly, the further you descend, the colder it gets, making temperature management as important as health. And if you are cut, you do indeed bleed — and on a long enough timeline, you will bleed to death. A torch will (painfully) cauterize the wound, preventing the adventurer from bleeding out, but that isn’t the only way. Talking with the developers, they revealed that leech-like creatures will burrow up from the ground and drink the blood you leave behind. You can strike them with your sword once they are swollen with your blood and use their carcass as a sort of disgusting bandaid.

With a few more deaths and a bit more exploration under my belt, I began to quickly prioritize with the knowledge that permanent death meant using each adventurer to accomplish very specific objectives — not everyone is going to survive past those singular uses. From everything I experienced over roughly an hour of play, the game feels as brutal as I’d like it to be, but it never felt unfair. Every time I dug further into the cavern, I did a little better and made it a short distance further.

Combat can be frenetic and brutal

If there was one aspect of Below that stood out over any of its contemporaries, it’d be the ambient sound and unique graphical approach. The tilt-shift style, combined with the depths of shadow, focuses the game. In earlier areas where there are more ambient lighting sources, you can see much further. Moving further below, you begin to feel the claustrophobic pressure of not having a torch or lantern as enemies become larger and more dangerous.

Below was announced in 2013, and it seems like it has taken as long to come out, but from what I saw today, it’s clear they are doing something just a little bit different. With a little polish, and a bit more time, Below is set to ignite that sense of dreadful wonder in all of us.

The world is yours to discover

We’ll keep you posted as we move towards the still-unconfirmed 2016 simultaneous release on Xbox One and Windows 10.