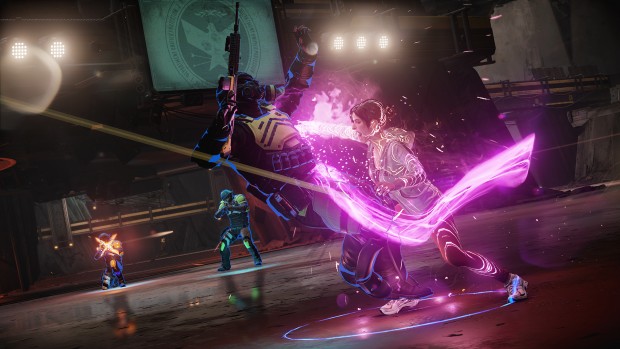 The worst part about Infamous: First Light is that it doesn’t have anything important to say.

It’s a prequel to Spring 2014’s Infamous: Second Son, a pretty decent game in its own right, though it compartmentalized its interesting side characters into each chapter. With First Light, Sucker Punch decided to focus on riot grrrl Fetch (or known by her Christian name Abigail Walker), arguably the most interesting character in Second Son. It’s just a shame, then, that First Light’s story is the weakest part of the game.

Taking place two years before the events of Second Son, First Light follows Fetch’s story—how she ended up in Seattle, her relationship to her brother Brent, and her subsequent downfall as seen in Second Son. Fetch’s story is fine, if a bit predictable. She’s incredibly relatable, and Laura Bailey brings life and humanity to her character. Everything else around Fetch, however, is merely second-rate.

First Light is, ostensibly, a revenge tale. Fetch and her brother Brent have kicked the drug habit, but because of her ability to shoot neon out of her hands, she’s being pursued by anti-Conduit DUP troops. She and her brother are ready to bail on Seattle, but they’ve got one last job to pull off to score some cash. The job goes south (because of course it does) and Brent ends up kidnapped. In order to find him, Fetch has to pull off a series of samey, boring missions for Brent’s old boss Shane. Shane is the worst—I’m not even kidding. His southern drawl and smarmy demeanor constantly sounds like he’s pulling off a hacky version of Matthew McConaughey’s character from Dazed and Confused. Playing through Fetch’s transformation doesn’t feel like the important story it should be; rather, it feels like it’s simply going through the motions.

In between these story beats, the narrative jumps forward to near present day, as Fetch recounts her story to DUP Chief Brooke Augustine. Here, Fetch is a prisoner, and Augustine puts her through a series of time trials to test out her abilities. It’s here that I began wondering what the point of all this was. Yes, you get to play with Infamous’ combat set in a confined environment against a series of holograms, but since the story is so wafer-thin, these series of arena battles seem like that’s all First Light is good for.

Luckily, combat and maneuvering around the world is still a blast. The neon powers in Second Son were clearly the best part of the game, and you have the full range of Fetch’s powers to choose from. Being able to slow time and hone in on each enemy’s weak point one after the other is still just as much a thrill as it ever was, and zipping around Infamous’ version of Seattle is much, much quicker. There are also a handful of challenges to complete (like defeating a certain amount of enemies while in the air), and they help add a bit more variety to how you approach combat.

That said, the city feels more empty than ever. Other than the samey story missions, you’ve got a handful of races to take part in, hidden “lumens” to collect to upgrade your powers, hidden cameras to blow up (they move now!), and neon graffiti. You’ll also only explore the north part of this version of Seattle as well, as the south is completely blocked off. I know it’s supposed to be a smaller, less expensive download compared to the fuller game of Second Son, but First Light just feels lacking.

It’s a shame, really. Fetch is an awesome character, and I was looking forward to getting a chance to explore her story a bit more. But ultimately, First Light offers nothing you haven’t seen before in Second Son with a story that fails to live up to its potential, effectively making it feel like a $15 demo.

Infamous: First Light takes an interesting, flawed character and does nothing with her. Even at $15, it's a vapid, empty, wasted opportunity. At least the combat is still fun, though.