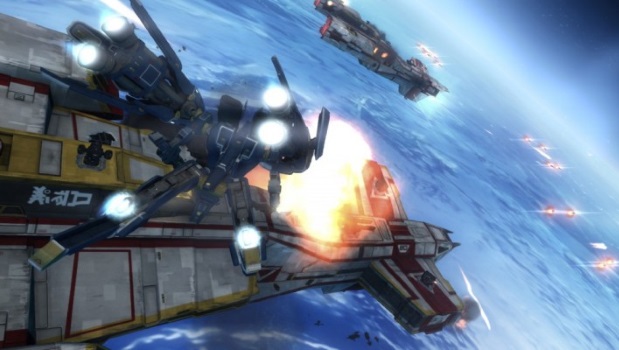 From humble Kickstarter beginnings, Strike Suit Zero has come a long way. Originally available for PC and reviewed by our own David Roberts, it has become the first self-published title on the Xbox One with visual improvements and some added content as the newly released Strike Suit Zero: Directors Cut. As a space-flight combat sim, its nearest competitor in the One’s marketplace is Crimson Dragon – and only by squinting is there any similarity.

[singlepic id=18475 w=620 h=350 float=center]Included in the Directors Cut are the four original ships from the PC version: the Fighter, Bomber, and Interceptor alongside the titular Strike Suit. The update adds two more Strike Suit variants, namely a more agile Raptor and heavyset Marauder. The magic of the Strike Suit class ships is that, when they’ve harvested enough energy (Flux) by defeating enemy craft they can transform into a Gundam-like mech which can move in any direction as well as dash. Flux gets used as ammo while in suit mode, and regardless of which one you’re flying, the weapons and combat abilities are second to none.

In the campaign mode you’ll be taken through a story not dissimilar to Titanfall, whereby colonists have broken off ties with the military forces of Earth known as U.N.E.. As the voiceless pilot Adams, your missions are directed by an “AI with a god complex”. The Directors Cut brings along with it Heroes of the Fleet – five missions where you get to replay key historic battles in the conflict and serve to flesh out the story.

[singlepic id=18477 w=620 h=350 float=center]I struggled for a while with the controls – I got nearly a third of the way through the campaign before I didn’t have to think about them. There are three sets of control variants, none of which worked well for me initially, and I think the delay in getting them to “click” was that I ended up switching back-and-forth. With no controller mapping option, I found myself initially annoyed with some of the selections – there is no option to have thrust and brake occupy LT and RT, for instance. Once I got past the learning curve however, I was pulling off some very impressive combat maneuvers – this is despite the limited settings and having more flexibility would have been a big asset.

And you will need to get good at combat if you want the good ending – each level is rated based on your performance and they contribute to how the game ends. There are three levels of difficulty – a blessing when you’re just learning the ropes, and certainly the hard levels work well for extending gameplay after you’ve managed to upgrade your ships sufficiently to make normal far too easy. I consciously avoided David’s review to not focus on his experience – and Born Ready had definitely taken the right steps to provide better checkpoint placement and difficulty settings, though some missions required later visits to improve my score to unlock ship performance upgrades.

[singlepic id=18479 w=620 h=350 float=center]Sound is about what I’d expect an indie game of this nature to have, and while textures and ship models aren’t great, by no means are they an eyesore either. Furthermore, this was not developed to push the hardware to its limits since it wasn’t originally made for the console, but in the many hours of gameplay I never experienced any graphical issues or slowdowns. Given speed and fluid nature of the space battles within, we would have loved to see Strike Suit Zero play co-operatively over Xbox Live.

The only gripes I have are that the cockpit view offers no real advantage, and sometimes exploding ships can obscure your vision. Jet streams, smoke and explosions match the dogfighting physics: they don’t come across as authentic space combat, but are way more fun than stodgy adherence to reality. I must admit, seeing a volley of swarm missiles chase after your target is extremely satisfying, as is laying waste to Corvettes with a rail gun  from across the battlefield.

Strike Suit Zero: Director's Cut may not be for everyone, and if you suit up expecting a AAA budget game you might be disappointed. Looking past the surface, the combat is surprisingly deep and satisfying once you get the hang of the controls. With unlockables and 18 missions that range from 15-30 minutes each, there is a lot of game for $20 in a genre that has not yet found a foothold in the console market. Reminiscent of Wing Commander: Prophecy, Born Ready scratches an itch for those who love dog-fighting in space, regardless of realism.