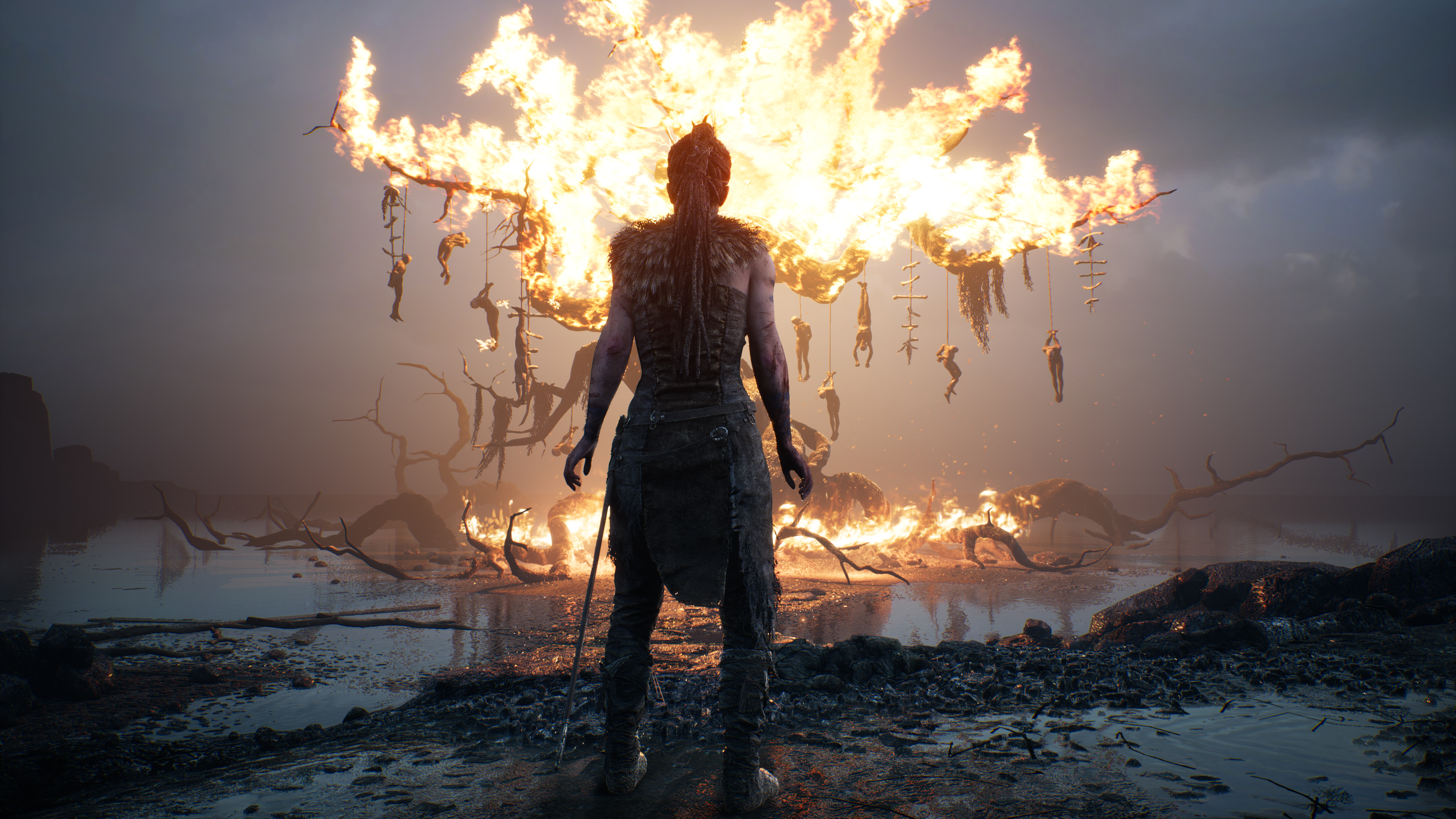 I expect Hellblade: Senua’s Sacrifice will be included in the ongoing games industry discussion — what qualifies as a “game” and what should we label an “interactive experience?” Hellblade’s struggle is that it never commits to either. And while this impasse in some ways diminishes the game’s impact, the final product gives players an unprecedented peek into the “darkness” of psychosis.

In Hellblade, you take on the role of Senua, a warrior on a personal quest through the Norse underworld Helheim, but what makes Hellblade so wonderfully unique is its illustration of psychosis — a mental disorder where one’s emotions are so extreme, a person can disconnect from reality. Senua’s struggle with psychosis — which she refers to as “the darkness” — is what elevates Hellblade from a factory-settings, mythology-based action game to a interactive experience about a very real mental disorder.

While Hellblade’s depictions of mental disorder are the game’s most notable feature, it’s worth noting that Hellblade is an immensely pretty game.

Senua’s psychosis is exhibited in a number of ways in Hellblade, but most profoundly through the game’s binaural audio design. Just as people with psychosis do, players hear combative voices in their head that tease, terrify, validate and discourage Senua throughout her journey. As terrifying as it was to hear these voices during my playthrough — sometimes, I caught myself looking over my shoulder, thinking I’d heard a voice in real life — it was an incredibly thoughtful way to mirror Senua’s condition. This is a game that’s meant to be played with headphones or surround sound, though. The audio effects just aren’t as powerful sans binaural output.

Admittedly, most of Hellblade feels like a psychosis-themed walking simulator. You’ll find runes in the world by manipulating your environments and bypass obstacles by finding portals that change the space around you when you walk through them. These puzzles are hardly stumpers, though, and are designed more to simulate psychosis in a game space than to challenge you. The more exciting challenge, I realized, is to discover what these puzzles inform of Senua and her condition. Like a walking simulator, Hellblade’s environments speak volumes to Senua’s mind, and figuring out these connections is a reward mechanic in and of itself. (There’s a featurette included in the game that I highly recommend you watch after completing the story that breaks down the game’s design and the many ways it expresses psychosis.)

As you explore these spaces, you’ll stumble across lorestones that add additional context to the game’s Norse setting, but these come across as largely unnecessary. The number of lorestones you’ve discovered is indicated on each standing stone, however you can’t go back to find stones you might have missed, so what is supposed to be a helpful way to keep count of your progress actually becomes an annoying reminder that you missed a stone in the game’s early zones. It’s a “gamey” feature that could have been excluded in efforts to double-down on what Hellblade does best: allowing the player to navigate a world through the perspective of a woman with psychosis.

Hellblade’s combat, albeit entertaining, feels just as unnecessary. Senua can use a combination of strikes and parries to fell increasingly more capable adversaries throughout her journey, and for the most part, these mechanics are very responsive and visually invigorating, to boot. (Brawls can become frustrating when backed against a wall, though, and in these moments, the game’s dodge mechanic isn’t very functional.)

Don’t get me wrong, combat is fun, and it adds a lot of energy after bouts of slower-paced exploration and puzzle-solving, but I felt that its inclusion was dissonant the game’s loftier goals — giving players the opportunity to experience psychosis. Sure, combat fits the themes of the game and the mythological setting — Senua, a Celtic warrior, is literally fighting her demons — but it felt like an uninspired, tropey way of exhibiting Senua’s struggles in a game that already explores these in non-violent ways. The inclusion of combat admits the developers’ circumspection, but this isn’t to say it isn’t fun or thematically congruent with the game’s overarching themes.

Hellblade’s combat is moderately challenging, but expect your standard enemy archetypes: the guy you can just hack n’ slash, the guy whose guard you need to break, the guy you have to counter a few times before striking…

Combat encounters do add tremendous gravity to the game, as players are warned early on that if Senua dies too many times, their save files will be deleted, indicated by a rot that slowly works its way up Senua’s arm. This permadeath feature frustrated me more than it motivated me, however. I died three consecutive times trying to cross a beam of wood perched high above a rocky shore because the game never instructed me how to use my controller in these segments. And two other times, I died in combat, not for lack of skill, but because when cornered by enemies against a wall, the camera got janky. These moments felt unfair — not deserved, but to their credit, I felt much greater tension with permadeath than I would have without it, for sure.

Hellblade could have been carried alone by its insanely beautiful graphics and standout voice performances -- some of the best of 2017 -- but while these scenarios were always refreshing interruptions from long, meditative walks through Helheim, they distracted from the game’s greater focus on demystifying a taboo mental disorder.

Hunter Wolfe just graduated with his B.A. in Communication/Journalism from Shippensburg University and has nearly four years of professional writing experience. His content has been featured on sites like Rolling Stone's Glixel, Destructoid and The Artifice. You can check out his full portfolio at: www.hunterawolfe.com.
Related Articles: Hellblade: Senua's Sacrifice
Share
Tweet
Share
Submit