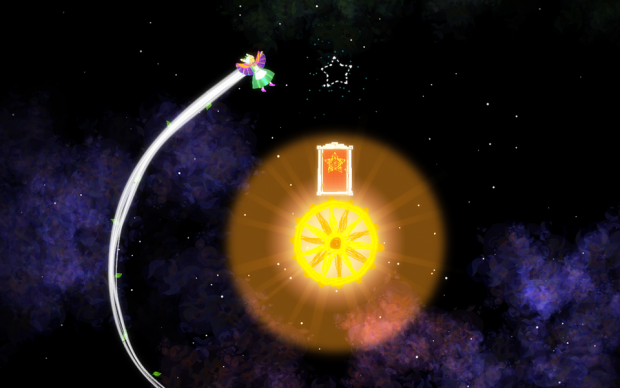 Sometimes you’re not in the mood to wrestle with complicated controls, to struggle with difficult segments of a level that have you grinding your teeth, or to battle it out with stiff competition online. In Gravity Ghost, you’re seldom inhibited by complications and it’s easy to get lost in the ebb and flow of sight and sound. There’s even an endearing story about love and loss that’s left a lasting impression on me.

The game is basically a simple puzzle platformer. You have the ability to manipulate gravitational pulls, gliding and navigating around objects as you figure out how to attain the star you need in each level to move forward. There’s bonus stuff to hunt down too that will further test your space maneuvering skills as well as provide ability bonuses, but for the most part the game is fairly straightforward without much opportunity to deviate.

The levels are actually quite weak from a design standpoint. At times it felt like I was playing a phone or tablet port because of how simple the gameplay can be, although once in a while the game will toss a decent puzzle your way. For instance, you’ll often be tasked with manipulating gravity in such a way that you create the perfect trajectory to grab an item or land on an object. Gradually throughout the game to gain new abilities enable you to mess with the gravity, such as making yourself heavier. These abilities afford you the opportunity to enact a strategy, but you’ll rarely break a sweat.

The art, while pretty and colorful, is repetitive rather than plentiful. It’s not uncommon for backgrounds to be recycled often. The lack of variety in scenery doesn’t hold too much sway, though, as it won’t take more than 2-3 hours to make your way through the game. The cutscenes are reminiscent of Broken Age, albeit more minimalistic, with a chalk painting art style that is attractive yet uninspiring.

The soundtrack, on the other hand, will capture you immediately and not let you go until the credits finish rolling. It’s not surprising that the music is so good, considering it’s composed by the same guy who did the excellent FTL soundtrack – it’s curious, it’s wondrous and it’s oh, so sci-fi.

The story is the big draw for me. Initially it came across as nonsensical and disjointed, I didn’t understand what the exceedingly human narrative had to do with the abstract nature of gliding around space. But as the tale unfolded I began to piece things together, eventually realizing that this is a somewhat reposed expression of death and loss. A week later I’m still pondering over it.