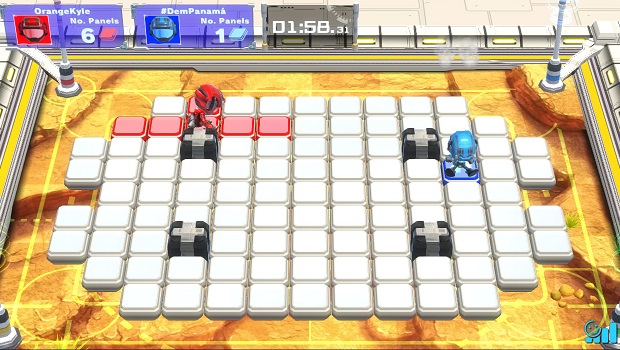 My first thought upon hearing the premise of Flip Wars was, “Really? That’s the whole game? Isn’t that basically just that one minigame from Crystal Caves in Donkey Kong 64? How do you make a whole game out of that?” The answer, as I see it, is that you can’t make that game substantial enough to be worth trying to sell by itself.

The game starts you off with a brief tutorial, which is pretty well executed. It takes you through all the basics quickly so that you’re less likely to get bored and skip it altogether, but it doesn’t advance without player input, so you’re not going to miss anything. This particular aspect is very well suited to Flip Wars’ status as a party game.

To flip panels, you simply jump on one, and several panels nearby will flip over to your color when you land. You move more quickly on panels of your own color and more slowly on panels of opposing colors, so even outside of panel mode, it’s strategically advantageous to flip panels to your color. Some of the panels you flip will uncover items you can collect to boost your capabilities, such as allowing you to run faster or flip more panels with each jump.

Speed boosts on the right, diagonal flipping at the left edge, and flipping area boosts in between.

If an opponent is standing on one of the panels that you flip, they are KOed and return to where they started, losing any item boosts they may have in the process. Some arenas have stationary special weapons you can use to flip over a lot of panels at once.

The button in the middle flips panels in a wide area all around it. Anyone can press it any number of times.

There are a number of different arenas you can play in, varying in presence or absence of these special weapons; some also have hazards that halt your progress for a moment, such as lightning or tidal waves.

There are three ways to play: panel mode, life mode, or KO mode. In panel mode, you just want to have the highest number of panels flipped to your color, similar to Splatoon’s Turf War mode. In life mode, the last person remaining, or the person with the most lives at the end, wins. In KO mode, the person who KOed other players the most often wins. You can play online or with local multiplayer, but either way, it’s not particularly engaging. The nameless, faceless characters you control offer you no motivation to win, and the entirety of the game’s strategic depth is described above. I think cuter, more appealing characters would have helped this game, but that still wouldn’t fix how light the game is on content.

There’s not much else to be said about this game. At a party, I wouldn’t expect anyone to want to play for more than about five minutes, nor would I expect anyone who’s seen it before to want to play it again. And if it only buys you about five minutes of mild entertainment per person per lifetime—something many free games can easily surpass—it just doesn’t make sense to buy it. I honestly don’t see myself ever going back to it once this review is complete. If you look up “forgettable” in a future dictionary, you might see a screenshot of this game.

Flip Wars is a very simple, shallow party game. It's not actively terrible, but it barely offers anything to do. It only costs $9.99, so if you think it looks really fun, it might not hurt to buy it. Someone else might like it more than I do. But personally, for that amount, I’d much rather have Shovel Knight: Specter of Torment, since that offers far greater enjoyment over a longer period than the few minutes I had with this game.

Kyle is an unashamed longtime Nintendo fanboy. Some of his earliest and fondest memories are of playing Super Mario Bros. 3 on the NES with his grandmother. His favorite series are Fire Emblem and Metroid. Outside of gaming, Kyle is also a serious Whovian, favoring the Seventh Doctor and Ace as his preferred Doctor and companion. He also loves superhero movies, power metal music, and basically anything in the space fantasy genre. Avatar by Smashley (@SmashleyDraws on Twitter).
Related Articles: Flip Wars, Indies
Share
Tweet
Share
Submit