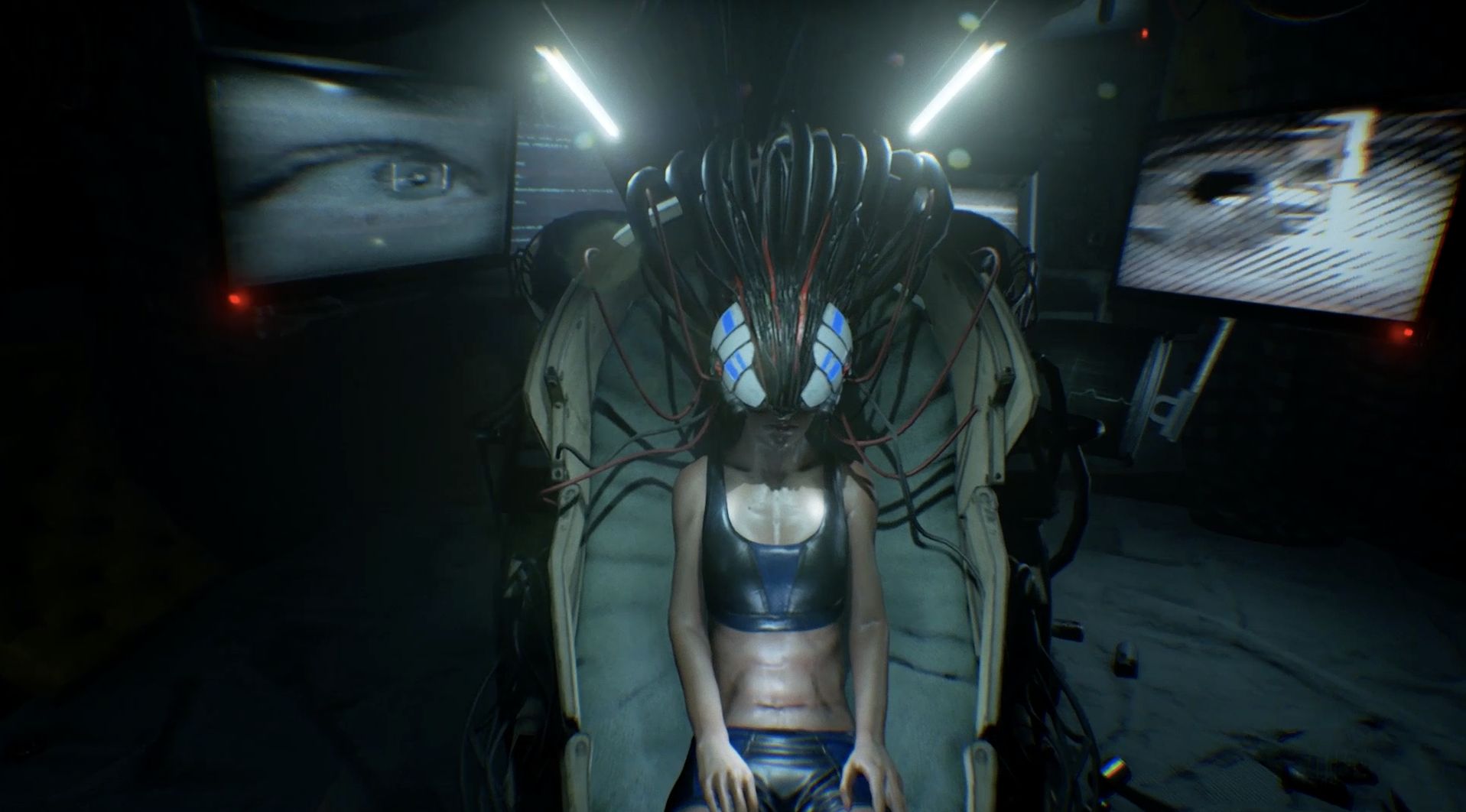 Bloober Team, the crew behind the excellent horror game, Layers of Fear (our review), are back with a new psychological thriller. Set in the year 2084, >observer_ (hereafter just referred to as observer for my own sanity) tells the story of Daniel Lazarski, a heavily-augmented neural-detective capable of not only investigating crime scenes, but also reaching deeply into the psyche of both victims and victimizers alike to find the truth. To steal from the intro – when you can’t remember, when you won’t remember, they bring in an observer.

Unfortunately for our protagonist, he’s as dyed-in-the-wool a detective as you can get. His augmentation requires a near constant stream of medication to keep him from separating from reality, his family is estranged, and age is catching up with him. As the game opens (the first 40 minutes of which you can see below), we find him behind on those meds, glitching, and waking up behind the wheel of his car. The life of Observer Lazarski is anything but simple or glamorous.

Bloober Team channels a lot of what I love about Blade Runner and other retro-futurism games and movies to create a world that’s as believable as it is awful. After a horrible illness called the “Nanophage” wiped out large swaths of the augmented populus, The Great Decimation – a war between East and West – devastated those who remained. With nation states across the world weakened, a massive corporation named Chiron rose from the ashes, forging a new empire from the ashes — the Fifth Polish Republic. The rich and powerful reach new heights, while the common folks scrape rock bottom just to survive. With a nod to the novels of Philip K. Dick, in this corporate-controlled future, your thoughts, feelings, memories, and even your intentions can be held against you. Submission is total, nested in the deepest of despair.

The world of observer is a candy-coated neon landscape, until you look at it closely. Glowing colorful advertisements are projected onto walls with peeling paint and dilapidated cracked facades. Old buildings are covered in the spiderwebs of power and network cabling that obviously exceed its original intent – a patchwork quilt of technological decadence and woeful Euro-building decay. Even Daniel’s Chiron-issued cop car is a blend of analog antiquities and modern voice-controlled interfaces, complete with a few Blade Runner “enhance” moments.

It’s apt that there are so many Blade Runner inspirations, as the protagonist is voiced by movie antagonist/victim Rutger Hauer. His gravely voice and slight accent makes for an authentic and believable storyteller, though there are a few moments where it becomes clear that the audio sessions were recorded at separate times. It’s a minor thing, but it can create an uneven delivery.

In the future, nobody cleans.

One of the best things Bloober Team has done with observer was to take the concepts of Layers of Fear and ratchet them up. As you establish crime scenes, you’ll use your augments to detect biological and electrical objects in the environment, but it’s the mind hacking that really stands out. An observer is capable of entering the mind (courtesy of the aptly named “Dream Eater” augment) of the victims or suspect and “hack” their memories. What ensues is nothing short of a blend of The Ring, Jacob’s Ladder, and Altered States. By entering the minds of the person, living or dead, Daniel is able to relive their darkest fears, taking on their persona for that brief encounter. Naturally, this has a profoundly negative effect on the already-fragile mind of our protagonist. I don’t want to ruin any surprises, but I was reminded of games like Eternal Darkness, F.E.A.R., and Condemned, frequently questioning my own recollection of the environment. “Was that door there before?” “How’d that guy sneak up behind me?!” I’ve purposely not shown you these sequences are they are the sort of shock you should experience without any preconceived notion or, dare I say, warning.

Things are about to get very, very strange.

I did run into a few hitches in observer — occasionally the game would freeze for a moment while the next area is loaded. Additionally, the launch version of the game tries to launch my SteamVR app every time I fire it up. Both are patchable and will likely get ironed out shortly after launch, if Layers of Fear is any indication.

The Replicant becomes the Runner…

The thing I love most about observer is that it paints a picture of the future that only rampant consumerism, gadgetry, and self-absorption can produce. One tenant is terrified as he can’t jack back into VR, having no idea what to do with his non-virtual time. Another seems completely freaked out that there’s anyone outside of his door, as if oblivious to anything beyond his four walls. The world of observer is a glossy veneer that shows its wonderful thematic and paint-peeled underbelly up close. The candy-colored pulsing neon lights are here, but clearly so are the shadows.

>observer_ takes the beats from Bloober Team’s own Layers of Fear, adds a layer of cyberpunk, and somehow comes out the other end both unnerving, and more than the sum of its parts. There are a few small technical hiccups present, and some infrequent uneven voice work, but beyond that there’s an amazing story about the human toll of investigation and observation.

Ron Burke is the Editor in Chief for Gaming Trend. Currently living in Fort Worth, Texas, Ron is an old-school gamer who enjoys CRPGs, action/adventure, platformers, music games, and has recently gotten into tabletop gaming. Ron is also a fourth degree black belt, with a Master's rank in Matsumura Seito Shōrin-ryū, Moo Duk Kwan Tang Soo Do, Universal Tang Soo Do Alliance, and International Tang Soo Do Federation. He also holds ranks in several other styles in his search to be a well-rounded fighter. Ron has been married to Gaming Trend Editor, Laura Burke, for 21 years. They have three dogs - Pazuzu (Irish Terrier), Atë, and Calliope (both Australian Kelpie/Pit Bull mixes).
Related Articles: >observer_, Let's Play
Share
Tweet
Share
Submit