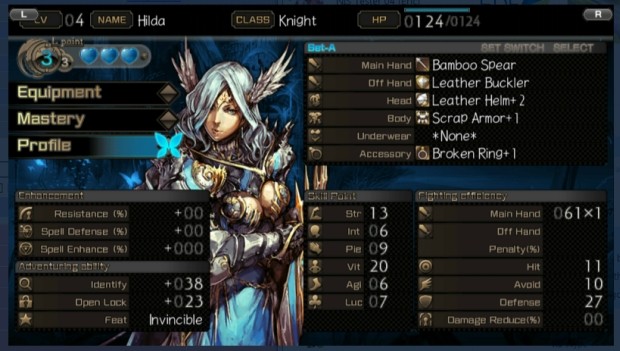 While the Vita hasn’t been the success the Nintendo 3DS has, it seems like certain developers have taken a liking to the system. With Demon’s Gaze and Operation Abyss: New Tokyo under their belts, Experience Inc. seems to be comfortable with the capabilities of the Vita to support it. They have come back with another RPG for the system, Stranger of Sword City.

Experience Inc. can’t be called complacent about the settings of their games. Demon’s Gaze had a high fantasy setting, while Operation Abyss has a sci-fi flair. Stranger of Sword City takes place in a modern alternate fantasy setting.  The first clue of this is your character being the only survivor from a plane crash. You won’t mistake the clothing worn by other characters as power armor, though they have their own aesthetic to them since you are in an alternate reality. While the monsters and characters have a fantasy bent, you never feel like anyone will break out to you speaking old English.

Anyone who has played any of the previous Experience Inc. games will instantly see similarities between Stranger of Sword City and their previous games. Most of the game centers around a hub where you can buy and sell equipment, talk to other characters, and travel to other destinations. The dungeons consist of blocks in a grid formation, similar to old-school RPGs. Battle screens consist of seeing the enemy in a first-person perspective with your party represented by figures at the bottom of the screen. The portraits are mostly static with slight animations showing damage and effects, typically of something you’d expect from other portable RPGs. While the setting is different, the gameplay is familiar.

Equipping your party for different enemy abilities is essential.

The title of the game is appropriate, as you find out you aren’t the first person to land mysteriously in this alternate dimension. These people are called Strangers, and Strangers have the ability to handle weapons and armor that typical people can’t. Because of your special abilities you are recruited by a crew to fight Lineage monsters, basically the boss monsters of the game. It’s a mechanic that glues your party together, but you’ll find much more story as you play the game.

While traversing the dungeons are fighting affairs you’ll gain money and equipment, but other options are available for you to consider. Some areas allow you to hide your party and ambush a set of monsters. When you do this you can actually see what will be dropped by defeating that grouping. You then have the ability to attack or decide to wait and see what else comes along. You can’t stay hidden forever though, and if you wait too long your party gets found out and placed at a disadvantage. The dungeons themselves do differentiate themselves by the foes in each area and the look of the tiles within it. However, if you aren’t used to this style of classic Eye of the Beholder/Might and Magic movement, the experience might be a bit jarring at first. Also, the game’s dark graphics evoke a bleak future, which is in line with the story.

The party screen, one of the most important screens you’ll use.

Your party consists of six members including yourself. You not only need to manage their equipment, but also the location in the battle. Three characters consist of the front row, and three characters make up the back row. Party members in the back row can’t attack through melee combat, so you basically have your tanks and melee combatants in the front, while keeping your healers, magic users, and ranged fighters in the back. It conceptually reminds me of the combat in the Disciples series of games. You assign what each character in the party should do before each round of combat, and then each combatant performs their command. However, their position isn’t the only consideration you need with your party. Different enemies have different strengths and weaknesses, so you may need to use different party members or load up with potions to defeat new enemies. If the front row of your party dies, it might not be a bad idea to have a little muscle in the back. Characters can also die permanently, so trying to power through with a single party can be devastating if you lose one of them. While you can revive characters, you can do it a couple of times before they no longer available, and the time this takes can be detrimental to your progress.

The characters in your party can be created from scratch, and the typical races and classes are available. A few surprises like Ninjas, Samurai, Migmy, and Ney are available as well. The age of characters affects their abilities as well. The younger a character, the stronger they are and can recover quicker, but older characters have experience. You can create a party however you like, and the game won’t prevent you from making a build no matter how poor it may be. Getting the right equipment will help, but smart choices will help you get through faster.

Stranger of Sword City mixes the old-school gameplay of classic RPGs with modern aesthetics and story. It adds a few new mechanics that differentiates it from other RPGs you’d find on any system, whether home or portable. If you are looking for a challenging RPG that gives you plenty of options, then give Stranger of Sword City a good look.

While not working as a Database Administrator, Keith Schleicher has been associated with Gaming Trend since 2003. While his love of video games started with the Telestar Alpha (a pong console with four different games), he trule started playing video games when he received the ill-fated TI-99/4A. While the Speech Synthesizer seemed to be the height of gaming, eventually a 286 AT computer running at 8/12 Hz and a CGA monitor would be his outlet for a while. Eventually he’d graduate to 386, 486, Pentium, and Athlon systems, building some of those systems while doing some hardware reviews and attending Comdex. With the release of the Dreamcast that started his conversion to the console world. Since then he has acquired an NES, SNES, PS2, PS3, PSP, GBA-SP, DS, Xbox, Xbox 360, Xbox One S, Gamecube, Wii, Switch, and Oculus Quest 2. While not playing video games he enjoys bowling, reading, playing board games, listening to music, and watching movies and TV. He originally hails from Wisconsin but is now living in Michigan with his wife and sons.
Related Articles: Stranger of Sword City
Share
Tweet
Share
Submit