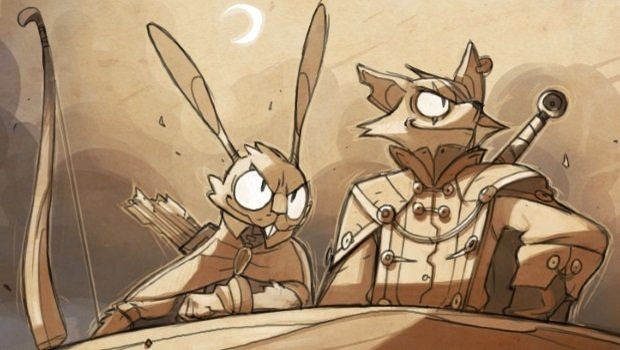 They say the adventure is more about the journey than the destination. In Stories: The Path of Destinies, you will have to walk through many paths to get to your final stop. Those many walks pass by blissfully though, thanks to stellar combat and a unique, vivid art direction and style. Being stuck in a Groundhog Day-esque loop isn’t quite so bad when a game is this solid.

In Stories, you play the role of Reynardo, a roguish fox and freelancer for the Rebellion. Through a stroke of bad luck, Reynardo falls into the possession of a book of destinies, placing him in a constant time loop. He has little time to prepare before the final battle between the Rebellion and the evil Emperor, and he needs to find a way to turn the insurmountable odds back in his favor. Through the time-looping book, you’ll try and fail many times to take down the Emperor, whether it’s through magical artifacts, subterfuge, or (quite literally) a hare-brained scheme.

The narrative thrives in your attempts and failures, though, as the only way to discover the “hero’s path” (colloquially, the final or true path) is to learn information and feel out the correct way forward. Though Reynardo perishes at the end of each path, that death might teach you something important; maybe your best friend is more of a frenemy, or a secret weapon that lay dormant for years was left alone for a good reason.

Little moments of story punctuate the sound and fury of combat.

Through unlocking truths and discovering the critical path of Stories, it’s easy to become attached to the menagerie of colorful characters in the cast. Reynardo is the kind of swashbuckling rogue with a streak of bad luck that you love to root for, and Zenobia is a complicated but compelling foil and love interest for the fox. A narrator divulges all the story and exposition as well, and becomes as much a main character as any of the visible cast. Little quips are sprinkled throughout each level, noting your penchant for breaking vases in search of collectibles or the strange abundance of elevators.

These asides help move the story along, as you play through several chapters many times over to find the truths you need for the final path. Though it will likely take only five to six runs to see the end credits roll, each path consists of five chapters, with choices between each that determine which area you’ll go to in the next chapter. There’s a lot of narrative threads to follow, but a smaller amount of actual locales, leading to a lot of playing through the same areas and encounters several times throughout your playthrough. Multiple options for traversing these chapters exist, like choosing between zipping across a chasm using Reynardo’s hook tool or unlocking doors using different elemental swords, but by the time you close the game out you’ll be fairly familiar with the handful of areas you can explore.

Reynardo’s sword and hook aren’t just for exploration, though; the combat of Stories is fluid and effective, elevate any trek through well-worn ground. Taking some knowing beats from brawlers like Shadow of Mordor and the Batman: Arkham series, combat in Stories is as much about managing a crowd and timing parries as it is about chopping and slicing foes with your sword. As a seasoned warrior and student of Sword Fu, Reynardo is extremely capable with a blade, and can dash around the battlefield with speed and dexterity befitting his style. His toolkit also includes the aforementioned hook, which he can use to pull enemies closer for a quick hit, and grabs that let him toss enemies into each other or off cliffs. Upgrades push his skills even further, giving him new elements and abilities for his sword, as well as letting him freeze time when he parries and many other neat tricks.

Bad guys won’t just let you send them flying, however, and as you go further down each path towards your ultimate destiny the simple raven soldiers will continually upgrade their ranks to combat you. Elemental wraiths, shield-bearing warriors, and kamikaze bombers will all attempt to impede your progress. Though Reynardo gradually becomes a force of nature and fury over the course of Stories, the enemy line-up is always proficient enough to test your mettle, leading to some of the most satisfying brawling action I’ve played in recent memory. The only qualm I had was the disappointing lack of boss battles or significant named enemies – most of the big fights against specific characters happen in the game’s storybook-esque interludes between chapters, rather than within the player’s realm of interaction.

Upgrades, like this one that freezes time on a perfect parry, are as effective as they are pretty.

All this action and narrative takes place in a striking visual space, a world that looks almost painterly in aesthetic. Each chapter, from the hollow desert temple to the storm-ridden, craggy mountain Nexus is gorgeous, and as you explore through each area it becomes incredible to find new paths and see more of the beautiful world around you. The trade-off, at least on consoles, is a mild performance hit in some of the detailed vistas, but it’s minor compared to incredible art at play.

Areas like the Desert Temple are massive and a sight to behold.

As a whole, Stories: The Path of Destinies is a brilliant work that manages to meld several different styles and systems together into one package. The time I spent with Stories was brief, to a point where I was left wanting more at its conclusion, but that brevity leads to a sense of cohesion and individuality powerful enough to overlook the short time spent with it. Though it wasn’t perfect, I found I was willing to overlook most of my issues with Stories, because the end result was something refreshing, compelling, and wholly unlike any other game I’d played before.

Stories: The Path of Destinies

Stories: The Path of Destinies mixes looping narratives, engaging brawler combat, and beautiful scenery to create a compelling indie adventure that should not be overlooked. Not wholly without fault, but even in the imperfections it’s easy to find a lot to love in Stories.

I'm a Texas native and graduate of Texas Tech University, freelancing in the gaming journalism industry. I love games, live music, Texas BBQ and sports. Favorite games are The Witcher 2, anything from Bioware, the Kingdom Hearts series and Dota 2.
Related Articles: Stories: The Path of Destinies
Share
Tweet
Share
Submit