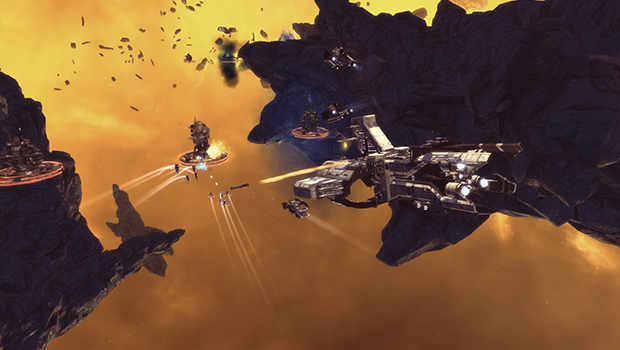 Ancient Space is a story-driven, singleplayer real-time strategy game that takes place in – you guessed it – space. It’s very reminiscent of Homeworld. However, unlike Homeworld, I did not leave Ancient Space feeling like I just played one of the best games the genre has to offer. There’s a lot of potential here, but the reality is the game feels rough, from the presentation to the gameplay, and could desperately use more polish.

The biggest offense is the A.I. of your units; they’re simply not smart and require an exorbitant amount of micro-managing. Ships are classified by their sizes like t-shirts, measuring from small (S) through extra large (XL), and each ship has strengths and weaknesses that are outlined in their stats when you select them. Some ships do more damage to smaller ships, some are better with larger ships, and some wreak the most havoc when they’re attacking a building. It takes way too many clicks of the mouse to go through the motion of making a specific ship attack a specific target. It’s quite tedious and it wasn’t long into the campaign before I started feeling frustrated.

Despite the superfluous nature of the controls, combat can still be a lot of fun. The ships all have unique attributes and abilities which, if used properly, can quickly turn the tide of a battle. Missions tend to start with the enemy already set up on the map, with outposts geared up to repair their own ships and attack yours. Often you will find yourself outnumbered. There were many instances where, although the enemy had a larger force than mine, with the measured use of special abilities I was able to gain the advantage and win the battle. It’s in these moments that Ancient Space is at its best, but it’s not rare for the clingy control scheme to spoil the moment.

An upgrade and customization system means that there’s more to the gameplay than flying and shooting. Before the start of a new mission you’ll be given the opportunity to spend resources, which you collect during the missions, on upgrading your ships and purchasing new abilities. You’ll also select up to three Captains, each with their own special ability which has an effect on every unit on the map, as opposed to ship abilities which may affect single ships or produce an area effect.

Ancient Space is ambivalent about its looks; on one hand, the art direction is fantastic and the set pieces are beautiful. You’ll see blazing stars on the horizon, mining colonies embedded in massive asteroids, and great attention to detail within the ship models. On the other hand, the user interface does not seem optimized. It’s logically laid out, I’ll give it credit for that, but somehow it doesn’t seem to fit my screen properly, as if I activated a zoom option on my monitor and the edges are being cut off. The 2D textures used within the interface and as icons throughout the game also appear low-res, making me wonder if I have some graphical setting set wrong. I tried tweaking various video options and changing the resolution but it didn’t solve the problem. It’s not a major issue but certainly contributes to my sentiment about the game being rough.

Being that this is a narrative driven experience, it’s no surprise that the soundtrack is excellent, effortlessly shifting from ambient to epic at the right moments. I can’t sing the same praises for the sound effects, though, as they’re simply present and lack the iconic audio that something like a Star Wars movie brings to the table. The game is also supported by a surprisingly star-studded (at a B-level) voice cast, with the likes of Ron Glass (the religious guy in Firefly) and Dina Meyers (the girl constantly chasing Rico in Starship Troopers) lending their voices to the characters.

Ancient Space is a decent space strategy game that leans heavily on story and action rather than asking the player to learn deep, intricate systems, making it very approachable and easy to grasp. There’s fun to be had but often times the tedium of the controls and lackluster A.I. will bring the momentum to a screeching halt. Take the game for a whirl if you’re into the space setting, otherwise, there are better strategy games to spend your time with.

Ancient Space is a beautiful, almost good space strategy game that falls short due to the amount of work it requires to control your units in battle. The upgrade and customization system lets you outfit your ship with abilities to your liking, and at times the core of the gameplay, which is combat and exploration, is a lot of fun. There's even a well-developed narrative and killer soundtrack. If you're a fan of space strategy games, you might enjoy Ancient Space, otherwise, it's not worth the frustration.