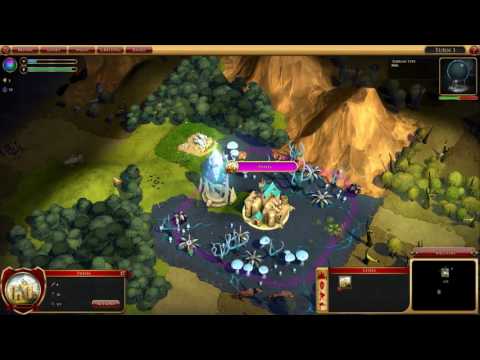 This year has been a rich and varied landscape for strategy games, both real-time and turn-based. Masters of Orion: Conquer the Stars, Ashes of the Singularity, XCOM 2, Homeworld: Remastered, Homeworld: Deserts of Kharak, The Banner Saga 2, Offworld Trading Company, Romance of the Three Kingdoms XIII, and the upcoming Civilization VI isn’t even an all-encompassing list. To add to the list, I’ve gotten my hands on Stardock’s newest 4X title, Sorcerer King: Rivals for a break from scouring the stars. Time to don my pointy fantasy ears and see what this standalone expansion has up its robes.

For those of you who are new to the 4X genre, it stands for eXplore, eXpand, eXploit, and eXterminate, which ties together almost all of the games listed above, whether you are taking the action as it comes, or one step at a time. Sorcerer King: Rivals, as you might infer from the title, takes up a fantasy mantle expanding on the main game released in July of 2015 to critical acclaim. This standalone expansion carries with it a similar storyline as the base product — an evil being called the Sorcerer King plans to ascend to Godhood through the mastery of mystical crystal shards that dot the landscape. Masquerading as friend, this foe is biding his time and rallying forces, hellbent to destroy your world. Will these evil entities ever learn?

The game opens with the player having already lost. The Sorcerer King has already conquered the world, and your job is to claw back from the brink of oblivion. Cast as one of eight characters, a Dwarven King, Archlich, Wizard, Commander, Tyrant, Guardian, Priestess, or Tinkerer, you’ll cast spells, build cities, assemble armies, and team up to save the world. Each character has a unique power to help you with that aim. For example, the Archlich can cast a spell that makes a unit unable to die, but continuously costs two mana to keep alive, whereas the Wizard can cast a spell that has a chance of turning the enemy to your side. Once you’ve got the hang of things, each character can also be customized with a selection of eight skills, starting parties, and spellbooks. Admittedly, this customization does make the hero selection somewhat cosmetic as these skills are mix and match at will — nothing is bound to a particular leader.

In an Ultima-like opening, players are asked to make choices to build out their character. The results of your questions yield results tailored to your decisions. As an example, as my character eschewed anything but her magical studies, she had +20 to Lore, but received no bonuses to city defenses, defense, or other stats. When you’ve gotten a few rounds into your city building, these initial decisions don’t add up to much, so don’t sweat it if you happen to make a poor decision.

With your Sovereign selection and customization behind you, you’ll choose from five difficulty levels. Immediately you’ll notice a few things that are different from games like Civilization. In that series you can expand as you see fit, dumping cities every few hexes with impunity. In contrast, Sorcerer King: Rivals restricts new cities where resource indicators exist on the map. This makes the eXterminate part of the 4X formula important as you’ll have to expand aggressively. Failing to do so means having to wrest control away from the enemy by force and then holding the city through relentless counterattacks. It takes away the “easy button” present in a lot of other 4X games.

Unlike other strategic games where the various bandit mobs are a minor nuisance, the AI-controlled neutral mobs are downright problematic. To help keep them in their place, you can use the unique features of Rivals — terraforming. Not unlike classic Bullfrog precursor game Populous, you can raise and lower land using spells, forming natural barriers to isolate, trap, and route foes. It helps perpetuate the feeling that you are a god instead of just a player controlling the action.

Tactical combat is a welcome addition to the formula

The best addition to the 4X formula comes in combat. Rather than having your icon and that of your foes clash together with the victor occupying the space, Sorcerer King: Rivals pops you into an isometric battlefield where you can battle with the enemy directly. Suddenly things like flanking, area of effect spells, counterattacking, and other RPG-centric elements are at your fingertips. Knowing the strengths and weaknesses of your troops can turn an overwhelming enemy force into paste, outflanking and outthinking them. You can auto-resolve combat, but I encourage you to skip that idea — combat never gets old in this new system.

To help flesh out the RPG tie-in, as you quest through the map, you uncover equipment, spells, crafting components, and more to kit out your crew. This extends to your troops as well as your heroes, making the included crafting engine that much more valuable. It also makes each unit lost in battle that much more valuable. Similarly, you can research spells that can be unleashed in battle, or used to manipulate the landscape, extending your power as both ruler and deity.

There is a new victory condition with Sorcerer King: Rivals — ascension. Unfortunately, it’s less appealing than I’ve just made it sound. As your campaign progresses, the Sorcerer King will begin to advance his own ascendency plan. When the orb fills up, whomever has 75% or more of the power instantly wins. You counter this by casting a progressively more expensive ascendency spell. If you are trying to use this win method, you’ll likely secure your cities and hunker down, but this makes the endgame a bit of a slog as this method is painfully slow. Perhaps I’m not that patient, but I prefer a military victory instead.

All in all, the game is a solid foundation for a 4X games, and the new features bring enough new to the table for fans of the genre to stay entertained. If I ended the review right here, however, it wouldn’t tell the whole story.

Sorcerer King: Rivals comes with a world building editor. With full Steamworks support, the editor gives you the entire toolset to create games of your own, utilizing a tile-based engine. The system is point and click and straightforward, but powerful. Built on XML, you’ll likely need a little bit of code knowledge to make it really dance, but thankfully there are already decent tutorials, as well as a few sample quests and maps that you can modify for your own uses.

With quite a few twists on the traditional 4X formula, Sorcerer King: Rivals has a lot under the hood. The combat is a substantial improvement, offering a new way to engage the enemy, and the RPG elements expand gameplay even further. The editor is a cherry on top of an already full package. While it has a few balance issues in the endgame, Sorcerer King: Rivals shines brightly in a crowded genre.

Ron Burke is the Editor in Chief for Gaming Trend. Currently living in Fort Worth, Texas, Ron is an old-school gamer who enjoys CRPGs, action/adventure, platformers, music games, and has recently gotten into tabletop gaming. Ron is also a fourth degree black belt, with a Master's rank in Matsumura Seito Shōrin-ryū, Moo Duk Kwan Tang Soo Do, Universal Tang Soo Do Alliance, and International Tang Soo Do Federation. He also holds ranks in several other styles in his search to be a well-rounded fighter. Ron has been married to Gaming Trend Editor, Laura Burke, for 21 years. They have three dogs - Pazuzu (Irish Terrier), Atë, and Calliope (both Australian Kelpie/Pit Bull mixes).
Related Articles: Sorcerer King: Rivals
Share
Tweet
Share
Submit