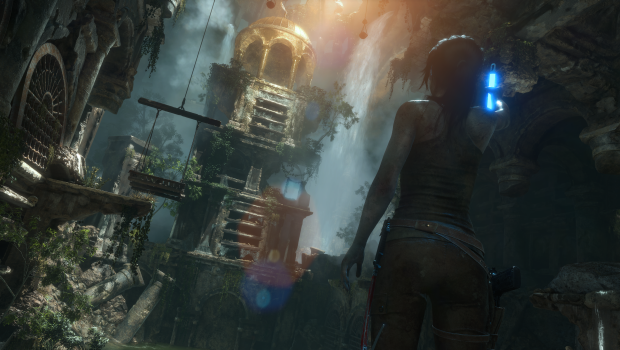 Though last year’s Rise of the Tomb Raider wrapped with a satisfying conclusion and a cliffhanger for events to come, there’s still a great deal to do in the massive playground of the Russian mountains. The first story-based downloadable content for Rise, about the witch Baba Yaga, is a good enough excuse to delve back into the arctic wastes, though it isn’t quite as awe-inspiring as the main campaign.

Jumping back in and playing the content is simple enough, as you just have to go to a new marker to start the events of the DLC. Lara is investigating a firefight between Remnant and the remaining Trinity forces when she meets Nadia, a young Remnant fighter looking for her grandfather. Years ago Baba Yaga took Nadia’s grandmother Serafima, and with the recent activity in the mountains, her grandfather Ivan decides it is time to take his revenge on the witch.

The plot of the new mission is fairly straightforward, as you chase after the grandfather and the trail of the witch, discovering whether or not the Russian tall tales are true. The supernatural aspects of Baba Yaga are grandiose and exciting, with her massive hut stalking atop the trees on gigantic bird legs. The mystical action is where the DLC shines the most, culminating in an exciting boss fight with a number of interesting mechanics.

When the splendor subsides, though, the missions can get a little straightforward and dull, and it calls attention to some of the more tepid sides of Rise of the Tomb Raider. Hunting and gathering is interesting when you’re doing it for fun, or to get a new outfit, but as a mission objective it can get intensely frustrating to retread old ground multiple times looking for one resource.

The actual story also falters, as besides the confrontations with the witch herself, a lot of the major plot moments are tedious. Retreading Lara’s issues with guilt and her father seems odd after the conclusion of the main campaign, and her presence in the plot seems merely as a catalyst to move the action forward.

The true focus is on Nadia’s grandparents, and the story of how they met, fell in love, and fought back during the Soviet occupation of the natives’ lands. Since this is told only through notes and documents, it’s easy to miss some, but it’s good to see that the series penchant for compelling side stories hasn’t faltered in Baba Yaga.

It does get a bit awkward when major story moments play out in-engine; there’s no cutscenes or cut-aways, so some of the more pivotal scenes are acted out through in-game animations. It often calls attention to the odd, jilted motions that other NPCs make compared to the breadth of emotive and reactive animations for Lara.

Besides action and story, the Baba Yaga DLC is actually slim on real tombs to solve. There’s one short puzzle segment, and while it is a decent puzzle, it didn’t feel as exciting to solve as any of the main game’s tomb areas. It’s also strange that the only new equipment you get for the DLC is given to you after you complete it — I would’ve much preferred to tackle the new content with a new bow and accessories, rather than get them after my reason to re-invest was finished.

As a short, fun burst of content and an excuse to revisit the things that you loved about Rise of the Tomb Raider, Baba Yaga works. It’s not too long, and has plenty of massive set pieces and new puzzle mechanics and concepts to keep you engaged; it’s also just a little slim on the story motifs and polish that made the base game as captivating. Baba Yaga is a piece of a greater whole, but observed on its own, it doesn’t shine as bright as other pieces.

Baba Yaga is a good excuse for another adventure with Lara, but it doesn’t hook quite as deep as its base game. Besides an excellent boss fight and a few major moments, nothing here stands out from the fold.