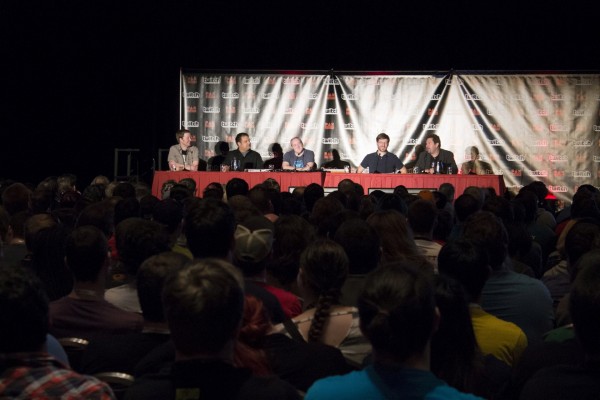 The XCOM 2 panel at PAX South in San Antonio opened with a look backward to XCOM: Enemy Within. Joining the Firaxis team on stage, the Long War Studios team behind (obviously) The Long War Mod, showed us how (without the source code from Firaxis) they managed to build what has become a near-canon addition to the incredible original game. As Firaxis and 2K began to formulate XCOM 2, they decided to pull in the Long War Studios team in an official capacity. They’ve brought together three individual mods that will ship on release day, available on the Steam Workshop for free to demonstrate the power of the modding toolkit. This integration with some of their biggest fans helped the team at Firaxis build a more moddable game, which benefits the developer and fans alike.While we are getting an incredible amount of content with XCOM 2, it sounds like Firaxis just opened it up even further.

The panel was fantastic, getting to see the incredible tools that bring XCOM 2 to life.

It’s pretty likely the Firaxis crew had two purposes to engaging the LWM team — bring the most popular modding team to the fore in an effort to ensure that the mod tools are user-friendly and ready for the community, and to have a proven set of fan-created mods to demonstrate (and template) the new system’s power and flexibility. The LWM team tackled three mods right out of the gate — a new weapon type, a fresh take on an enemy, and a soldier class mod, all of which will be available for free at launch.

The weapon mod will provide some magnetic beam weapons to even the score against the alien threat. You’ll need those weapons, as the LWM team has also modified the already-dangerous Muton, creating a Muton Centurion. This Centurion will act as a leader amongst the invaders, buffing those around him in addition to his formidable strength and weaponry. To offer a counter-balance to that threat, the XCOM team’s mod will add a Field Commander.

The Field Commander is a class beyond what would have been the Colonel rank in XCOM: Enemy Within. You’ll be able to rank up as many of your soldiers into this position as you’d like, but you can only have one in the field at a time. This limits their potentially overpowering effect, but the buffs they provide could be the soldier to turn the tide.

This is a quick beam weapon mod.

XCOM 2 Development Tools
To enable the community to expand the XCOM 2 universe with their own creations, the team is providing a 45GB separate download of the tools and data that brings the game to life. Every asset you can imagine will be at your fingertips: more than 4000 bits of material, 10,000 textures, 2000 sounds, 3000 particle effects, 600 character assets, 7000 props, and 600 animations helped bring the 2400 maps (yes, 2400 — that’s a bit more than the roughly 100 present in Enemy Unknown) that will ship with XCOM 2 to life. Even the assets that the team used for cinematics will be available to use; this could mean new cutscenes, machinima, or whatever else your mind can conjure.

Using the Modbuddy Framework, you can mod any object in the extensive library I mentioned above. One developer mentioned that all of the birds in the game are classified as particle effects, and joked that he wanted to see a rifle that fires pigeons as bullets. I think we should grant his wish. The team is very excited to see what the community can do with the keys to the entire kingdom, but to help they are also shipping instructions and templates from which to build. From what I saw at the panel, starting with something simple like attribute modification on armor or weaponry should provide enough of a toe in the water to do amazing things.

Conventional weapons can be modded as well.

Along with the SDK, the team is unlocking the dev console to help test and debug their creations. The debug state takes notes of all aspects of the action, including when you were spotted, if an enemy has used something, your level of cover, and far more behind the scenes information not normally visible. Line of site can be shown using simple line representations. With the ability to deform the environment from this dev console, you could create and adjust on the fly, enabling ambush sightlines, or creating cover and defilade. With the map editor turned on, you can also check your heights, showing what the world looks like from the perspective of individual characters, so it’s never a mystery why a specific action or behavior was triggered. This will enable modders to more cleanly execute on their vision without having to guess why a piece is working or not.

Within the editor, the devs showcased two new modes that content creators should appreciate — something they’ve dubbed “Marketing Mode,” and Replay. Marketing Mode is what the team used to create the fantastic screenshots we’ve seen in the weeks preceding the game’s launch. It allows you to no-clip through the environment, taking screenshots from any perspective or position without icons or other items that might ugly up your potential new background image

Replay is something that you’ll find useful inside and outside of mod creation, as it allows players to view the history of a fight. You can do post-fight analysis of the carnage to figure out where it all went wrong, or that crucial moment where the mission came together. You can use this on any save file in the main game, but it also makes for very portable code for any multiplayer efforts

XCOM 2 – Making Maps
The final section of the hour-long talk on modding in XCOM 2 revolved around the area where XCOM: Enemy Unknown needed the most attention — map creation. As I mentioned above, there were only 100 maps in XCOM: Enemy Unknown, which hurt replayability with its static nature. Knowing that they needed to correct this, the team created a procedural system that allows maps to be assembled from various blocks to create a new experience every time you take the field. It was this piece of this talk that made this talk a must-see for me.

Procedural generation has been attempted before, and with a great deal of quality variance in the end result. The team wanted something that would create something as high-fidelity as the hand-crafted work in their past, assembled seamlessly from the various set pieces in the library. Popping to the editor, it was easy to see that this assembly is snap-together, combining the pieces of 20 different objects into one cohesive map. These pieces are split into Parcels, PCPs, Plot Types, and Biomes.

Parcels are the “meat and potatoes” of XCOM 2. They are the set pieces I talked about in my review of The Art of XCOM 2, falling into small, medium, and large segments. These can be small houses, cottages, a large connected pair of apartment buildings, alien structures, and everything in between. As the team snapped a few of these together, it was easy to see that a great deal more attention has been paid to verticality for this sequel, but they were also quick to point out that this verticality brings danger as well. Floors can be destroyed, as can roofs, which can cause you to fall to your death. Conversely, it creates opportunity to ambush or otherwise destroy your foes — it’ll be interesting to see this in action.

To create a world that feels more alive, you need the connective tissue to connect the parcels together. These are PCPs. They are the roads, railways, sidewalks, and other pathing sections that connect the Parcels. They can be entirely static and scripted, dynamic, or a mixture of both — the system is very flexible.

To ensure you don’t have an actual square jungle block in the middle of a downtown concrete jungle, the team has divided up the maps into sets. They are calling them “Plots”, subdividing them into City Center, Shanty Town, Small Town, Slums, and Wilderness, though it is not nearly as simple as all that. To really bring it to life, you need the next component — Biomes.

The original plan was to create three biomes for XCOM 2. These would color the Plots into jungle, snow, or the like, but like the Enemy Unknown map system, it would have proved insufficient. Pulling the same card from the deck, they instead built a system that allows modders to adjust individual elements in the Plot en masse. To demonstrate this, the team slid through a variety of biome adjustments, showing the same cabin transition from arid desert conditions to mild overgrowth, severe plant infestation, light snowfall, and deeply-packed snow. Now, rather than building entire maps and adjusting each piece, the individual style can be modified with the smallest amount of effort.

A modded leader class addon gives you a Field Commander.

The last goodie the team had to show us ahead of launch was a massive technical step forward, and likely the reason this game is PC-only — a brand new, real-time lighting engine. In Enemy Unknown, maps were set in specific times, meaning the maps were always scripted for that time. Now, using this new lighting engine, you’ll tackle missions at any time, day or night. The map may change significantly based on the time or day. Could modders build something like a “night stalker” mod that enables more damage during evening hours, or enhanced targeting during the day? You bet.

If all of this sounds complex and difficult, rest assured — the Tactical Quick Launch should allay your fears. Flipping over to this real-time debug mode, you can now build a map, customize, mix and match the pieces of it, and then using simple dropdowns, render the map dynamically before your eyes. Clicking the start button drops you right in the middle of the action — a perfect test bed for your mods.

The examples of dynamic creation, as well as the tools used to create things with more complexity looked entirely seamless. It was impossible to see the edges where one PCP pushed against another, and each biome piece was flawlessly integrated into the scenery. Pulling back to the editor, it was easy to see that over 20 different map pieces were used to create this demonstration layout. Seeing how the modding community has breathed new life into other games, it spells a very bright future for XCOM 2. Couple that with the ability to push mods directly to Steam Workshop, or even zip your creations and distribute themselves, the only limit is truly your imagination.

An entire squadron of modded soldiers.

The final gift team Firaxis had for us before we headed back to the show floor was a look at the introduction to XCOM 2, and you won’t have to wait long to see it for yourself. XCOM 2 is set for release on February 5, 2016.