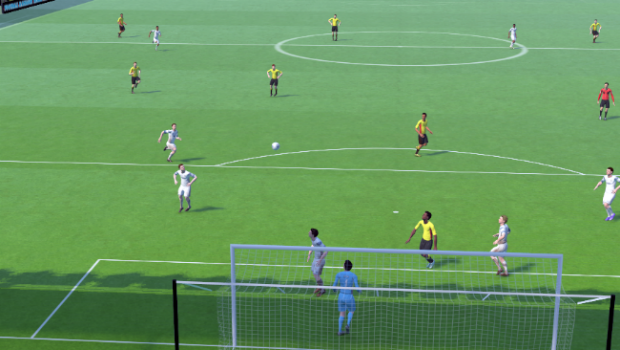 I guess that 2016 has taught me one important lesson:  I really don’t know much about anything at all in this strange and fascinating world. I was wrong on what I believed the Brexit vote would be, I was confident that our presidential election would come out the other way, and I also have no clue how to optimize a football squad for 3-1-3-3 Wide and 4-2-4-1 Asymmetrical at the same time.

While not having much knowledge to share regarding the situation here in the United States, Football Manager 17 does have some interesting things to teach regarding Brexit, however, but more importantly, it can teach you everything you could ever want to learn about the world of football. For a dumbfounded American like myself, this can be both an exciting invitation and a daunting task.

FM17 is an incredibly fancy and stylish sports simulator, standing light-years ahead of other games in the genre in terms of look and feel. Other sports simulators substitute graphics for substance, but FM17 is quite the opposite. Deep, flexible, and incredibly tough to master, FM17 is a strangely realistic world simulator with football as the main focus. If the on-the-pitch action is only the second most exciting aspect of the game, the first is surely the game’s ability to make you feel like a real human manager.

The game starts with manager creation, and while you may get the human “feeling” while playing, you will not be able to enjoy a human “look.” The character model is pretty clunky looking, sort of like a Stretch Armstrong in a suit (be it professional or track.) You can create a face, or you can scan a picture to create one. The 3D face models are not perfect, but are much more accurate than you’d expect. My manager, that you can see below, is a ghostly mirror of the outsider musician that I based him on, but also manages to capture a likeness well.

After you’ve created your manager, you choose an online career, or a local one. You select a team to manage, the number of coaches you’ll be controlling, and other aspects of your world. This can be as wide or narrow as you like, with a litany of leagues across all inhabited continents. From there, things only get more detailed, customizable, and free. With only a board of directors holding you back, you make all of the decisions for your team, from individual training sessions for youngsters to the doctor who works with the developmental team.

The main work is done by building a team that can compete on the pitch, and this game provides a flexible setup that gives the player full control beyond any other in the genre. You can set your own custom setup for the lines you want to run, and then build your team around your vision. I used a line of 3-1-3-3 Wide DM, which means I had three offensive forwards (one working as a decoy), 1 player in the middle on offense, and then a stack of 6 defenders, with a diagonal line through the middle.

If that sentence sounds complicated, then you should get this game and let it make you more comfortable with the complexity of football planning. You may not improve much in terms of execution (I know I haven’t) but you’ll almost immediately become obsessed with the planning and complexity of creating new lines and strategies. The game is littered with help options and prompts that are easily recalled. These help guide you through the minutiae while you get accustomed to the overall game, and this also leads to a deeper understanding of overall football strategies and the lingo of the game.

The Xs and Os of management is not the only aspect of team building, and no simulator on the planet has captured this in a more convincing and almost eerie fashion as Football Manager 17. The task of dealing with the media, the upper brass, the players, and your fellow coaches are all unique endeavors and there is a certain “memory” built in so that each interaction is an extension of the last.

For instance, I had a transfer request come in for one of my star players. The request would have sent him up to a higher competitive class, and he was very interested in doing so. I denied the request, and so the player requested a meeting with me. I had to talk him down, and try to explain that with his help I was planning to build a team worthy of championship contention, but he refused to believe me. He demanded that he be allowed to leave, and so in anger, I sent him down to train with the Under-19s for a few days.

This move sent a shockwave through my locker room, which prompted an entire team meeting. A large group of players were angry at my decision, and demanded that I allow the star player meet his goal of playing at the top level. I hadn’t looked at it from that angle, and so I reconsidered my decision. This calmed some players who were angry, but worried others who were happy I was firm for the sake of our team’s quality.

I brought the star player back up to the senior squad, on the bench but still in his capacity as captain, and started to just treat him with some baseline respect which seemed to help turn the team back towards my side. The few players angry to see him being shopped, however, started to get angrier and more unsettled, until it boiled over to an all-out confrontation after I was finally able to get a fair price for the player in question. Three players came into my office to demand explanations, and only two walked out satisfied. The third player never got over the decision and as a result, suffered throughout the season.

Frankly, this is an overwhelmingly amazing amount of detail and narrative style team politics that I don’t think I’ve ever seen in any sports game. There are some other simulators that have more interesting events in that the “news” that affect the players, but never have I seen them carry grudges on events that had nothing to do with them over several days, weeks, and months. I’m blown away, and I can’t describe how much more interesting this makes a game like this. A slight “human” element in an otherwise numbers and figures parade is just the twist that seals this as a masterpiece.

FM17 also calls out the Brexit decision as a factor in the world of football, and this plays out at random in your world. There are more “minor” Brexit scenarios where players are given special exemptions from the impending hardline immigration policies, but there is a third more severe setting as well which affects the movement of players in a ton of interesting and difficult ways. How this affects your squad depends on your location and how you do your scouting, and is an interesting real world twist to the action.

Almost as an afterthought, the game does have a 3D in-game display that shows quality highlights as the game progresses. This includes all new camera angles, as well as introduction rituals and meetings at the center of the pitch. You have the ability to make coaching decisions as the game progresses, and you can also get a sense of how players are reacting to different formations with the full 3D display.

The online gameplay is relatively the same as the local games, but with a bit more urgency and the element of multiplayer present. The game also has a mode which allows you to create a team from scratch, from the kits on up.

There is also a touch version of the game, Football Manager 17 Touch, which appears to me to be the exact same game simply optimized for a touch screen. I don’t have a touch screen computer, so I was unable to utilize those functions. However, I was able to go through the layouts and the “optimized for touch” skin, and I actually find it to be a much cleaner and better looking version for those even not using a touch screen.

Football Manager 17 is a titan of a game, representing a depth of knowledge, complexity, customization, and humanity that would be a welcome addition to any game on any subject. If football, or soccer as many a westerner calls it, is not your favorite sport, that may very well be the only reason to not give this game a twirl. While an expert may find some small issue, as a greenhorn I can’t report a single drawback for the game, but I can pretty much find a complement for each and every aspect of this marvelous simulator.

Patrick Rost has been with Gaming Trend since 2013. At first focused on sports coverage, Patrick has gone on to cover a wide range of games and other products for the website. Outside of Gaming Trend, Patrick writes and records music, grinds perpetually in Elder Scrolls Online (PS4), and lives day to day with his two dogs, Bob and Stella.
Related Articles: Football Manager 17
Share
Tweet
Share
Submit