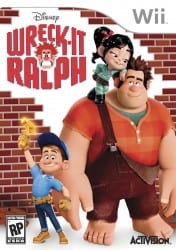 Wreck-It Ralph, as a brand entity, is perfectly suited for video game stardom. With the fantastic characters and creative atmosphere envisioned by Walt Disney Animation Studios, we know fans are going to love seeing their newfound favorite characters embark on an all-new side scrolling adventure.

The movie follows Wreck-It Ralph (Reilly), a Donkey Kong-esque arcacde villain who decides he wants to be the hero. The movie will be full of arcade references, and includes voice-overs from Sarah Silverman, Jack McBrayer and Jane Lynch. The game will be released on the Wii, DS and 3DS.