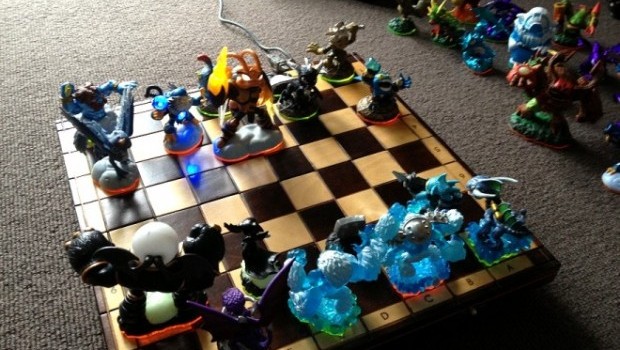 Let’s face it, one day our consoles are going to end up in that giant motherboard in the sky, and the portal of power that comes with the Skylanders games will lose it’s luster, and possibly an outlet to plug into.  However, that doesn’t mean that those Skylanders figures are useless once that happens.  Some very inventive kids came up with a great idea from the GeekDadGamer at the Wired blog.

But as I have written before it is their “Skylanders Chess” variant that holds their attention the longest. In fact I think we may have played this for longer than the main campaign in Giants.

Over time the rules have evolved and recently they took something of a leap forward. Having watched the various trailers and announcements for Swap Force they soon realized that they were going to have a spare Portal because the old one is no longer compatible (assuming we buy the new game).

Always keen to see technology put to novel uses I was please to come down stairs one morning and find that they had rigged up the portal under their Chess board. All that protruded was a wire running from the board to the front of the 360. I was intrigued.

So what exactly happened?  You can find out at the Wired blog here.  Trust me, it’s worth taking a look