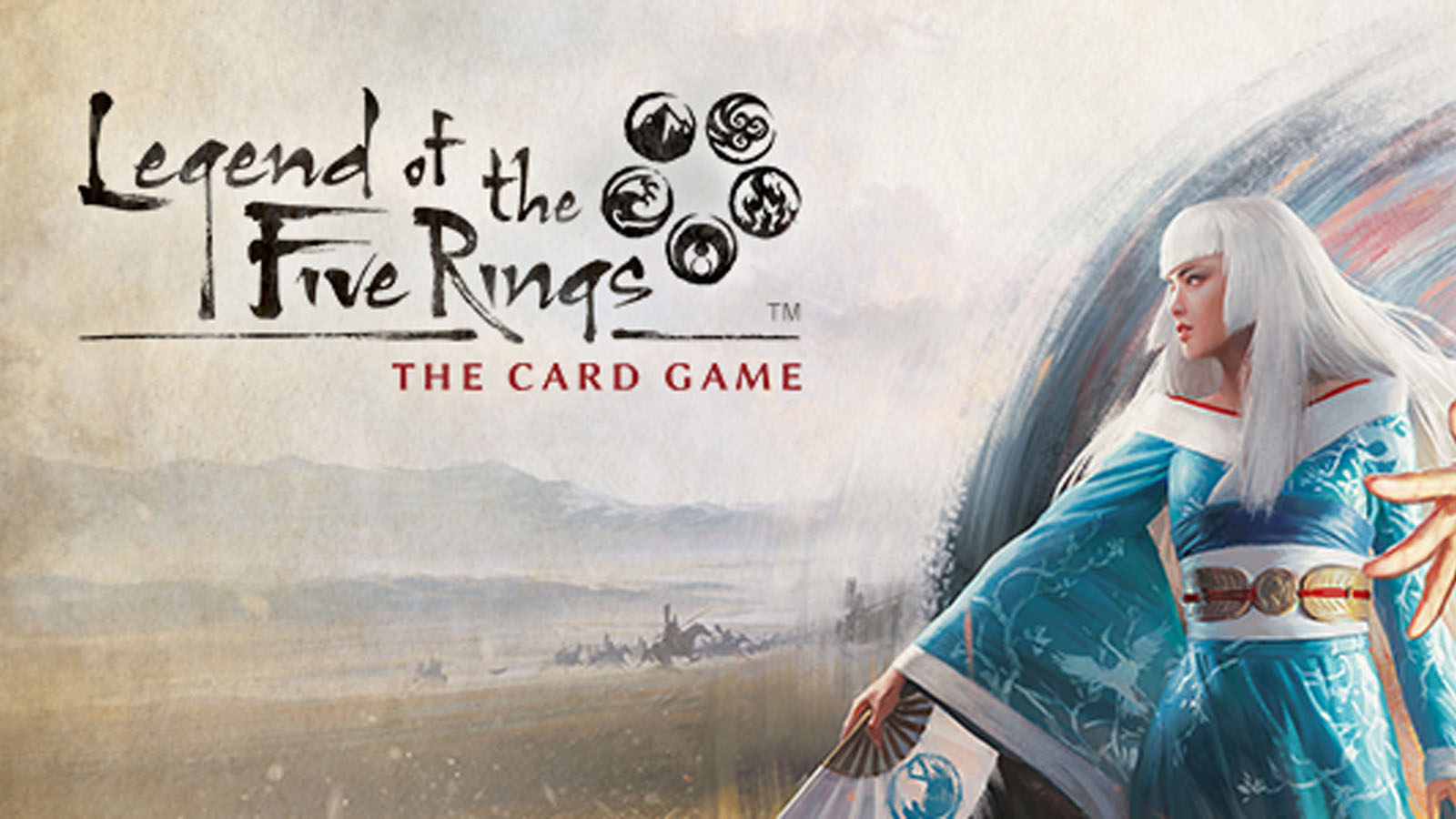 Fantasy Flight Games has announced the first Dynasty Pack of the Temptations cycle for Legend of the Five Rings: The Card Game, Twisted Loyalties. This new pack will include 60 brand-new cards to enhance your favorite decks and introduce new mechanics to the game. This new deck will be available in Quarter 4 of 2020.

The theme of this cycle, Temptations, revolves around the idea that each of the Great Clans has a desire or goal that they pursue no matter the cost, even when it may affect their primary “approach” to the conflicts in Rokugan. 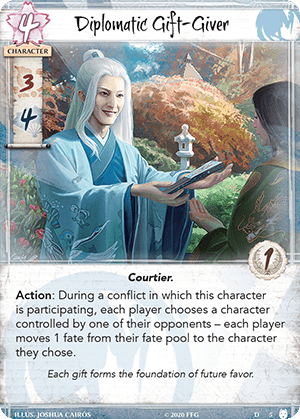 For example, the esteemed Crane Clan is tempted by the prospect of courtesy, even to one’s opponent. The abilities of new Crane cards like Diplomatic Gift-Giver and Superior Authority showcase this with effects that benefit (or hinder) both players equally. While it may seem difficult for a Crane player to come out ahead when giving into this temptation, a skilled samurai can use cards like Exemplary Etiquette at just the right time to shut down enemy attempts to take advantage of their courtesy.

Meanwhile, the proud Lion Clan is tempted by the prospect of honor. The Lion cards included in this expansion grant the player new ways to amass honor and gain additional rewards for earning enough of it in a single phase. Take the Renowned Singer and Revered Ikoma , for example. If you earn two or more honor in a single phase, then you can reap rewards from both of these Lion Clan Courtiers. This, of course, can be achieved in several ways, such as bidding less honor than your opponent in the draw phase, resolving the Air ring effect, or playing the new dynasty event Procedural Interference.

In addition to the theme of temptations, Twisted Loyalties introduces the new dire keyword. This keyword opens new possibilities for the samurai of Rokugan by granting a powerful ability to a card when it has no fate on it. The exact ability depends on the individual card in question, but there is no doubt that the dire keyword can change a player’s approach when deciding how much fate to put on a character. 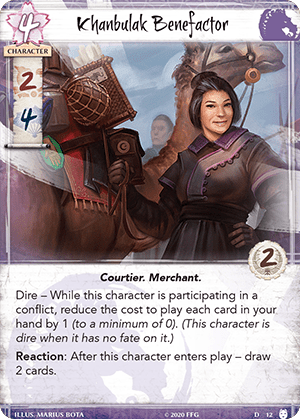 The Khanbulak Benefactor demonstrates this well. This fleeting Unicorn merchant lets you add two cards to your hand upon entering play, and, if she has no fate on her, she will also reduce the cost to play all of the cards in your hand (including the two you just drew) by one! This opens all kinds of new strategies to the player during a conflict, allowing them greater flexibility with the reduced fate costs, which could easily turn the tides in their favor. While the Benefactor can only provide this benefit for a single round, there’s no denying the impact that her dire ability will have on that round. This, of course, leaves the player with an important decision to make: how much fate should be placed on the Benefactor in order to best prepare for her final round?

As bonds are tested and the Great Clans give in to temptation, players of all clans will continue to develop new strategies for Legend of the Five Rings: The Card Game. Steel your resolve, outwit your opponents, and brandish the new tools provided in Twisted Loyalties!

If you’re looking to mix of your favorite deck even more you can pre-order this today! Stay tuned to Gaming Trend for all your tabletop news.