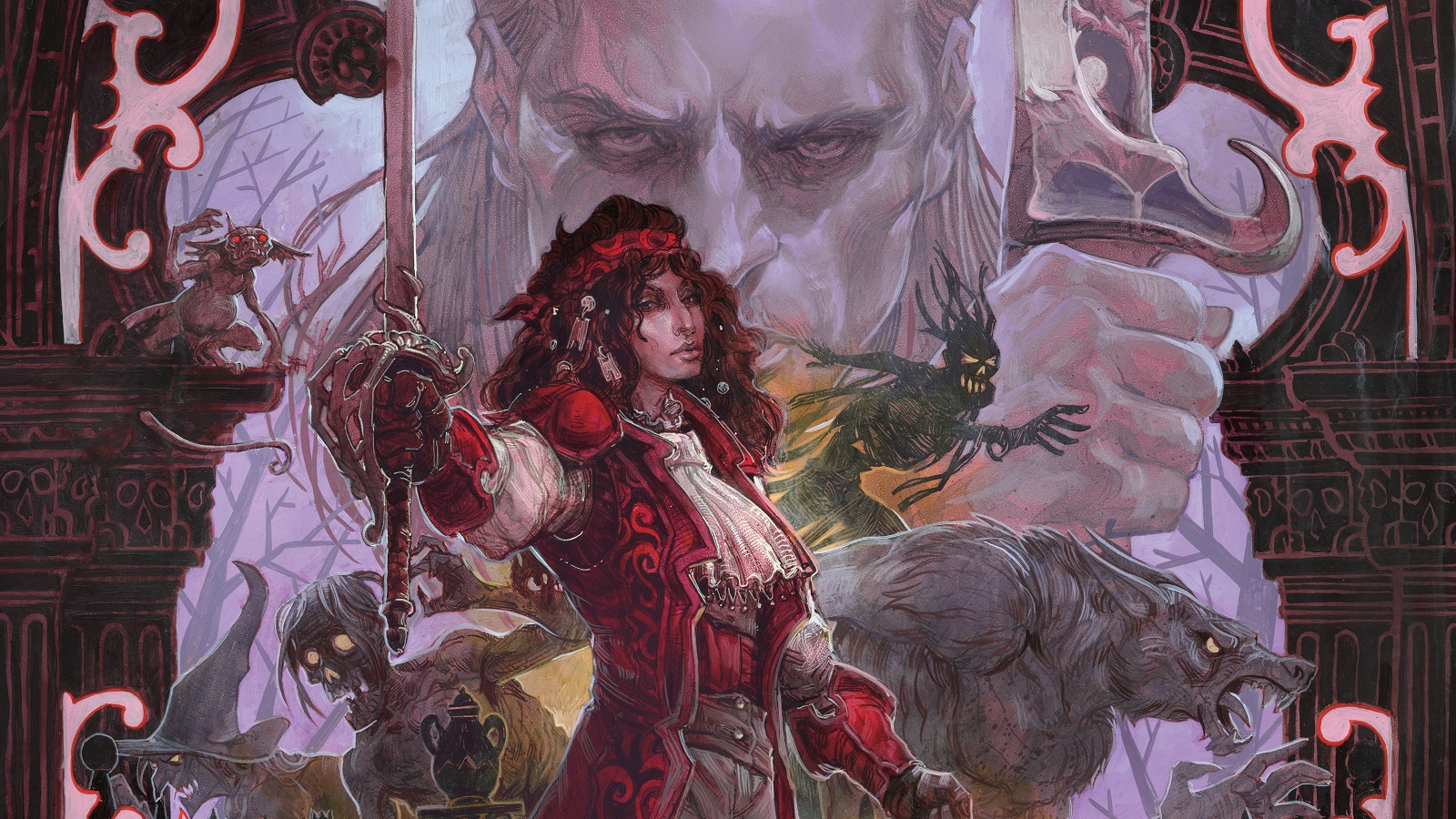 Wizards of the Coast’s Dungeons & Dragons team has announced the next book in the line-up of products for 5th edition D&D. Focus on expanding the dreaded, mist-enshrouded realm of Ravenloft, Van Richten’s Guide to Ravenloft will enable Dungeon Masters and players to bring horror into their games:

One of the most popular adventures published by D&D in the last few years was Curse of Strahd which begins when characters are pulled by creeping mists into a land called Barovia. But Strahd’s domain is just one of the many Domains of Dread that make up the horror-themed setting of Ravenloft. Van Richten’s Guide to Ravenloft refreshes the setting by giving Dungeon Masters descriptions of more than 30 Domains of Dread beyond Barovia as well as the tools to create their own horrific stories, including details on each domain’s Darklord, a ready-to-play adventure, new monsters, lineages and sub-classes.

Player’s familiar with the Ravenloft setting from previous editions, may have been wondering about what else is hidden behind the veil of mists surrounding Ravenloft. Limited to just Barovia in the 5th edition Curse of Strahd adventure, the setting definitely has room for expansion, and Van Richten’s Guide pulls back the veil to dozens of other Domains of Dread scattered in the mists. Led by senior game designer, Wes Schneider, the team at WotC has compiled a resource book that hands Dungeon Masters the tools they need to create their own horrific stories. 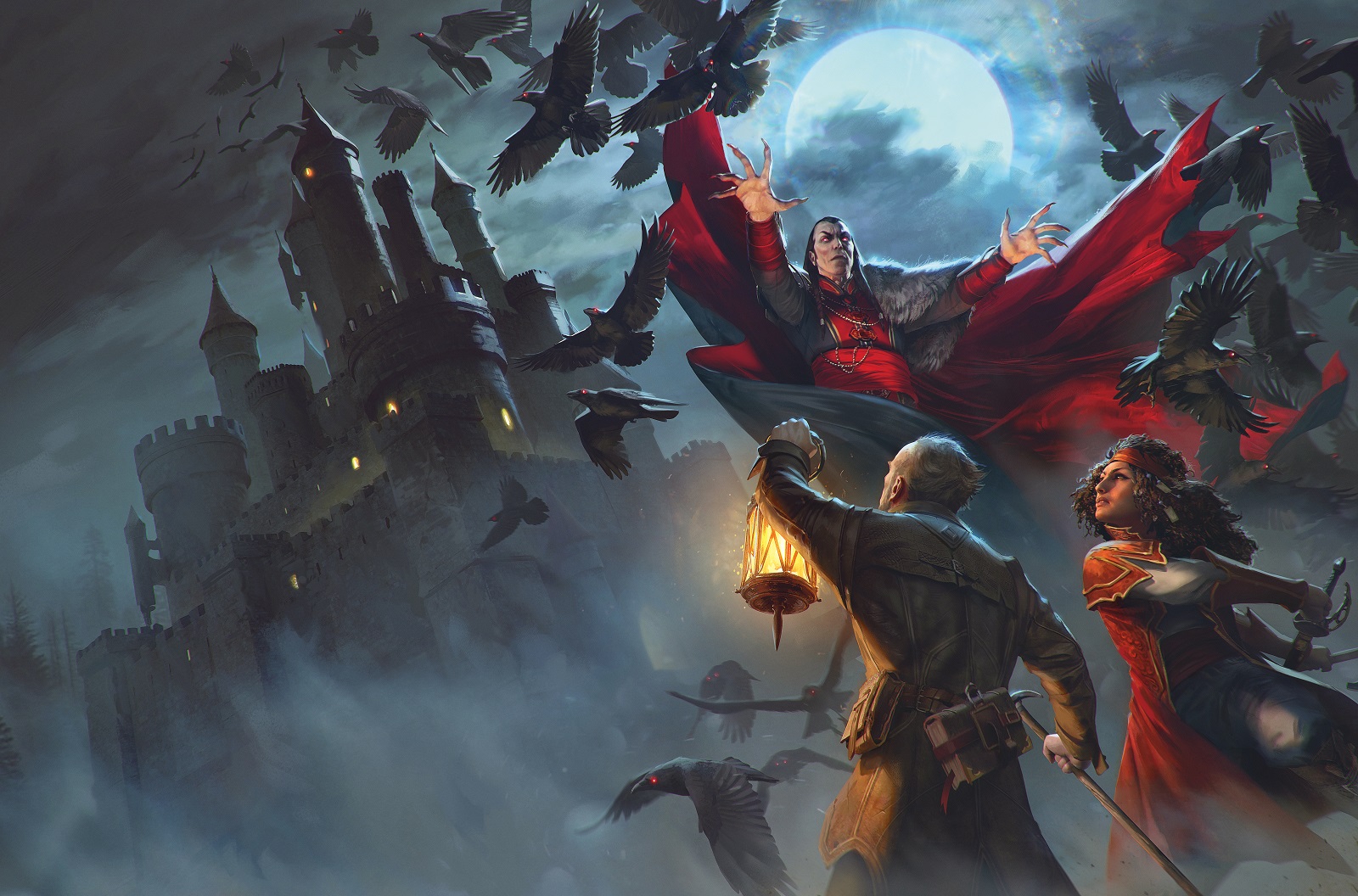 The standard cover by Anna Podedworna.

While Strahd’s Barovia setting is steeped in gothic horror, the other Domains of Dread give players and DMs alike the chance to explore other genres of horror. There’s a creepy setting called Dementlieu, which looks at fairy tales through a surreal, twisted lens. A zombie apocalypse inspired setting called Falkovnia gives DMs the opportunity to test the PCs’ mettle against hordes of undead. An Indian mythology and folklore inspired setting called Kalakeri is set in a rainforest domain where two evil powers struggle in an endless war for dominance. A Most Dangerous Game-inspired setting gives PCs the opportunity to run through a different jungle. There are settings that easily host the classic Victorian monsters such as mummies, vampires, werewolves, and monsters cobbled together in a laboratory. Those are just a sampling of the many different genres of horror players can explore in the Domains of Dread, there are cosmic horror, body horror, urban legends and others as well. 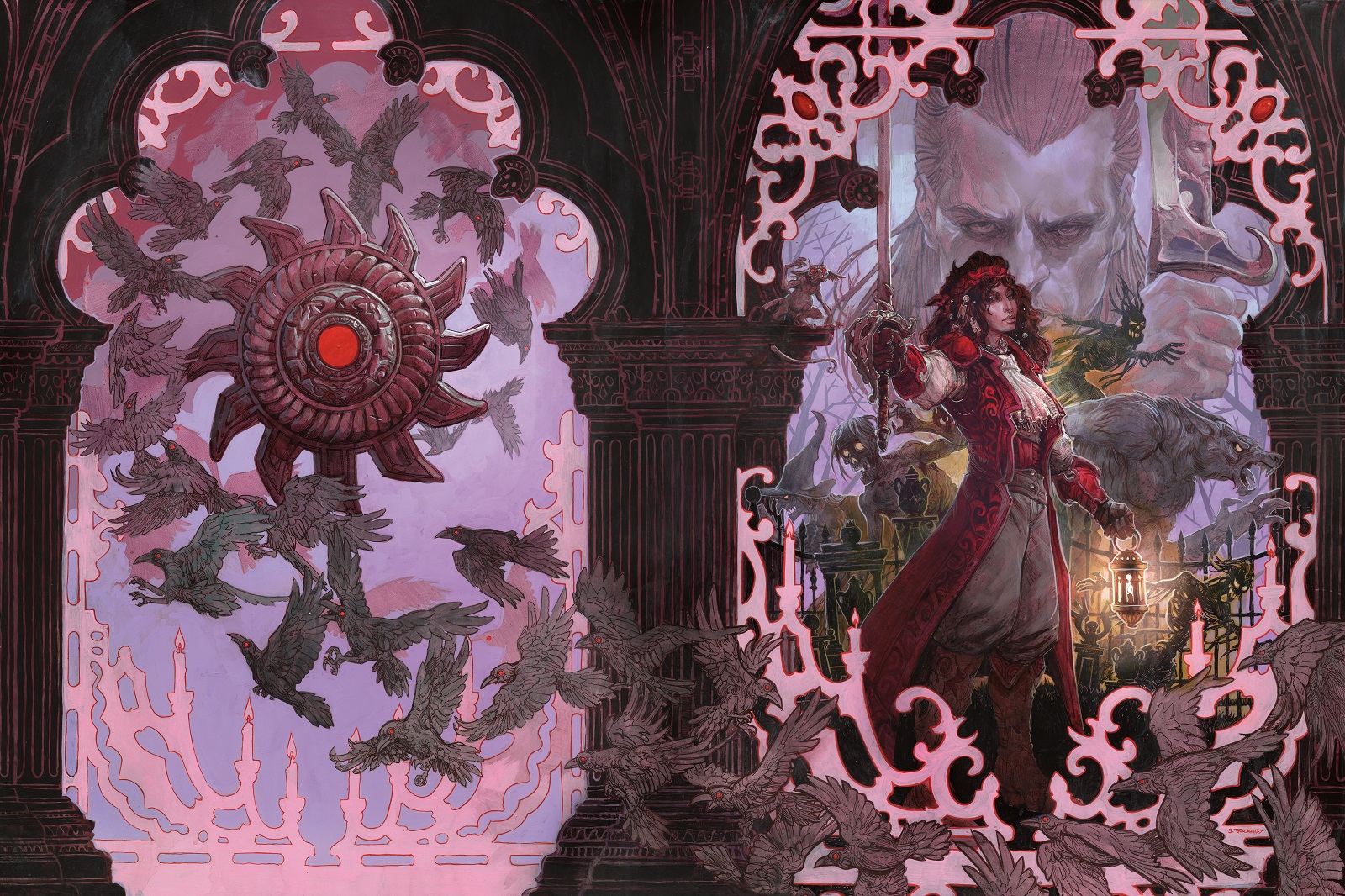 Like Barovia, with the overshadowing presence of Strahd, each Domain of Dread has a Darklord. For example, in Lamordia, where undead creations invoke the feel of Frankenstein’s Monster, the Darklord Dr. Viktra Mordenheim is behind the experimentation. But for those who can’t find exactly what they are looking for, there is a section in the book that guides DMs in the creation of their own Darklord and associated Domain of Dread. And for those that are looking for a quick start on some horror adventuring, there is an adventure included in the book that takes place in the House of Lament (players of previous editions may recognize that setting as a storm-wracked, stone mansion set in an overgrown, estate stuck in an eternal autumn). 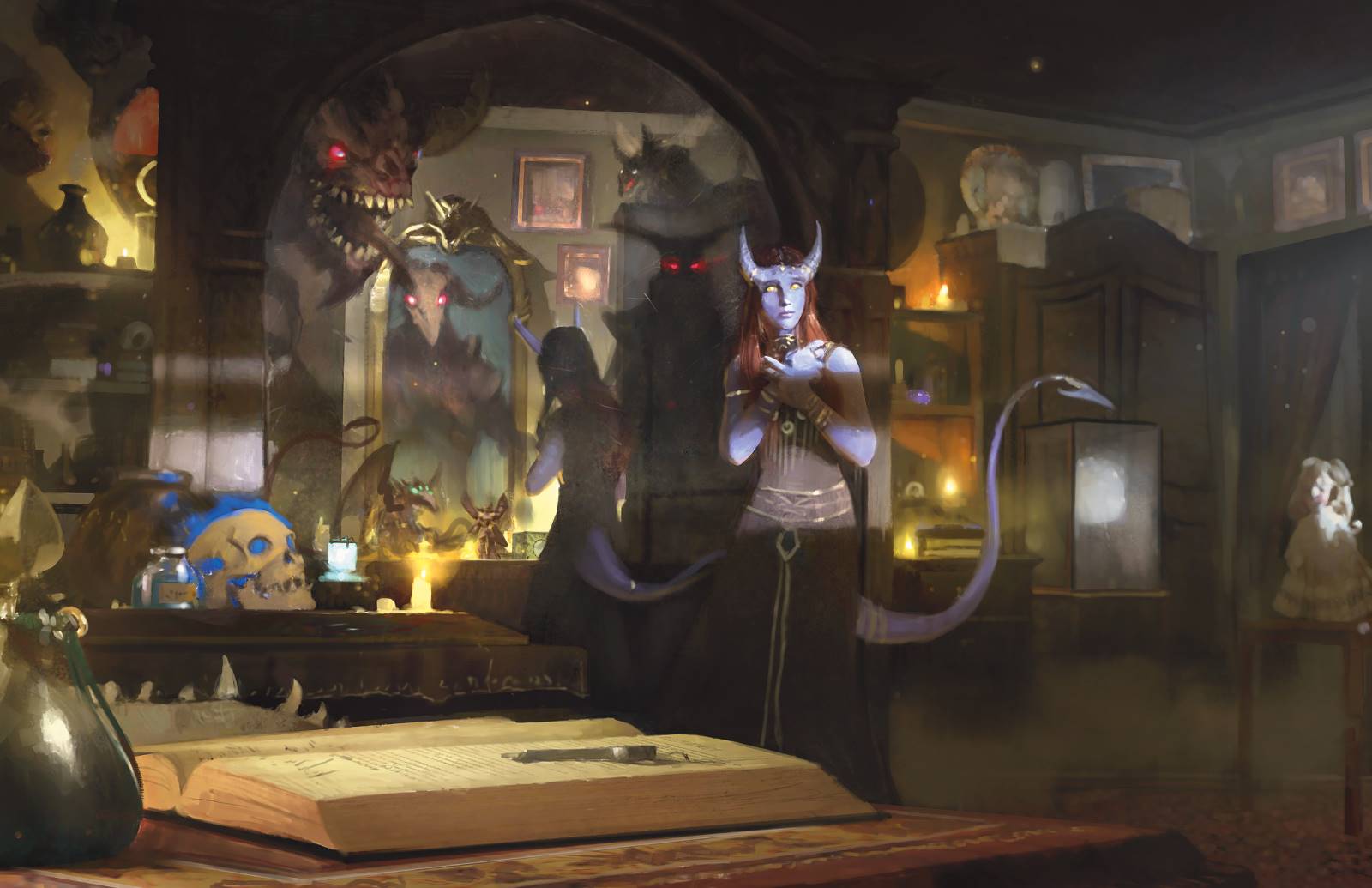 A terrified tiefling gives a glimpse into a horror-themed game, painted by Scott M. Fischer.

Players get some goodies too with an assortment of horror-themed player options. Warlocks get a new pact option allowing for an Undead patron with all the horrific benefits that might entail. Bards will have the College of Spirits as an option. There will be new backgrounds and items to collect as well. To draw their characters deeper into the horror themes presented in the book, the guide has a section on Dark Gifts that provide benefits while imposing potentially deadly detractors on the PCs. PCs can use the information in Van RIchten’s Guide to describe how their player may be suffering from a haunting. There will also be lineages that PCs can use to twist their character’s race into either a dhampir (descended from a vampire) or a hexblood (descended from a hag), making their PC’s origin darkly suited for a horror setting.

Look for the frightening appearance of Van Richten’s Guide to Ravenloft on the 18th May, with two covers, a standard cover by Anna Podedworna available everywhere and an alternate cover by Scott M. Fischer only available through game stores. 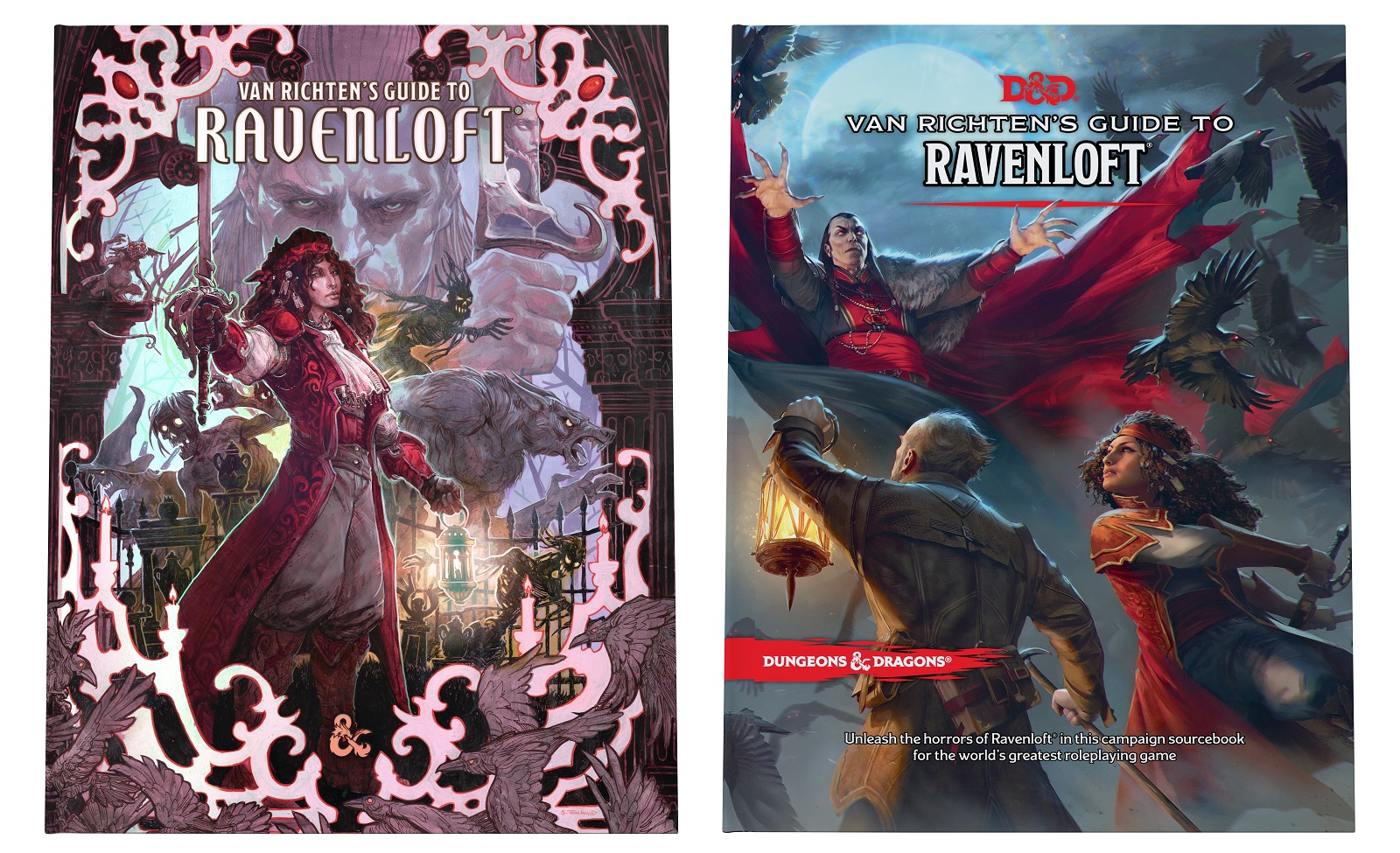